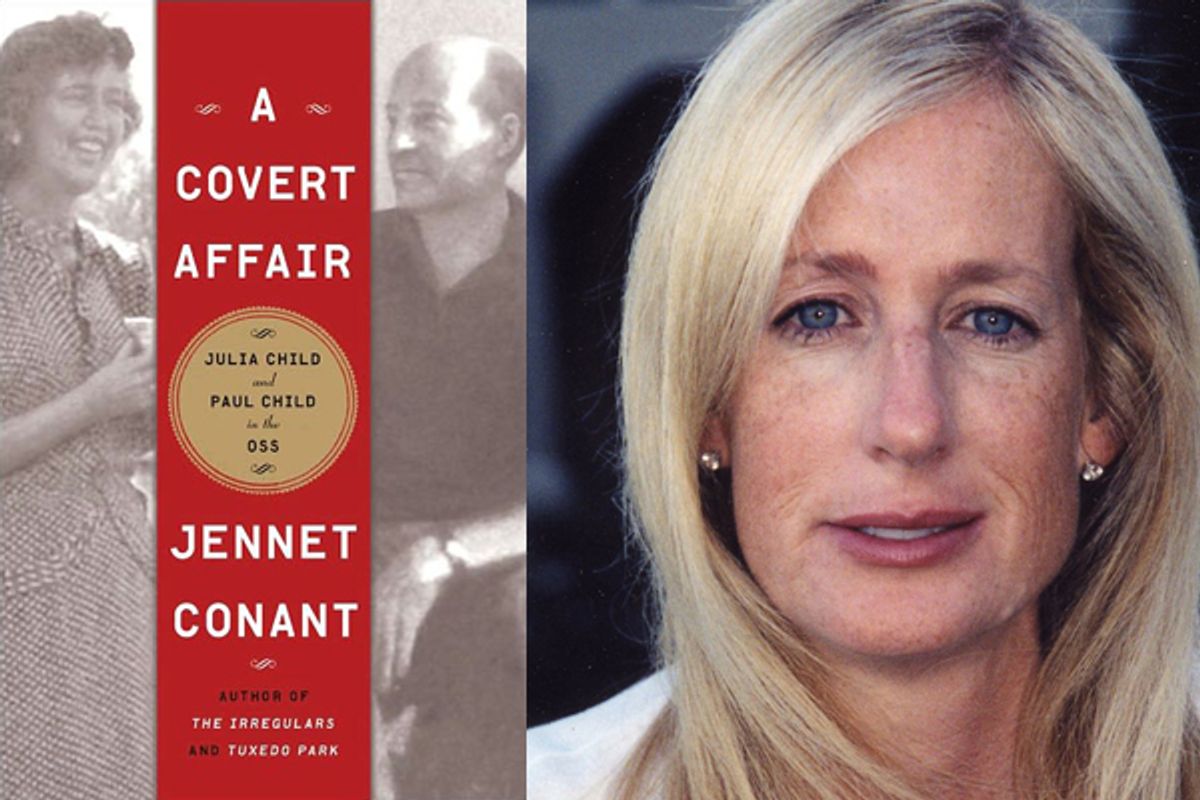 Shrewd marketing and its online equivalent, SEO (search engine optimization), dictate that Julia Child's name gets top billing in both the title of Jennet Conant's new nonfiction spy saga and in the headline for my review of the same. Yes, the famous French chef of cookbook and public television fame did work for the OSS (Office of Strategic Services), a U.S. intelligence agency, during World War II, as did Paul Child, the man she would eventually marry. However, Julia Child's war was not so exciting as Jane Foster's, and if Conant's "A Covert Affair: Julia Child and Paul Child in the OSS" is somewhat of a bait-and-switch, providing more of Foster's story than Child fans will expect, it's hard to complain: Foster is such a remarkable, engaging, ambiguous character.

Foster and Julia McWilliams (Child's maiden name) were part of a cohort of women (invariably referred to as "girls" by their colleagues) who signed up to work for William "Wild Bill" Donovan's OSS during the war. They wanted to serve their country, but most of them -- Julia especially -- were looking for adventure, too. Foster's ability to speak Malayan (the legacy of a brief marriage to a Dutch diplomat in her early 20s) and Julia's superior administrative skills made them desirable recruits. So did their backgrounds.

Both women were from wealthy, prominent, conservative California families and had gone to tony women's colleges, as did Betty MacDonald, one of Conant's primary sources. The word around the OSS offices was that Donovan's idea of the ideal female hire was "a cross between a Smith graduate, a Powers model and a Katie Gibbs secretary." He liked to recruit rich Ivy Leaguers of both genders, reasoning that they were more resistant to bribes. Julia -- tall, a bit gawky and unworldly -- was intent on livening up her own personality after a youth spent in the narrow-minded upper echelons of Pasadena society. Foster, on the other hand, devoted herself to livening up everyone else's.

Foster seems to have adopted the "madcap heiress" of 1930s Hollywood comedies as a role model. In her first posting, Ceylon, Foster adopted a baby chipmunk, which she raised, named Christopher and took to carrying around in her pocket. The animal's many escapes and Foster's subsequent pursuits led to absurd scandals, such as the time Foster crawled under a table to look for the rodent and ran her hand up a general's pant leg. Charged with Morale Operations (propaganda), Foster devised a notorious operation in which hundreds of condoms were stuffed with anti-Japanese tracts and malaria medication then released by passing submarines off the coasts of Malaysia and Indonesia. She ran local agents and helped devise bogus news reports that mimicked Japanese broadcasts but were subtly tweaked to offend the native population of enemy-occupied territory.

Foster's duties resembled those of a CIA case officer, although the CIA did not yet exist; Julia, on the other hand, ran the OSS camp's "nerve center," compiling the research that came in from the field and dispatching it to Washington and the field operations that needed it. Arguably, Julia's was the more important job (she had a higher security clearance), but Foster's was the more thrilling. And while the levelheaded, famously discreet Julia spent her time in the CBI (China-Burma-India) theater pining over Paul Child, who would not realize how perfectly suited they were to each other until after the war, Foster had tragic affairs, got into countless comical scrapes and saw much more of the conflict firsthand.

Things began to go wrong for Foster after the war, when she was sent to Indonesia and Vietnam to help supervise the liberation of POWs and otherwise keep an eye on things. The U.S. was so focused on rebuilding Europe that it was willing to sacrifice many Asian allies who had expected to be granted independence as a reward for helping to defeat the Japanese. Instead, the old, hated, European colonial powers began to reestablish their hold, unimpeded by the Americans. This outraged Foster, who witnessed atrocities and other injustices committed by Dutch and French troops against Indonesian and Vietnamese civilians and believed the U.S was seriously undermining its own interests. She wrote a blistering white paper condemning American policy in Indonesia (it was ignored) and quit her government job to head back to the States.

Meanwhile, after weathering a rough-and-ready posting in Chungking ("It's dirty beyond belief, utterly inconvenient, full of disease, misery, corruption and mystery," Paul Child wrote to his twin brother, "but I love it."), the Childs finally concluded their long courtship. He went to work for the United States Information Service in Paris and she decided to learn to cook. They would not reconnect with Foster until 1952, when they discovered that she, too, was living in Paris, working as a painter under the name Madame Zlatovski. (She had married -- or rather, remarried, since it turned out she'd been secretly married to a Russian immigrant throughout the war.) They found her, in Paul's words, "just as lazy, hazy, impractical and loveable as she was seven years ago."

The happiness of that reunion was short-lived. Foster and her husband were soon embroiled in the Red Scare, and Paul Child himself was briefly and scarily caught up in the slipstream of her troubles. "A Covert Affair" is a skillfully told tale of espionage, combining just enough background information with the right amount of boisterous anecdote to make the reader feel simultaneously amused and informed. For the early parts of the book, Conant leans heavily on Foster's own memoirs, as well as Paul Child's marvelous letters home. But when she gets to Foster's indictment by a federal grand jury on charges of espionage for the Soviet Union, she has to pick her way across far more uncertain ground. She does so with aplomb.

Was Foster a Soviet spy or a victim of overzealous anti-Communist crusaders who were far too willing to believe the testimony of a showboating informer who also happened to be a proven plagiarist and con man? Without relinquishing her fundamental sympathy with Foster, Conant faults her subject for "her denial and her self-delusion" as well as her refusal "to confront the truth about herself at the most fundamental level."

The larkish first half of "A Covert Affair" gives way to a much darker but more intriguing consideration of how personality becomes destiny; the very qualities that make Foster so much fun to read about also led to her downfall. The Childs are relegated to the sidelines in this final act, but it hardly matters; by that point, Foster is the one you really care about. Her considerable talents went to waste after the war, mostly because she insisted on saying things about Southeast Asia that the officials back home just didn't want to hear. No surprise, they all turned out to be true.