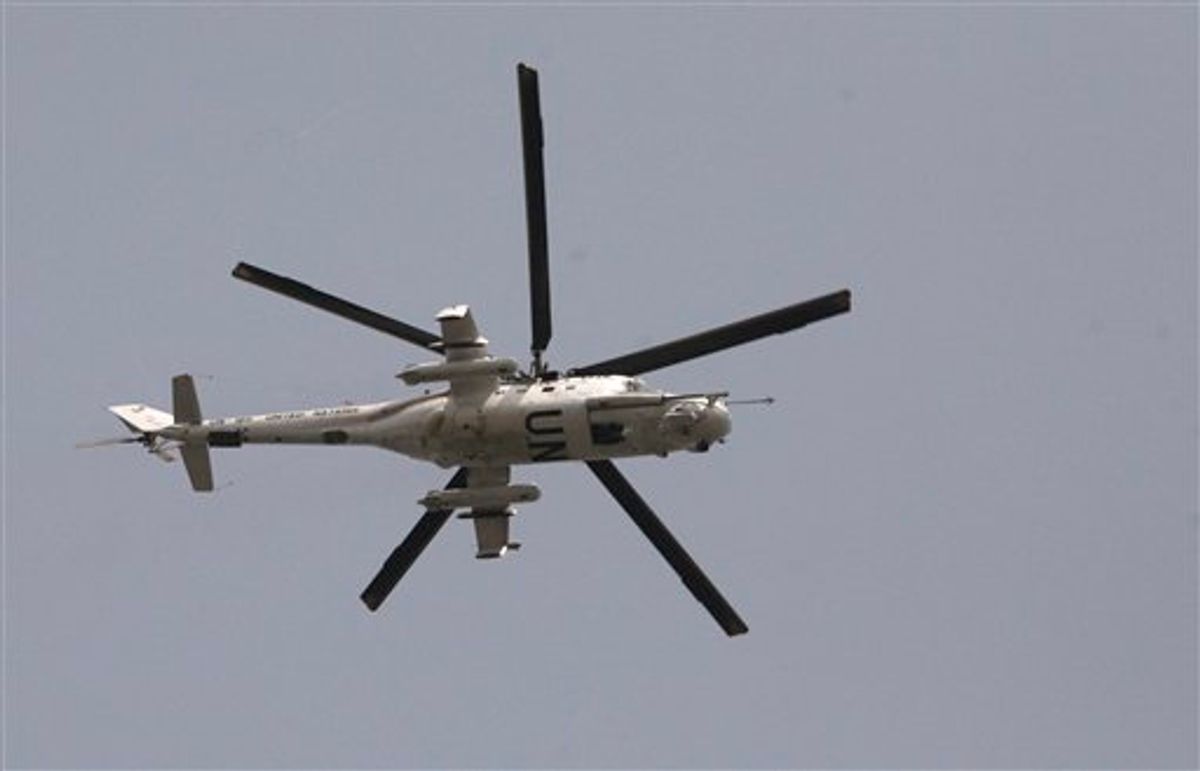 A UN helicopter pass over the city of Abidjan, Ivory Coast, Friday, April 1, 2011.Heavy fighting raged Friday near Ivory Coast's presidential palace and mansion and the state TV broadcaster as armed forces loyal to the elected leader tried to install him to power and oust the country's strongman. (AP Photo/Emanuel Ekra) (AP)
--

The United Nations mission in Ivory Coast began moving some 200 employees out of the main city Sunday after repeated attacks on its headquarters, as fighters loyal to the internationally recognized president prepared for a battle to oust the incumbent leader.

Sporadic gunfire rang out in central Abidjan on Sunday, and residents for the most part kept in their homes. Residents of the commercial capital have been restricted to their homes since forces supporting internationally recognized president Alassane Ouattara began their assault of Abidjan on Thursday. Electricity has been cut intermittently and the water was shut off citywide Sunday morning, though a few women could be seen on the street filling basins with water from the lagoon.

"There is an in-country relocation of some 200 of our staff in order to ensure their safety in the currently challenging security environment. There are no plans to evacuate them from the country," said Nicholas Birnback, a spokesman for the U.N. Peacekeeping Department.

A U.N. employee said they were taken by helicopter from the U.N. base in downtown Abidjan to the airport. Another helicopter will take them from there to the northern city of Bouake.

The person asked not to be named because they are not authorized to speak to the press.

On Saturday, incumbent leader Laurent Gbagbo called on his supporters to descend into the streets to form a human shield around the presidential palace. Boatloads of youth were ferried into the center of town and have been coursing the streets carrying rudimentary weapons such as two-by-fours and metal bars.

Ouattara's camp reports that the vast majority of the military has defected to his side, leaving only a small contingent of fighters to defend Gbagbo.

The U.N. reported that elite Republican Guard forces have repeatedly attacked its convoys and patrols. On Saturday, four peacekeepers were seriously injured after they were fired upon in the center of the city. The U.N. previously reported having returned fire on the Republican Guard and injured five of it soldiers. Pro-Gbagbo forces first attacked its headquarters on Thursday.

One U.N. employee was killed by a stray bullet last week.

Meanwhile, the Abidjan airport was taken over Saturday by French and U.N. soldiers, a French military spokesman said.

French soldiers are in Ivory Coast under the same U.N. mandate as the U.N. peacekeeping force and its primary mission is the protection of civilians. More than 1,650 foreigners have sought refuge at the French base, half of whom are French, Daguillon said.

Ouattara was declared the winner of last November's presidential election by the country's election commission and numerous international observers. Gbagbo refused to recognized the results and has clung to power for four months, despite international financial sanctions. Forces allied with Ouattara launched a military offensive last week and advanced rapidly across the country, meeting almost no resistance.

They reached the edges of Abidjan last Thursday, but haven't been able to take key targets like the main army base, the state television station, the presidential residence or the presidential palace.