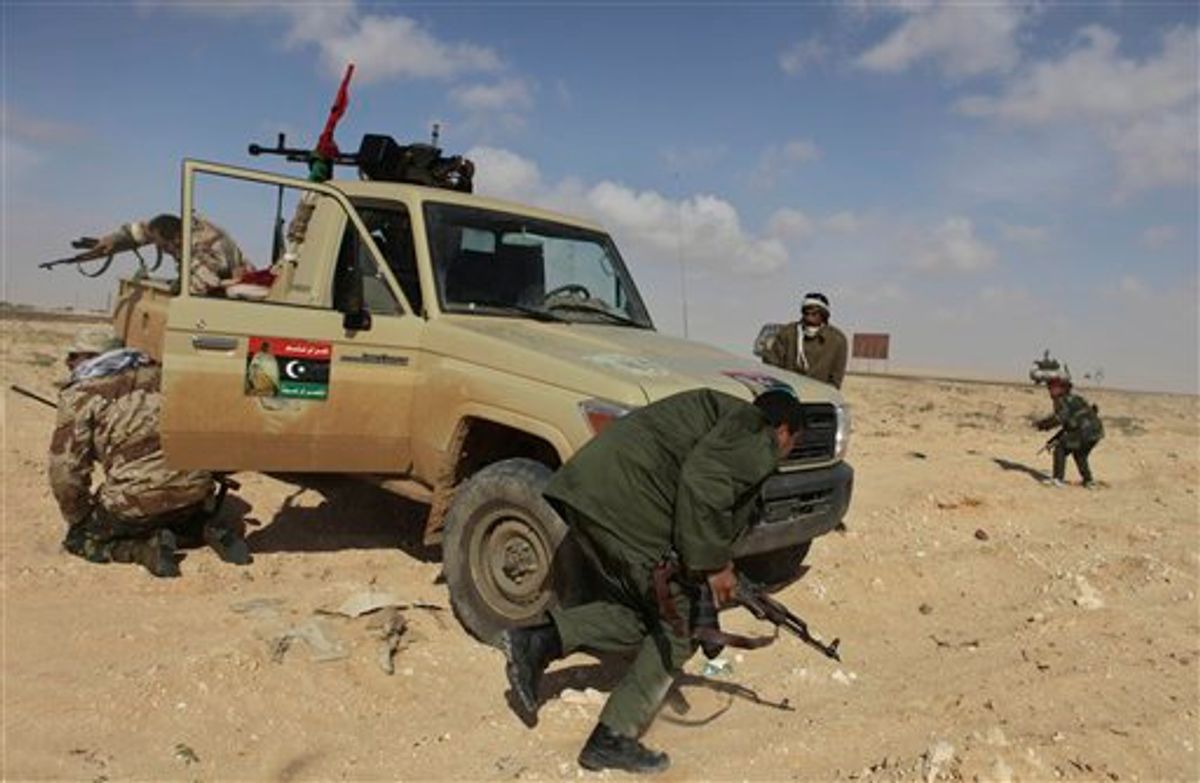 Libyan rebels run for cover after coming under heavy artillery fire from pro-Gadhafi forces along the front line near Brega, Libya, Friday, April 1, 2011. Libya's rebels will agree to a cease-fire if Moammar Gadhafi pulls his military forces out of cities and allows peaceful protests against his regime, an opposition leader said Friday as rebels showed signs that their front-line organization is improving. (AP Photo/Altaf Qadri) (AP)
--

The U.S. agreed to NATO's request for a 48-hour extension of American participation in coalition airstrikes against targets in Libya and U.S. lawmakers cautioned Sunday the allies need to know more about the rebels fighting Moammar Gadhafi's forces before providing them with weapons.

Two weeks into the assault on Gadhafi, Republican lawmakers expressed concern that a stalemate could leave him in control of portions of Libya and with access to stockpiles of chemical weapons.

The U.S. is shifting the combat role to Britain, France and other NATO allies, but American air power is still in demand. Air Force AC-130 gunships and A-10 Thunderbolts and Marine Corps AV-8B Harriers will continue to attack Gadhafi's troops and other sites through Monday evening. These aircraft are among the most precise in the American arsenal.

After Saturday, no U.S. combat aircraft were to fly strike missions over Libya unless NATO officials specifically asked and authorities in Washington gave their approval. NATO assumed full control last week from the U.S.-led international force for all aspects of the operation in Libya as authorized by U.N. resolutions that include an arms embargo, enforcing the no-fly zone, and protecting civilians from Gadhafi's forces.

In an emailed statement, NATO spokeswoman Oana Lungescu said Sunday that "poor weather conditions over the last few days" were the reason the alliance made the request. She would not elaborate. "This is a short-term extension which expires on Monday," she said.

A senior U.S. military official said heavy cloud cover over Libya late last week curtailed allied airstrikes. Gadhafi took advantage of the lull, pushing east into the port cities of Ras Lanouf and Brega, the official said on condition of anonymity to discuss sensitive military planning. The 48-hour extension is intended to roll back the progress made by Gadhafi's army, the official said.

A decision yet to be made by the Obama administration is whether to arm the rebels with the firepower they need to take and hold ground against Gadhafi's forces.

Rep. Mike Rogers, R-Mich., the chairman of the House Intelligence Committee, said there may be strains of al-Qaida within the rebel ranks and that the coalition should proceed with caution before arming them.

"We know they're against Moammar Gadhafi remaining in power, but we don't know what they are for," Rogers said.

"I think at this stage we really don't know who the leaders of this rebel group are," said Reid, D-Nev.

But Rogers also warned that if there were a stalemate in Libya, a cornered Gadhafi might resort to extreme measures against the opposition forces, such as the use of chemical weapons. Rogers said he has been to Libya and seen Gadhafi's chemical weapons.

"I think you have to worry that he's a terrorist threat," Rogers said.

Sen. Lindsey Graham, R-S.C., said the coalition needs to take the air war to Libya's capital where Gadhafi and his inner circle are located. Striking targets in Tripoli will further fracture Gadhafi's government and push the Libyan leader from power, he said.

Like Rogers, Graham said he's concerned over the prospect of a stalemate in Libya. A member of the Senate Armed Services Committee, he faulted President Barack Obama for putting the U.S. into a supporting role and shifting the main combat burden to Britain, France and other NATO allies.

"To take the best air force in the world and park it during this fight is outrageous," Graham said. "When we called for a no-fly zone, we didn't mean our planes."

Allied military operations against Gadhafi's forces began March 19 with missiles and bombs targeting Libya's air defenses, communications networks, and ground forces. Obama has ruled out the use of U.S. ground troops in Libya. But the opposition lacks the proper organization and equipment to push back Gadhafi's army on its own.

Sen. John McCain, the top Republican on the Senate Armed Services Committee, said failing to arm the rebels could allow Gadhafi to maintain control over large swaths of Libya.

"We are concerned that regional support will waver if Western forces are perceived as presiding over a military deadlock," McCain and Sen. Joe Lieberman, a Connecticut independent, wrote Friday in The Wall Street Journal. "We cannot allow Gadhafi to consolidate his grip over part of the country and settle in for the long haul."

Navy Adm. Mike Mullen, the chairman of the Joint Chiefs of Staff, said in congressional testimony on Thursday that as few as 1,000 among the rebels are former members of Gadhafi's military.

The rest are simply "guys with guns," said James Dubik, a retired Army three-star general who says they need American or NATO advisers and trainers to be effective. "They need help," Dubik wrote in an assessment for the Institute for the Study of War, a think tank in Washington.