Did a Quran burning really cause Afghan violence?

Many blame a Florida pastor's desecration for dozens of deaths in Afghanistan. Is it more complicated than that? 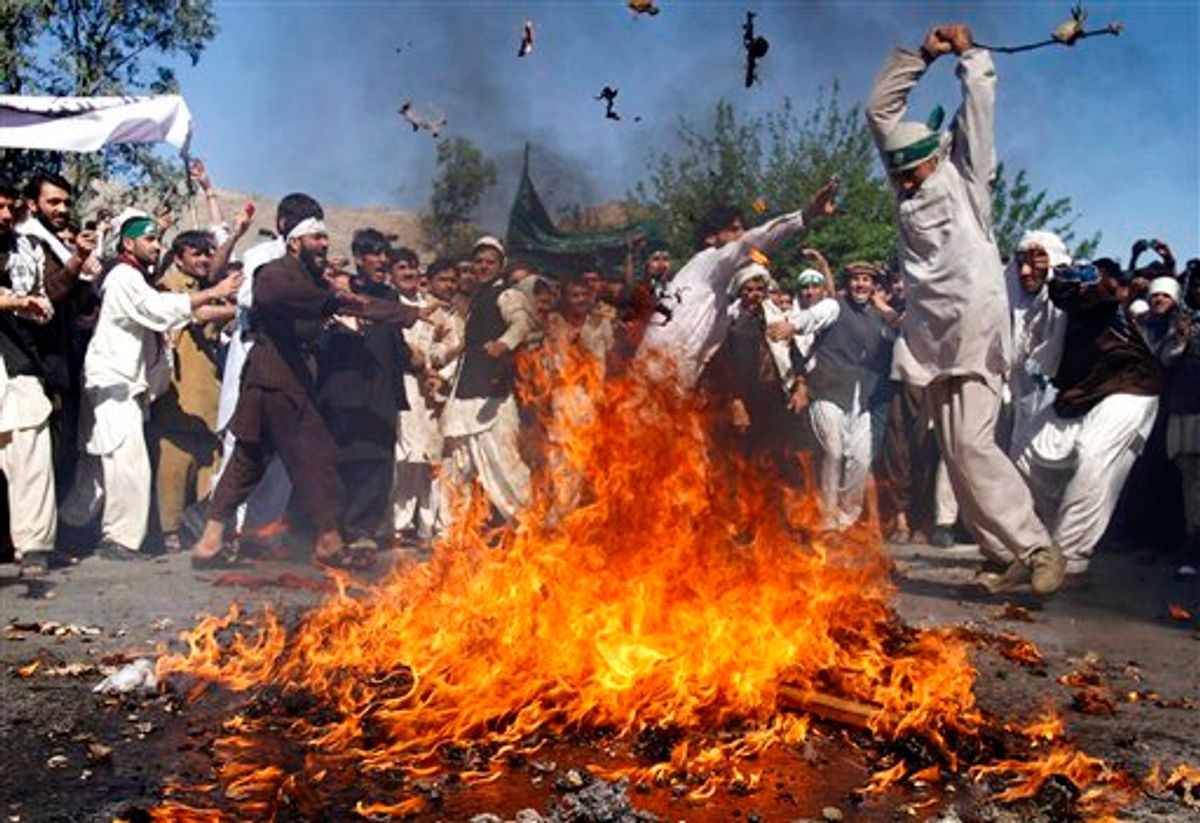 An Afghan protestor beats a burning effigy of U.S. President Barack Obama during a rally in Jalalabad, Afghanistan on Sunday, April 3, 2011. Afghan protests against the burning of a Quran in Florida entered a third day with a demonstration in the major eastern city Sunday, while the Taliban called on people to rise up, blaming government forces for any violence. (AP Photo/Rahmat Gul) (AP)
--

A little more than two weeks ago, Florida pastor Terry Jones orchestrated a bizarre mock-trial against the Quran in his Gainesville church. At its conclusion, Jones set fire to the holy book. In a different era, the episode would probably have been little more than an afterthought. And, to be sure, it's just one example among many acts of fringe Islamaphobia in a post-9/11 America. However -- driven in large part by the power of the Internet -- video of the burning has triggered days of mass protests across Afghanistan. Thus far, at least 20 people -- including several United Nations officials -- have been killed.

The reports of violence have triggered a strong U.S. response. Gen. David Petraeus said Sunday that Jones' actions have compromised U.S. operations in Afghanistan. Meanwhile, Senate leaders on both sides of the aisle have suggested that formal action be taken against Jones.

There's certainly no denying that Jones' Quran-burning stunt has begotten anger. Nor is it a surprise. Similarities abound to the deadly protests in 2006 that followed in the wake of a series of Danish political cartoons depicting the Prophet Mohammad. However, the widely reported narrative about the  protests -- particularly the idea that a straight line can be drawn from Terry Jones to this weekend's violence -- may be too simple. The Los Angeles Times reported today that while the demonstrations themselves were an organic response to the Quran burning, the acts of violence might actually have been instigated by Taliban operatives with the express purpose of subverting otherwise-peaceful protests.

Both Afghan and Western officials cited mounting evidence that insurgents had seized the opportunity to infiltrate crowds of demonstrators in both Kandahar and Mazar-i-Sharif, concealing themselves among those who otherwise might have marched relatively peacefully.

[One U.N. official] said the three Europeans who died in the Mazar-i-Sharif compound were not victims of random mob violence but were hunted down in the bunker where they had taken refuge. Afghan officials, who have made dozens of arrests in connection with the assault, said evidence so far suggested that the main instigators were allied with the insurgency.

None of the several Afghan citizens interviewed by the Christian Science Monitor supported acts of violence against U.N. officials. However, the story of Jones' desecration has caught on like wildfire in the conflict-battered country. The Taliban, it appears, have successfully used the incident as a springboard for an invigorated wave of anti-Western sentiment and violent retribution against occupying forces.

In a place like Afghanistan, where the vast majority of the populace is illiterate and many lack regular access to reliable news outlets, perception and rumors often become more important than facts. Now that the story of the Quran burning has spread, it almost does not matter how strongly US officials – from President Barack Obama to Gen. David Petraeus – condemn Jones’s actions. The damage has been done.