What pop culture misses about cancer

The powerful disease has never been laid bare like it is in "The Emperor of All Maladies." We speak to the author 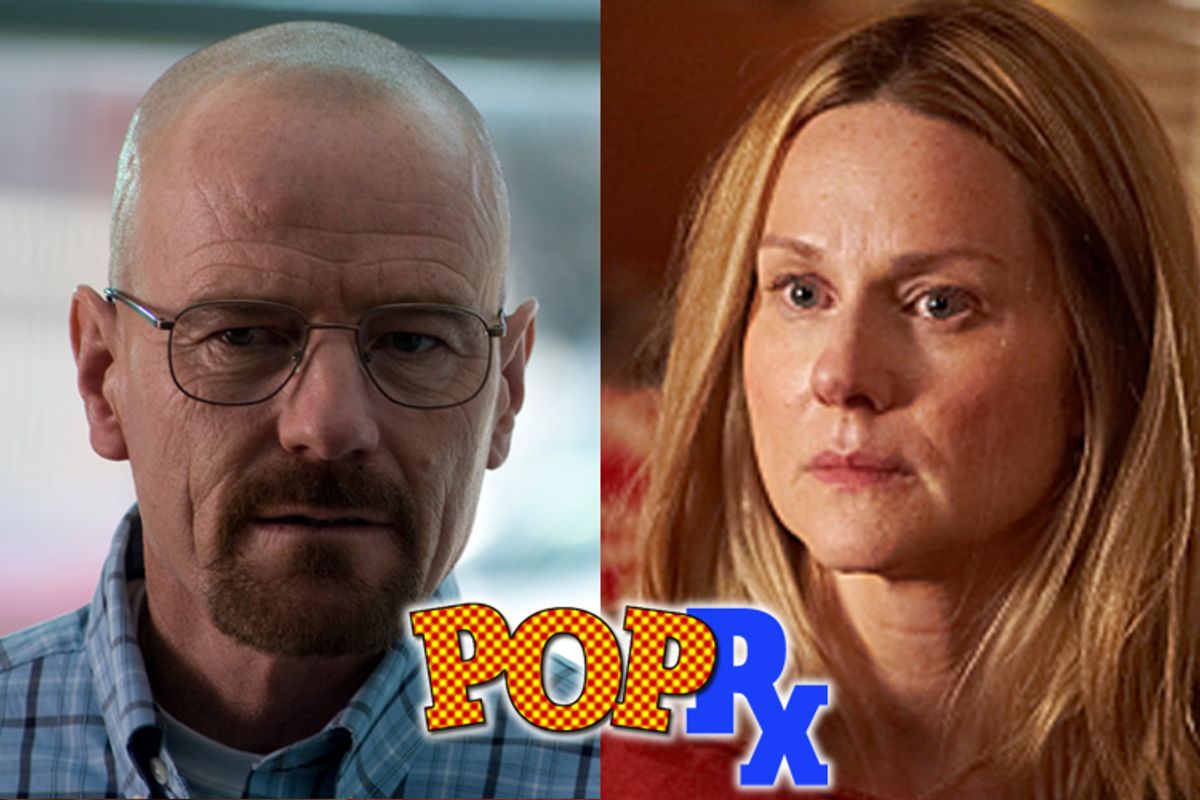 Cancer runs deep in our culture's veins. It's hard to find someone who hasn't been affected by this family of diseases, either directly or indirectly. We see cancer in our pop culture -- whether on a TV show that's entirely about it, like "The Big C," or one that uses it as a crucial narrative detail, like "Breaking Bad." We see real-life celebrities battle their diseases, from Farrah Fawcett to Christopher Hitchens to Michael Douglas. And we're bathed in cancer advocacy at every turn, like NFL players donning pink for breast cancer prevention or celebrities telling us to "Stand Up 2 Cancer."

As inspiring as these examples and efforts to portray and fight cancer have been, none give us an understanding of why cancer matters. In my mind, none of them appreciate cancer -- not in a positive sense, but in a way that ingrains the significance and severity of just what patients, doctors and our entire society are up against. We need something far deeper than pink ribbons or TV shows can provide.

It was with that in mind that I recently sat down with Dr. Siddhartha Mukherjee, an oncologist at Columbia University. His book, "The Emperor of All Maladies," is a "biography" of cancer that brings to light its cultural, mythical, clinical, social and political history. The book was a critical hit when it came out in late 2010 and continues to find an audience eager for its sweeping insight into such a baffling illness.

Mukherjee and I met on the campus of Stanford University, where he studied philosophy as an undergraduate, earning a Rhodes scholarship along the way, before moving toward medicine. During the course of our conversation, we discussed, among other things, the pros and mostly cons of declaring a "War on Cancer," and the essential but imperfect relationship between cancer doctors and cancer advocates. But we began with why he collects etchings of crabs.

Tell me why you put a picture of a crab on the book's cover.

The word "cancer" comes from Hippocrates' use of the word. Hippocrates imagined cancer as a crab buried under the skin and the blood vessels of the tumor like the legs of the crab surrounding it. For me, it was a very evocative image. I doubt Hippocrates literally felt that cancer was a crab under the skin but right from the beginning there was something metaphorical about how this family of diseases was imagined and that is an important theme in the book. How does one ever imagine illness? And what role does that imagination play in our logical, scientific, political and cultural lives?

This crab is a 19th century etching. But the book has now been translated into over 20 languages, and every translation has a different etching of a crab. Most of them are from my personal collection while there are others I've borrowed.

Is there now a better modern metaphor for cancer?

Now we would use the cell as a metaphor because, perhaps more than any other disease, cancer is an illness fundamentally of the cell. If you flip to the back of the book, there's an etching from the same period of time, one of the first etchings of a human cell. Part of this journey in the book is literally encompassed by the two ends of the book -- the crab on the front, the cell on the back and the journey from how we got from a metaphorical description of cancer to a cellular description of cancer.

We declared a war on cancer in the 1970s. What were the scientific and cultural implications of that?

The historical antecedent to the war on cancer is the campaign against polio and the March of Dimes and the Manhattan Project and Apollo Project. All of these antecedents led to this idea that if you pushed resources into cancer, a cure would come. It's important to note that during the 1970s, there's a singular war against a singular disease with a singular cure. That's where the war metaphor comes from.

This becomes problematic for many people. For scientists the idea of war creates the impression that there's a defined enemy -- we know who he is and there is a single strategy about what to do with that enemy. For patients, the idea that this is a war makes them foot soldiers in that war. To not survive is to become a loser, a casualty. Most patients don't want to be soldiers and casualties or losers. War inevitably sets up the rhetoric that you either win or lose.

When expectations are raised to this level, the fall is just as steep. That's what happened here -- we set the goal to cure cancer in a decade. That was in 1971. Sol Spiegelman, a cancer scientist at Columbia University, said declaring war on cancer was analogous to trying to land a rocket on the moon without knowing Newton's laws. This a time when we didn't even know what abnormal mechanism was driving cancer cells. So there was a great prematurity in this war. That was the astonishing hubris in the 1970s.

As a doctor, I was particularly interested in the tension you describe between patient advocates and the medical community. Can you talk about that?

We need patient advocates, they are crucial. That said, there are natural tensions. The role of patient advocates was crucial for creating the trials for Herceptin for breast cancer. On the flip side, one has to remember the situation with bone marrow transplant for breast cancer -- patients became so convinced that this was right that they would push for it without trials. In Massachusetts, a law mandated insurers pay for bone marrow transplant for breast cancer patients because there was a fear that they would skimp and not pay. Once that dam broke, clinical trials became impossible to perform because that was the only option patients and their doctors wanted. When the trials were finally done, after enormous resistance from every side, the results were negative.

Take a more recent example -- mammogram guidelines. Mammography has become a minefield. The data are clear, that between ages 40 and 50 mammograms have a limited role. That's not to say they have no role, but the technology is operating at its limits. Plus the incidence of the disease is low, so therefore, so is the chance of positive detection and saving lives. We could spend hours and hours debating between advocates and authorities, but in the end the data is not going to change until you either improve the technology or you stratify patients better so that you figure out who is at higher risk and then have those women get tested. The answer, again, is technology or science.

Why is it hard to get that message to patient advocates?

Patient advocates are very sophisticated in their understanding of data, at least the ones I've met. It's just a clash between their hopes and desires to be treated for these diseases and the reality of what's achievable and what's not achievable. The fault lies with scientists because of how many communicate the data. Ultimately, the National Cancer Institute needs to make a recommendation -- it can't sit on the gray zone. But the data live in a gray zone. It's an extremely difficult dilemma, and it becomes an emotional issue. We can debate this endlessly, but we need to reawaken the kind of passion that leads to better science, better technology and better knowledge we can use to stratify people based on risk. That's the way out of this.

Do you think to some extent our culture has to change its expectations of what's possible in medicine?

Culturally, medicine is now caught in two kinds of metaphors: that it is corrupt and powerless; the other kind is that it is invincible and all knowing. It's the witch and savior on each hand. There's a confusion about it. Doctors are human, and they operate under uncertainty. You might imagine that medicine is a discipline of making decisions under uncertainty. And this is hard to articulate to patients.

I often say, at least to myself, that what builds confidence in patients is when you tell them you don't know something. There's an irony in this, and you have to be there first and build a relationship before you do this -- but having established a therapeutic relationship and tell them what is known and what is not known. That actually allows you to form a bond.