P.J. Crowley says "it is hard to distinguish what WikiLeaks did from what the New York Times did" 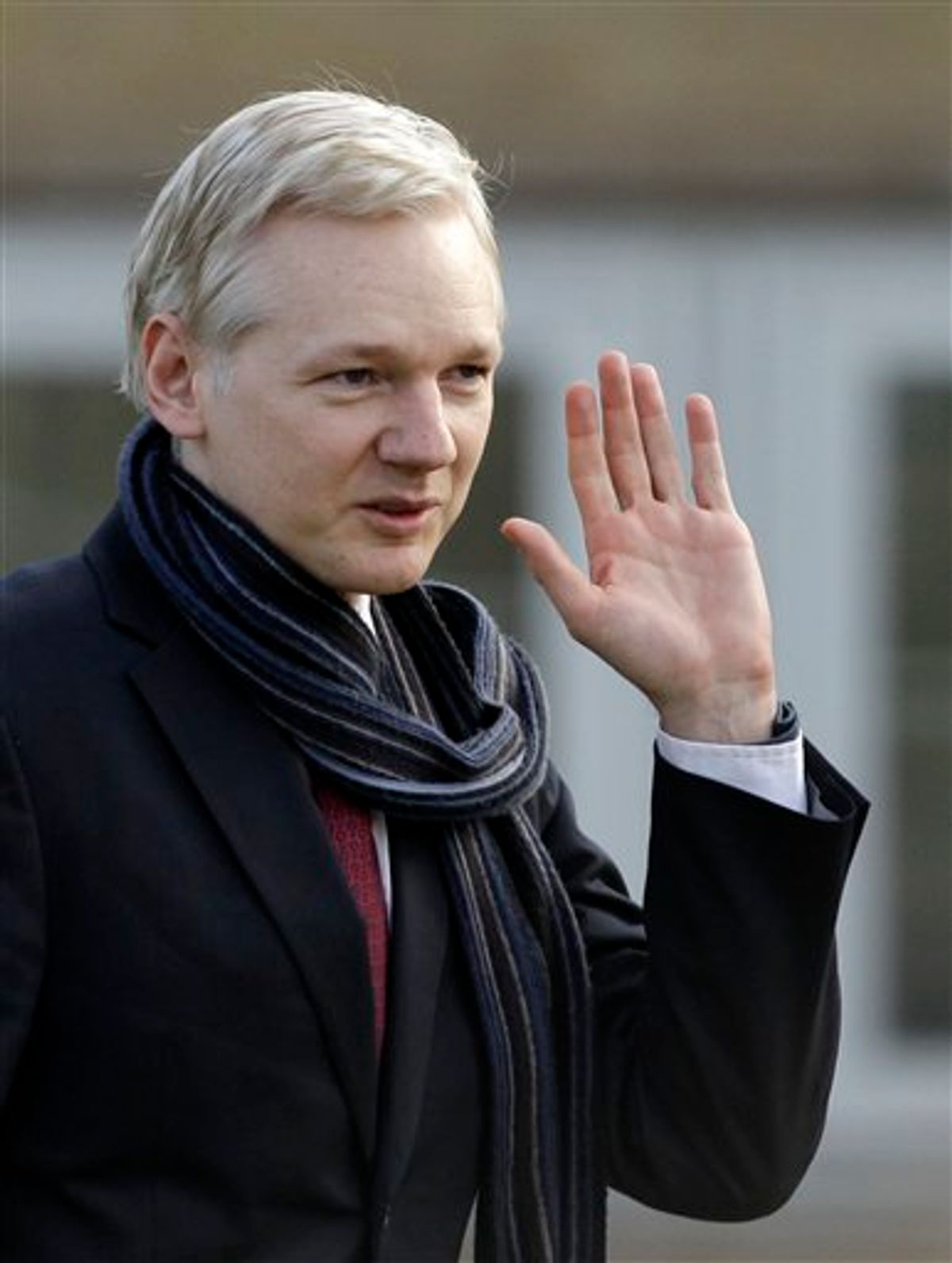 The founder of WikiLeaks Julian Assange waves as he leaves after speaking to the media after his extradition hearing at Belmarsh Magistrates' Court in London, Thursday, Feb. 24, 2011. Julian Assange can be extradited to Sweden in a sex crimes inquiry, a British judge ruled Thursday, rejecting claims by the WikiLeaks founder that he would not face a fair trial there. Assange's lawyer said he would appeal. Judge Howard Riddle said the allegations of rape and sexual molestation by two women against Assange meet the definition of extraditable offenses and said the Swedish warrant had been properly issued and was valid. (AP Photo/Matt Dunham) (AP)
--

(UPDATED) A former State Department official is casting doubt on the idea of prosecuting WikiLeaks, even as the Justice Department is still apparently mulling criminal charges against the group.

Former State Department spokesman P.J. Crowley tells me via email that "it is hard to distinguish what WikiLeaks did from what the New York Times did."

While that's a familiar argument among WikiLeaks supporters, it's striking to hear it from a former administration official. Crowley left his post last month after criticizing the Pentagon's treatment of Bradley Manning, who is accused of leaking classified documents to WikiLeaks.

After WikiLeaks began publishing leaked State Department diplomatic cables last year, top administration officials including Attorney General Eric Holder said in a number of high-profile leaks and public statements that the group was under criminal investigation. There was even an unconfirmed report from one of WikiLeaks founder Julian Assange's attorneys that a grand jury was meeting in Virgina to investigate the organization.

Since the WikiLeaks story has receded in the news, the tough talk from the administration has mostly faded. The status of any ongoing probe is unclear. But the looming question of how the Justice Department would distinguish what WikiLeaks did -- publishing leaked documents -- from what its media partners like the Guardian and the New York Times did remains unanswered.

The Espionage Act of 1917 makes it illegal to retain classified national defense information if the government asks for it back. But if that rarely used law applies to WikiLeaks, it would also apply to every big news organization that publishes national security reportage, according to legal experts.

Crowley, for his part, has by no means become a full-throated WikiLeaks supporter. Over the weekend, he tweeted: "The Manning prosecution, done right (his pre-trial treatment included), and improved data security are the proper responses to Wikileaks."

I asked Crowley if that means he does not believe WikiLeaks itself should be prosecuted. He wrote in response:

"I do not see WikiLeaks as journalism. It is a source of information. That said, it is hard to distinguish what WikiLeaks did from what the New York Times did. That's why the focus is rightly on Bradley Manning."

I've asked the DOJ if the investigation of WikiLeaks is ongoing, and I will update this post if I hear back.

UPDATE: Justice Department spokeswoman Tracy Schmaler tells me she has no updates on any probe of WikiLeaks. "The investigation relating to disclosure of [documents] by WikiLeaks is ongoing," she says.