Veda is precocious and hateful; but is she also annoying and unbelievable? Read the recap, join the discussion 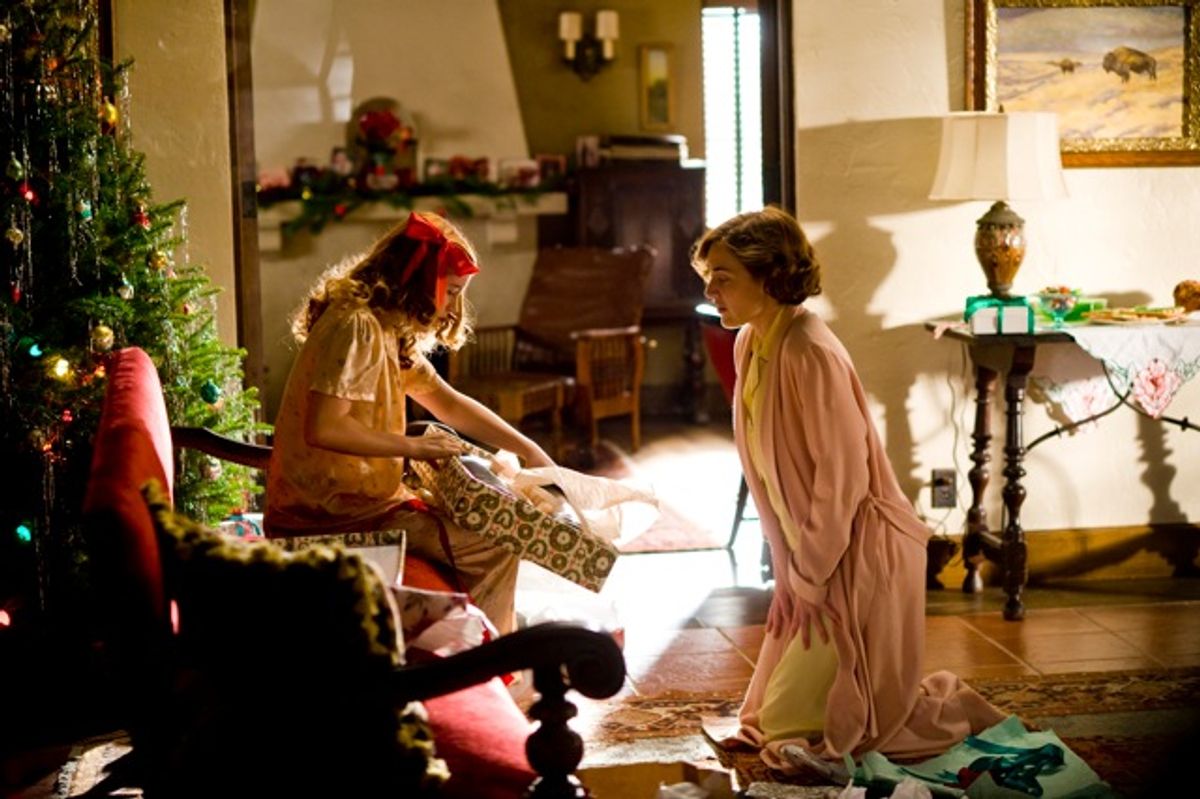 Mildred Pierce's daughter Veda has always been a brat. She was a brat in James M. Cain's original 1941 novel and in the 1945 film, and she's a brat in the new HBO miniseries, which aired its third episode last night.  But her sheer insufferability seems to be a make-or-break proposition with some of my friends, and with more than a few critics. I want the comments thread discussion in the second meeting of The Mildred Pierce Club to go wherever it feels like going, but I'm especially interested in your feelings about Veda.

But first, our ground rules:

1. Do not discuss plot events beyond the end of Episode 3, which aired last night.

2. It's fine to compare the miniseries to the movie or the novel as long as you don't run afoul of rule No. 1.

3. This article contains spoilers.  Deal with it.

Back to Veda: As played by Morgan Turner (and starting next week, Evan Rachel Wood) she's a musically talented and beyond-precocious child, and very much the dark mirror of her mother's ambition -- a little monster of entitlement who takes without giving.

I ascribe at least part of her awfulness to the gender politics of parents and children. Little girls have been known to dote on and even idealize their dads while piling all sorts of negative feelings onto their mothers,. That definitely happened in the Pierce household, with Veda treating her father, Bert (Brendan F. O'Byrne), as a flesh-and-blood saint and her mother as scum.

These dynamics are made even more acute by a couple of traumas: Mildred and Bert's divorce (which took Bert away from Veda, except on visitation days) and the death of Veda's younger sister, Moire ("Ray"), which occurred when Mildred was off doing the horizontal mambo with her new lover, the playboy mooch Monte Beragon (Guy Pearce). Last night's episode, which opened in the aftermath of the youngest child's death, contained an agonizing moment where Ray saw her parents in the kitchen and immediately embraced her father, ignoring her mother until she finally looked up at her and demanded, "Where were you?"

As more than one commenter pointed out in last week's recap, Ray died from sudden and catastrophic illness. Mildred's absence from the house had no effect on that one way or the other. Veda's implied accusation (and other relatives' pointed anger at Mildred last week) amounted to a generalized statement of disapproval and resentment, aimed at a middle-class 1930s woman who was breaking all sorts of taboos (getting a job, starting her own business, taking a new lover soon after a divorce) while still raising kids. The scene in this week's episode in which Veda tongue-lashes her mother after failing to receive a piano for Christmas brought all those resentments out. As Veda admitted, her more cutting remarks came straight from Monte, with whom she'd bonded. In that really twisted scene (which set the stage for Mildred's breakup from Monte) Veda was hurting Mildred in two ways: showing her that Monte had an easy confidence with Veda that he didn't have with her mom, and using Monte's own words to poison and destroy the relationship (by letting Mildred know what Monte really thought of her).

I wonder, do you find Vera believable? And if you don't find her believable, is the problem the character herself (which comes from James M. Cain's source novel) or Morgan Turner's performance?

As my colleague Alan Sepinwall, who is not a fan of the miniseries, says:

Parental love can blind you to your kid's faults for a while, but not for year after year, not after everything Veda says and does over the course of the story. And as played by Winslet, Mildred is very far from a sap. She's a tough cookie, savvy negotiator and survivalist - the material about her rise from desperate waitress to thriving restaurateur is the miniseries' highlight - and she doesn't even play her as if she has a blind spot for her eldest daughter. There's scene after scene of Mildred looking like she knows just how toxic Veda is, yet the demands of the story require her to again and again make decisions that fly against what we can see on Winslet's face. It's supposed to be a tale of maternal obsession, but instead 90% of the miniseries features a wise character who randomly becomes self-destructively in thrall to her emotional vampire of a daughter for the other 10%.

As for the mother-daughter pathology, perhaps TV shrink Dr. Drew can tackle that some day. It is hard to care when each of them is so annoying in her way. It may be worth noting that in his oeuvre, Cain tended to paint women as evil temptresses or control freaks. Who's to say that "Mildred Pierce" is not just an idiosyncratic working out of some bee in Cain's personal psychic bonnet, say, because a controlling mother stomped on his own operatic ambitions by telling him he had no talent.

I think Turner is tremendous in a part that is, for a variety of reasons, exceptionally hard to play, especially for a young girl, and putting it over (and doing a credible job in the piano-playing scenes to boot!). Veda is a bad apple and we're supposed to find her off-putting, even toxic -- a prematurely hostile and bitter person who's going out of her way to undermine and destroy her mother. There are moments when the two seem authentically, if  unnervingly, bonded -- as in the scene after Veda's first lesson with the maestro; the tearful Veda expresses relief that the hateful old man has decided to take her as a student, and Mildred seems relieved that Veda is relieved.  But such moments are few and far between. I find the generally tense, ugly feeling in the Veda-Mildred scenes credible, if unpleasant.

People don't like to talk about this, but sometimes parents and children despise each other for reasons that aren't really anyone's fault; and sometimes a child, for reasons of temperament or brain chemistry or a combination of nature and nurture factors, is just a straight-up incorrigible brat. It's bad luck. Whatever errors Mildred might have made as a parent, I think that's the case here, and it's part of her tragedy.

But your mileage may vary.