A hole opened in one of its planes, forcing an emergency landing. How serious was it? 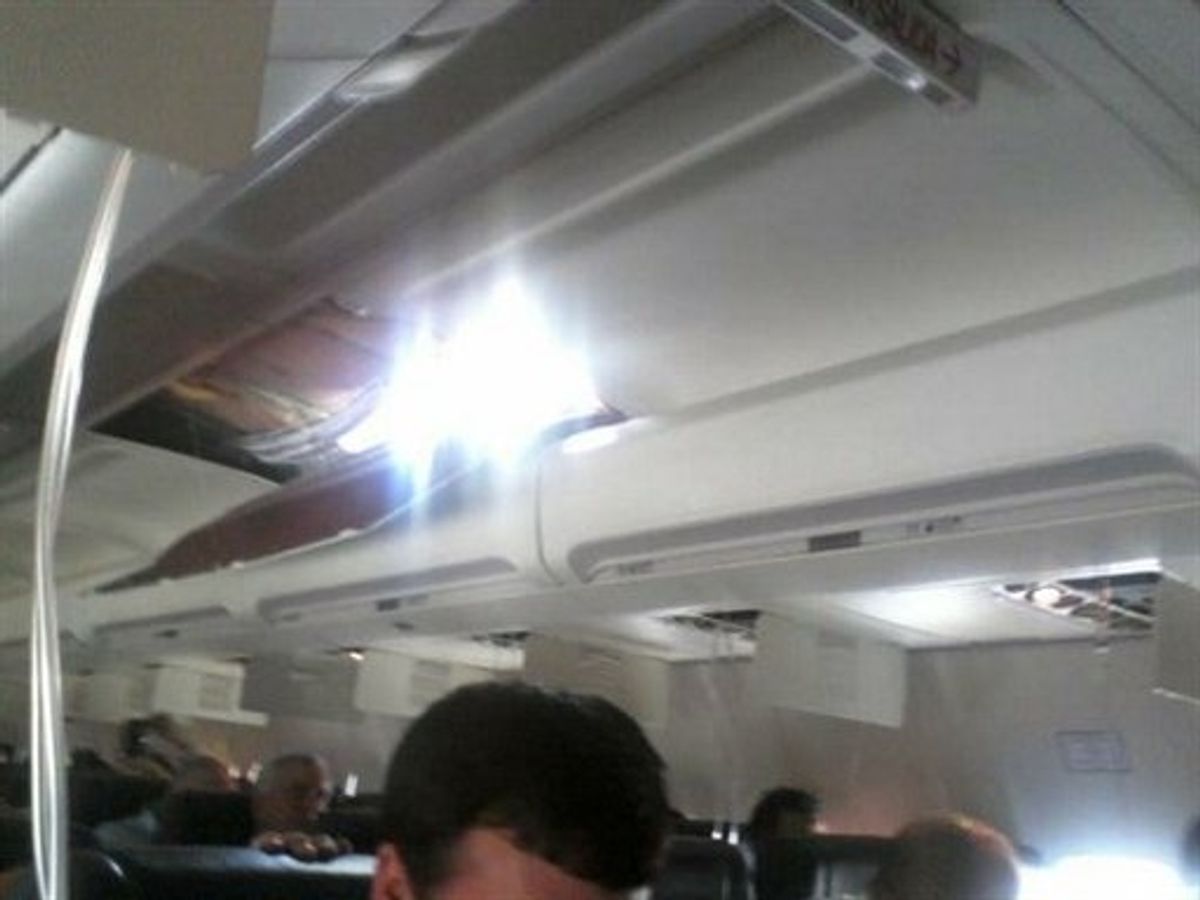 In this photo provided by passenger Joshua Hardwicke, shows a cell phone image of an apparent hole in the cabin on a Southwest Airlines aircraft Friday, April 1, 2011 as it makes an emergency decent into Yuma, Ariz. Authorities say the flight from Phoenix to Sacramento, Calif., was diverted to Yuma due to rapid decompression in the plane. FAA spokesman Ian Gregor says the cause of the decompression isn't immediately known. But passengers aboard the plane say there was a hole in the cabin and that forced an emergency landing. (AP photo/Joshua Hardwicke) NO SALES (AP)
--

On Friday, a 5-foot-long hole opened in the upper fuselage of a Southwest Airlines 737 carrying 123 people, causing a rapid depressurization and panic among passengers -- those who weren't tweeting and taking photos of the breach. The crew made a safe emergency landing at a military base in Yuma, Ariz. The media and blogosphere took it from there.

News coverage of airplane mishaps has always been sensationalist. Now, passengers themselves have become part of the problem. Anybody with a mobile phone camera and an Internet connection is able to turn a minor event into a sort of digital disaster movie. We're reminded of the 2005 Alaska Airlines incident, when an amateur blogger's luridly overblown account of a decompression landed him in the New York Times and on "Good Morning America."

And why has the Southwest story garnered so much attention, while a very similar incident involving an American Airlines 757 last October went by with hardly a ripple?

Events like this deserve coverage, and deserve our attention, absolutely. But to what extent, is the question. Too much saturation, and the public no longer knows the difference between a relatively insignificant malfunction and a genuine near-catastrophe.

No bones about it, a hole in an airplane is always serious. The dangers include explosive decompression, and in a worst-case scenario what begins as a small crack or fracture can propagate to the point of large-scale structural failure. But that's not what happened to Southwest. The loss of pressurization was rapid, but not explosive. There was no "explosion" that "rocked the cabin," as one Associated Press story recklessly put it. Neither was the landing "harrowing." There were no control issues, and no further compromise of the fuselage. The landing was all but routine.

(The AP is also guilty of that old pet peeve of mine, describing how "the pilot" guided the jet to a landing. Once again we're led to believe there is only one actual pilot in the cockpit, when, of course, there are always at least two, either of whom is fully qualified to operate the aircraft.)

Ultimately, from the crew's point of view, this was a pressurization issue. Passengers are prone to panic when the oxygen masks come dangling out of their compartments, but dealing with a decompression is relatively straightforward. Pilots will don their cockpit oxygen masks and commence a rapid descent to an altitude no higher than 10,000 feet. Even with a total pressure loss there are several minutes of supplemental oxygen available for both passengers and crew, but the protocol is always to get down as quickly as possible. It can be startling, but a high-speed emergency descent is well within the capabilities of any aircraft and not, by itself, unsafe.

(For more on decompressions, including my account of my once experiencing two of them on the same day, see here.)

Southwest has withdrawn 79 of its older-generation 737s from service. The jets will undergo checks for fatigue-related stress.

As to where the hole came from, it was possibly the result of an undetected crack brought on by many thousands of short-haul flights over the life of the airframe. It's not the force of the landings that stress the fuselage so much as the pressurization cycles. Imagine a balloon being constantly inflated and deflated to the point where its skin becomes weak. Granted, airplanes are built with these stresses in mind, and undergo careful fatigue inspections, but every so often a crack goes undetected.

At least two fatal accidents can be tied, in part, to high-cycle airframe stress. In 1985, a Japan Airlines 747 crashed near Mount Fuji killing 520 people -- the worst single-plane disaster in history. The airplane was a short-range, high-capacity variant of the 747 and had spent its career flying Japanese domestic routes. Shortly after takeoff from Tokyo's Haneda airport, an aft pressure bulkhead ruptured. Air rushing into the tail structure caused destruction of a portion of the vertical stabilizer and rudder, rendering the jet uncontrollable. The bulkhead had undergone a faulty repair seven years earlier after a hard landing, but was further weakened by thousands of short-haul flights that had been logged since then. (A JAL maintenance supervisor later committed suicide, while the president of the airline resigned, accepting full responsibility for the crash and visiting victims' families to apologize.)

And in 1988, cracking along lap joints in the outer skin of an Aloha Airlines 737 caused an 18-foot section of the forward cabin to peel away during flight, resulting in the death of a flight attendant and one of the most heart-stopping emergency landings of all time.  The aircraft had been in service for 19 years, completing tens of thousands of inter-island flights. Repeated pressurization cycles, possibly exacerbated by long-term exposure to corrosive salt in Hawaii's sea breezes, allowed the crack to propagate.

Since then, airline maintenance procedures have been revised to better monitor structural fatigue. Boeing and the Federal Aviation Administration developed a careful schedule of inspections dependent on both total airframe hours and the number of takeoffs and landings.

Even Southwest's oldest 737s are newer on average than the model involved in the Aloha mishap, but Southwest too specializes in shorter-haul flights -- lots of them. All airlines strive to keep their planes in the air as much as possible, but Southwest does this while also maximizing cycles. It has one of the highest aircraft utilization rates in the industry, scheduling as little as 30 minutes between legs.

In 2008 the FAA levied a $10.2 million fine against Southwest for failing to adequately follow the inspection guidelines put in place after Aloha. The infraction involved 46 737s used on nearly 60,000 revenue flights between 2006 and 2007. Even after the lapse was discovered, Southwest allowed several of the jets to continue flying -- six of them with known fatigue cracks. Southwest said it believed it was in compliance with FAA's guidelines, and that the inspection lapses were unintentional. Of the cracks that were discovered, they were deemed minor enough that repairs could be made later. It is doubtful that any of the aircraft were in dangerous condition, just as it is doubtful that this weekend's incident can be tied to the 2008 scandal. Still, Southwest's fleet runs a higher risk than most for fatigue problems, and it needs to be especially vigilant.

Readers had mixed feelings about last week's column on high-speed rail connections at airports overseas -- and the depressing dearth of them here at home. I was chided for failing to admit that decent public transport options do exist at several U.S. airports.

That's a fair critique. In retrospect, I ought to have devoted a paragraph or two highlighting some of our better rail connections. Not all are as cumbersome as those at JFK and Boston-Logan. Two that jump to mind are those at Portland, Ore., and Washington-Reagan. Atlanta, too, has a convenient metro connection with in-terminal access.

Also, I incorrectly listed Seoul's Incheon airport as one of the Asian airports lacking high-speed rail service to the city. A line was completed late last year and is now operational.