The battle for Wisconsin gets a high-stakes reality check 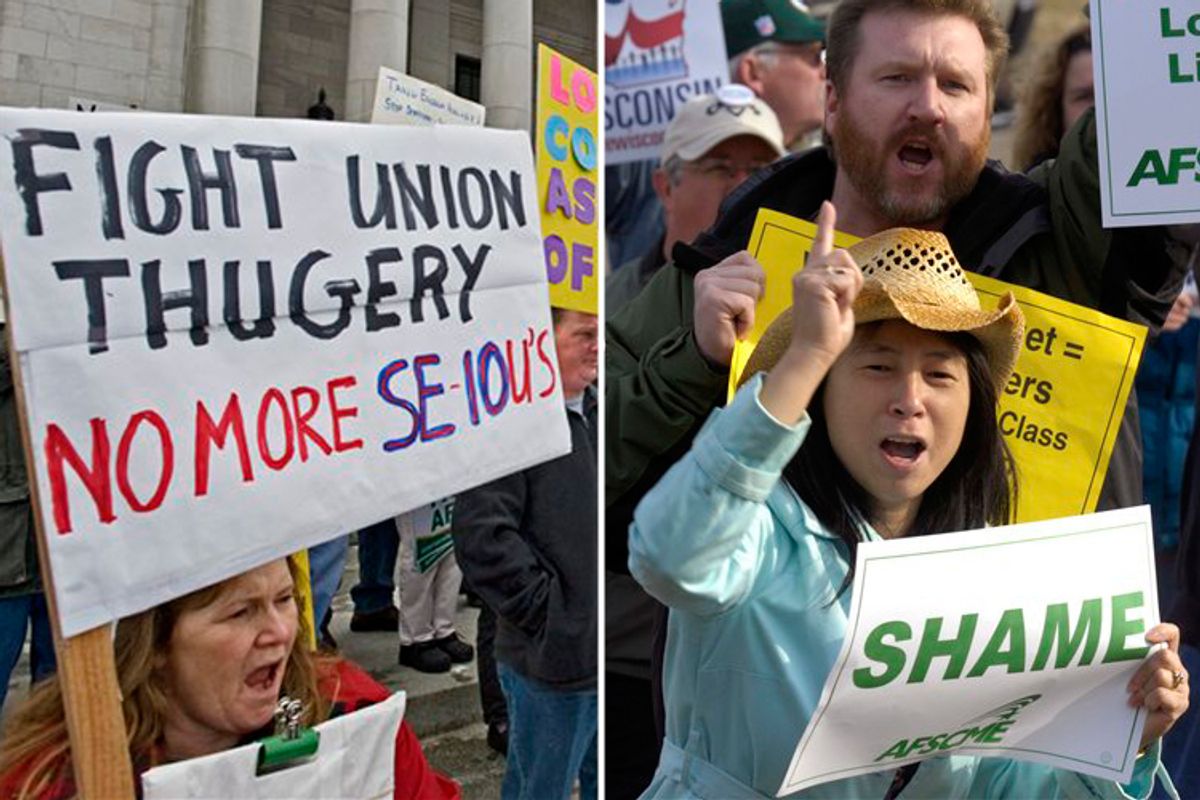 Never mind President Obama's announcement that he is running for president in 2012, or the mad scramble to avoid a government shutdown on Friday, or even House Budget Committee Chairman Paul Ryan's ambitious new plan to privatize Medicare, gut Medicaid, and keep in place tax cuts for the rich. Politically speaking, a good case can be made that a state Supreme Court election in Wisconsin on Tuesday will be the most important news development of the week -- or month, or year (at least so far).

David Prosser, an incumbent conservative characterized by his critics as a close ally of Republican Gov. Scott Walker, is running for reelection against a longtime environmental litigator, Joanne Kloppenburg. The practical importance of this election is obvious: The state Supreme Court will decide the legality of the Walker agenda -- including, but not limited to, his law stripping public sector workers of their collective bargaining rights. A Kloppenburg victory would shift the majority of the court from solidly conservative to potentially liberal (there is one justice who is considered a swing vote).

But whether or not a change in the composition of the court would actually change how the justices might rule on politically controversial legislation only captures a small portion of the drama inherent in this election. The symbolic importance is far more important. The entire politically wired world will be watching this election for a hint as to where the nation is headed.

The Tea Party Express warned in a Sunday fundraising email that "If radical liberal Joanne Kloppenburg wins, then Barack Obama and his union thug allies will have won." On the other hand, it asserted "If conservative Justice David Prosser wins, then Gov. Scott Walker and the tea party movement will have won in Wisconsin. The stakes could not be higher."

Inflammatory "union thug" rhetoric aside, the Tea Party is right. In terms of morale and momentum, "the stakes could not be higher." The new post-midterm election Republican agenda is set for its first test at the ballot box. The total number of votes cast may be small, but the impact could be huge. Whoever wins will receive a jolt of energy, and potentially influence the national conversation. If Kloppenburg triumphs, the possibility of a successful recall of Republican state senators becomes much more likely, a development that would dramatically change the balance of power in Wisconsin, and might signal a potential national backlash against Republican "overreach" in 2012. But if Prosser holds his seat, the Tea Party can rightfully claim to have resisted a major challenge to its newfound political influence. Conservative Republicans in the U.S. Congress and statehouses across the country will take heart -- a fact that could easily influence budget negotiations and even the presidential race.

There is some anecdotal evidence that Wisconsin liberals are currently more motivated than conservatives. Democrats were the first to gather enough signatures to officially set in motion a recall vote for a Republican state senator, even though Republicans started earlier in their recall efforts for the Democrat senators who fled the state in response to Walker's budget repair bill. If Tuesday's results confirm that indicator, you can bet that Wisconsin Republican legislators are going to feel mighty nervous.

There's a lot going on in the world right now that demands the president's attention -- Libya, the economy, the budget negotiations, the rising price of gas and, of course, his own reelection bid. But on Tuesday night, I'm betting that at least one eye will be focused on Wisconsin's Supreme Court election. The people get another chance to speak -- what will they say?

2012 Elections How The World Works The Labor Movement Wisconsin