Odds of a government shutdown surge 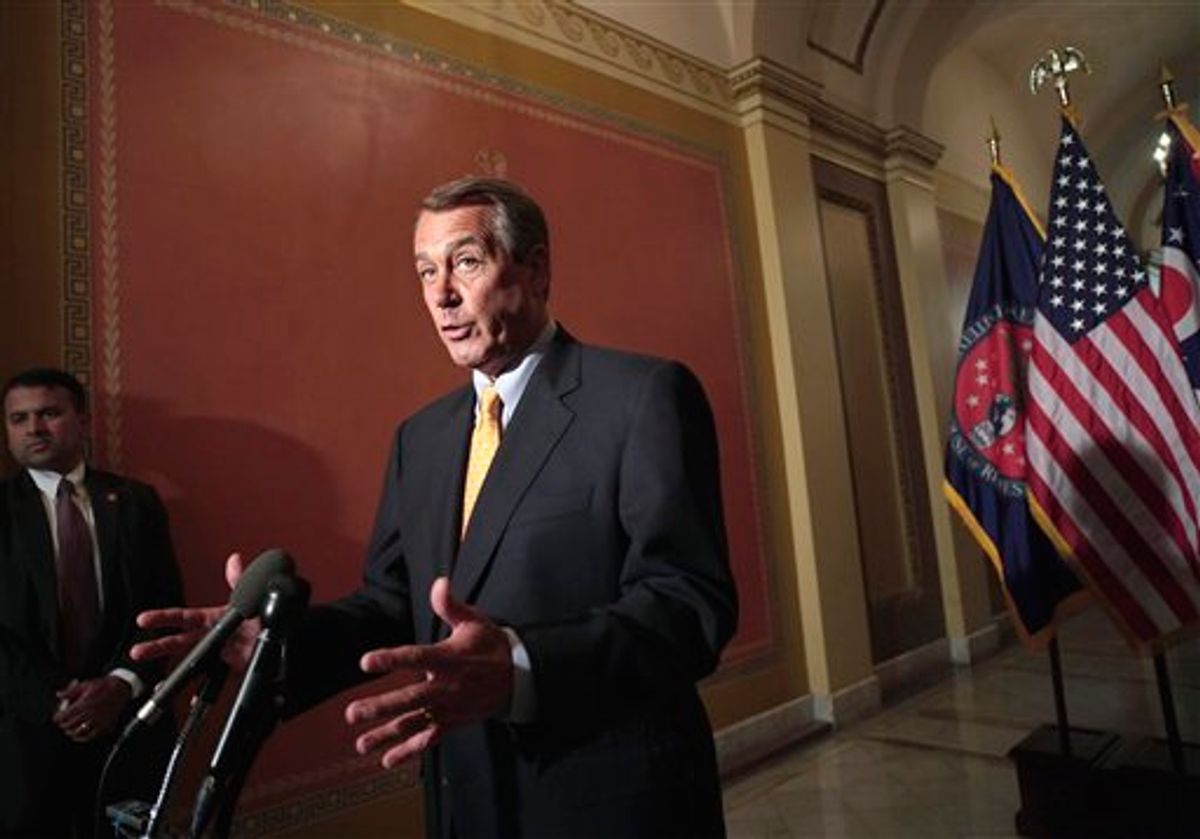 FILE - In this April 1, 2011, file photo House Speaker John Boehner of Ohio pauses during a news conference on Capitol Hill in Washington to discuss GOP efforts to create jobs and cut spending. The dilemma facing Boehner to pass a fast-approaching spending compromise and avert a government shutdown is to get the overwhelming majority of votes to come from fellow Republicans, even if dozens of easily attainable Democratic votes could help carry the budget bill to victory. (AP Photo/J. Scott Applewhite, File) (AP)
--

President Barack Obama, showing growing impatience, said Tuesday it would be "inexcusable" for lawmakers to fail to fund the government through the end of the year in order to avoid a shutdown.

"We are closer than we have ever been to an agreement. There is no reason why we should not get an agreement," Obama said following a White House meeting with congressional leaders.

Appearing before reporters at the White House, Obama said that House Speaker John Boehner and Senate Majority Leader Harry Reid were to meet on Capitol Hill later Tuesday to continue negotiations. If that meeting does not produce an agreement, Obama said he would summon the pair back to the White House Wednesday.

"Myself, Joe Biden, my team -- we are prepared to meet for as long as possible to get this resolved," Obama said.

In a statement following the private White House meeting earlier Tuesday, Boehner had said there was no deal. And he warned that House Republicans "will not be put in a box" of accepting options they refuse to endorse.

Boehner has proposed an agreement that would keep the government running for one more week and slash another $12 billion in spending. Boehner has already orchestrated action by Congress to pass a pair of stopgap bills, so far cutting $10 billion from an estimated $1.2 trillion budget to fund the day-to-day operations of government through Sept. 30.

Obama said he would only accept another short-term funding extension, of two or three days, in order to get a longer-term deal through Congress. But he ruled out a longer extension to allow negotiations to continue. "What we are not going to do is once again put off something that should have been done months ago," the president said.

Friday is the deadline to avoid a shutdown. Boehner's account of the meeting between Obama and top lawmakers of both parties, released in a statement from his office, did nothing to suggest the White House and Congress were closer to reaching a deal.

Boehner again insisted the parties have not even agreed on a target for spending cuts The White House disputes that.

As the meeting was taking place, White House press secretary Jay Carney had expressed confidence that a deal could still be reached this week as long all sides were reasonable. Yet some public frustration also seeped into the White House's words.

"The fact is that the president is calling this meeting in part because Congress can't get its work done," Carney said as Obama met with Boehner, Senate Majority Leader Harry Reid and the top House appropriators from both parties.

The White House has begun advising government agencies on the proper steps in preparation for a shutdown of the government.

Boehner has already orchestrated action by Congress to pass a pair of stopgap bills, so far cutting $10 billion from an estimated $1.2 trillion budget to fund the day-to-day operations of government through Sept. 30. Yet broader negotiations have stalled on legislation blending immediate spending cuts with the money required to run federal agencies through the end of September.

Democrats are accusing the GOP of pressing harmful spending cuts and attaching a social policy agenda to the must-pass spending bill. Boehner counters that the White House is pressing gimmicky budget cuts.

While the White House has been heavily involved in the budget discussions, it has tried to maintain a public distance from the talks, with Obama and aides repeatedly arguing that the spending measure is an appropriations function of Congress, not of the executive branch.

Boehner's latest short-term bill includes $12 billion in immediate spending cuts and enough money to operate the Pentagon through the end of September. While Carney was careful not to say whether the White House would oppose Boehner's specific proposal, he said the administration believes any short-term spending bill would be detrimental to the economy.

The White House maintains that lawmakers from both parties have been working off a target number -- $33 billion more in cuts -- for days. But Boehner has publicly denied any such agreement, saying in his statement that the $33 billion "is not enough." He said House Republicans won't be boxed into accepting either a shutdown or a legislative deal that fails to make enough spending cuts.

Republicans on Monday disclosed plans to instruct lawmakers "on how the House would operate in the event Senate Democrats shut down the government."

And in a memo to agency officials, the deputy director of the Office of Management and Budget, Jeffrey Zients, urged agency heads to refine and update contingency plans in the event negotiators don't strike a deal by Friday's deadline.

Boehner's one-week plan could reassure tea party-backed lawmakers who are among the most vocal in seeking to reduce the size and scope of the government. It could also put pressure on Democrats and the White House to offer greater spending cuts.

On a separate long-term track, Republicans controlling the House have fashioned plans to slash the budget deficit by more than $5 trillion over the upcoming decade, combining unprecedented spending cuts with a fundamental restructuring of taxpayer-financed health care for the elderly and the poor.

Ryan's program also includes a controversial proposal to convert the traditional Medicare program for the aged into a system by which private insurers would operate plans approved by the federal government.

Current Medicare beneficiaries or workers age 55 and older would stay in the existing system.

At the same time, Republicans propose to sharply cut projected spending on the Medicaid state-federal health program for the poor and disabled and transform it into a block grant program that gives governors far less money than under current estimates, but considerably more flexibility.