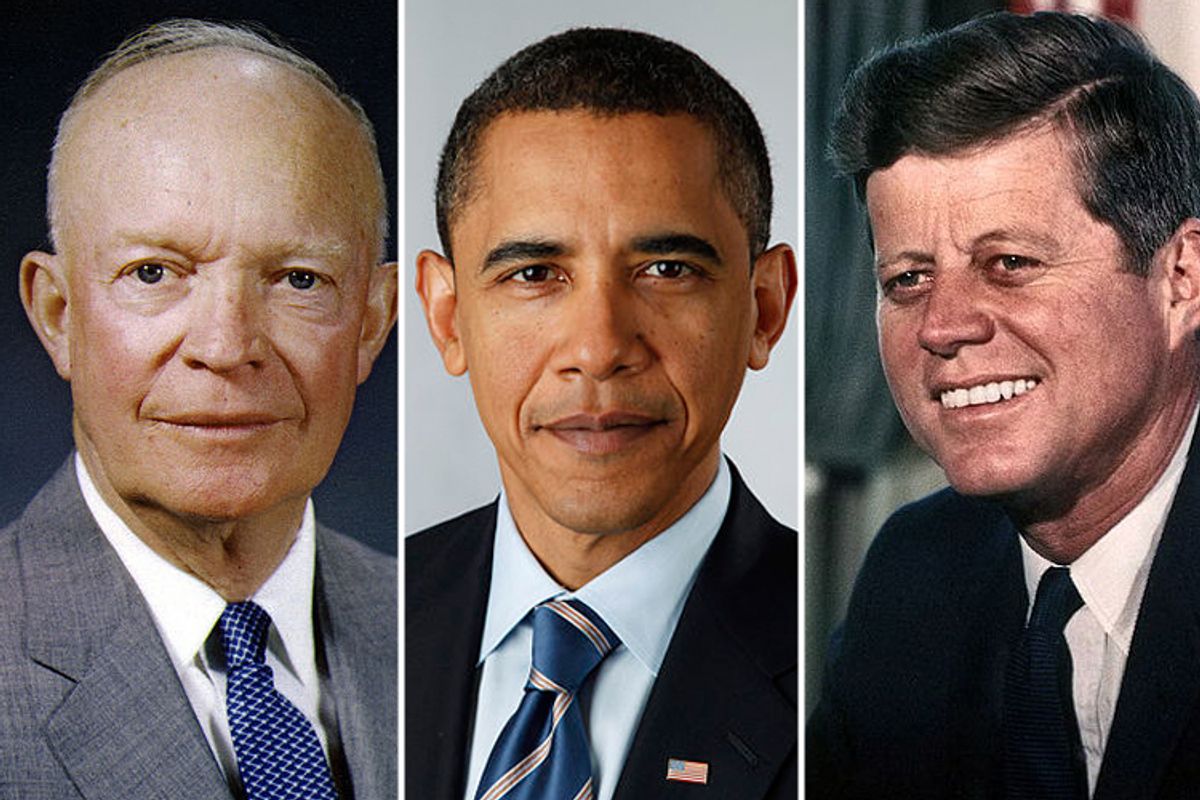 When Barack Obama was elected in 2008, it was clear what the nation needed: a return to robust New Deal-style programs in domestic policy to help Americans with stagnant wages and shrinking benefits, and a reduction of U.S. defense spending and commitments abroad. To put it another way, the times required a synthesis of John F. Kennedy’s New Frontier in domestic policy and Dwight Eisenhower’s New Look in foreign policy. Unfortunately, President Obama has provided the exact opposite, combining the domestic policy of Eisenhower with the foreign policy of Kennedy.

While the conditions for reform on the scale of Franklin Roosevelt’s New Deal or Lyndon Johnson’s Great Society probably did not exist in 2008, something like Kennedy’s New Frontier was possible. Although it is overshadowed in historical memory by the Great Society, the New Frontier was responsible for significant reforms in the New Deal tradition. In addition to pushing civil rights reform and dedicating the U.S. to manned lunar landings by the end of the decade, Kennedy fought the recession he inherited by classic Keynesian policies, including an increase in post office construction and accelerated highway spending and the tax cut he proposed in 1963. By 1964, the economy was booming. Also in the New Deal tradition were Kennedy’s long-term reforms sought to expand universal social insurance. Under his leadership Congress expanded unemployment benefits and Social Security, lowering the retirement age for men to 62.

Unfortunately, Kennedy’s foreign policy was marked by hubris and over-extension. He announced in his 1961 inaugural address that "we shall pay any price, bear any burden, meet any hardship, support any friend, oppose any foe to assure the survival and success of liberty." In addition to defining America's national interest in terms of an open-ended crusade, Kennedy favored the "flexible response" school, which held that the U.S. should be prepared to engage in limited wars like Korea and in counterinsurgency campaigns against Soviet- or Chinese-backed guerrillas. Whatever Kennedy might have done if he had lived, his logic led to deepening involvement in Vietnam as well as his failed attempt to back the attempt of Cuban exiles to depose Castro in the failed Bay of Pigs operation. Neoconservatism in foreign policy began with Democratic hawks in the Kennedy-Johnson tradition.

Eisenhower’s grand strategy looks better in hindsight. Eisenhower wrote in his diary in 1951 that the U.S. had to achieve "security without paying the price of national bankruptcy." His New Look strategy relied on the threat of massive retaliation (and, implicitly, on covert operations, as in Iran and Guatemala) in order to avoid committing troops to open-ended brush-fire wars. Ike brought the Korean War to an end and refused to intervene directly to help the French in Vietnam, telling his National Security Council in 1954: "This war in Indochina will absorb our troops by the divisions!" The hero of D-Day enraged his fellow soldiers by providing the Pentagon with far less money than it demanded.

But the parsimony that was a virtue in Eisenhower’s foreign policy was a vice in his domestic policy. The budget-balancing obsession of the Eisenhower administration was responsible for federal government surpluses in 1956 and 1957, which had a contractionary effect on the economy. Over the objections of his vice-president, Richard Nixon, Eisenhower sought prematurely to balance the budget before the recovery from the 1958 recession was complete, a mistake that contributed to Nixon’s defeat in the presidential election of 1960.

Whatever may have been the case in the 1950s and 1960s, the ideal president today would combine Kennedy’s New Deal approach to domestic policy with a global strategy like Eisenhower’s New Look that reduced defense spending and avoided military quagmires. By this standard, how does Obama measure up?

Alas, in domestic policy, Obama has been too much like Eisenhower and not enough like Kennedy. Following the political backlash against a stimulus that was far too small, Obama sought to reinvent himself as a fiscal conservative, announcing a freeze on all discretionary spending -- except for the military budget that Ike viewed with suspicion.

If Obama is too much like Ike in domestic policy, he is too little like the general in foreign policy. When he assumed office, many hoped that by the end of his first term Obama would wind down the U.S. war in Afghanistan, in the way that Eisenhower ended the Korean War. Instead, Obama expanded the war. Now there is no end in sight.

The Eisenhower administration was suspicious of counterinsurgency campaigns by American troops in unstable countries. The Obama administration has embraced the Pentagon’s fascination with COIN with the enthusiasm with which the Kennedy administration promoted the Green Berets.

In 1956 when the British, French and Israelis engaged in an unprovoked attack on Nasser’s Egypt in order to seize the Suez Canal, Eisenhower was furious. Under his leadership the U.S. joined the Soviet Union in pressuring the two former European imperial powers and Israel to withdraw. When the British and French engaged in an unprovoked intervention in the Libyan civil war, Obama joined in, adding Kennedyesque rhetoric: "To brush aside America’s responsibility as a leader and -- more profoundly -- our responsibilities to our fellow human beings under such circumstances would have been a betrayal of who we are."

Obama inherited two wars, expanded one, and has now added a third. How unlike Ike.

President Obama has indicated, to nobody’s surprise, that he will seek reelection. On what platform, one wonders -- the private insurance subsidy policy of Eisenhower and the nation-building crusades of Kennedy?