The right just doesn't get journalism

On Karl Rove's WikiLeaks-for-conservatives site, the goal isn't truth or accountability -- it's point-scoring 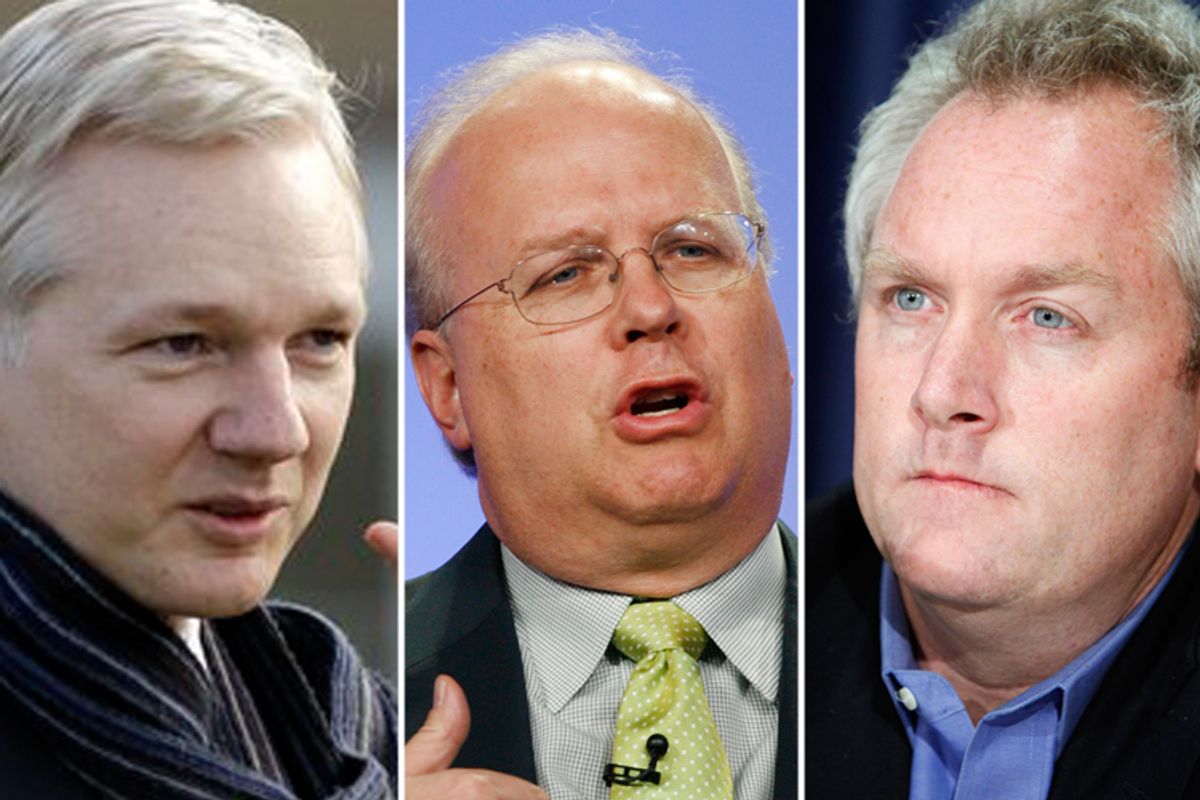 Oh, good, Karl Rove started his own WikiLeaks. A conservative WikiLeaks. This WikiLeaks is about "transparency" and exposing malfeasance by the Obama administration. It's also not about "leaks," at all: It is made up of documents obtained via FOIA requests, that citizen journalists (vetted by Rove's Crossroads GPS group, obviously) will sift through and analyze. It is called "Wikicountability."

And it's gonna bring down this corrupt administration with bombshells like these:

The site is clearly a work in progress: while it publishes new articles each day, they come from only a few contributors. It began with some documents that set the tone: a list of union leaders who were met in 2009 by the secretary of labor, Hilda Solis, and the production costs for an advertisement for Medicare featuring Andy Griffith ($404,000).

So many professional conservatives don't really understand how journalism works, when it works. They really only "get" its cousin, propaganda.

I am always in favor of more document dumps and FOIA requests and damning information about our government, but the obvious purpose of Wikicountability is to foment misleading talking points.

Well, actually, the point of Wikicountability is to allow Rove's nonprofit "educational" 501(c)(4) to maintain its nonprofit status by pretending to be doing something nonpolitical with 50 percent of the money they've raised from secret donors. And, yes, it is painfully ironic that a Rove's anonymously funded independent shadow-RNC is now launching a make-believe "transparency" campaign.

It's a half-baked idea that will either fizzle out entirely (filing FOIA requests is boring work, especially for non-professional journalists) or simply exist as yet another source of the memes and myths that make up the fever-swamp that is the alternate conservative media. If a Wikicountability piece ends up forming the basis of some overhyped pseudo-scandal that Megyn Kelly can sneer about for a week before dropping it entirely once it's outlived its usefulness, then: Mission Accomplished.

I'm not looking for noble goals from political hacks dabbling in journalism (or scare-quotes "journalism," no one is entirely sure of the difference anymore). But I do detect a fundamental difference between the way (most) liberals and (most) conservatives play the entire rigged game: For way too many conservative outlets, the attempt to figure out the truth about a situation takes a decided back seat to the real goal, which is "point-scoring."

This is epitomized, of course, by Andrew Breitbart, who publishes an astounding amount of poorly written garbage on his various sites while railing about the poor standards of the dreaded MSM. But even the "respectable" right-wing sites -- National Review, cough cough -- regularly publish patent nonsense about creeping sharia law and the New Black Panther Party.

The problem is that right-wingers -- especially campaign hacks like Rove and true believers like Breitbart -- have internalized the "liberal media" attack line. In their imaginings, simple bias has mutated into active malice. So when right-wingers form their own media, they use the model that they imagine the MSM works under. Advance your cause by any means necessary.

It is such a classic right-wing hack response to seeing the successes of a site like WikiLeaks to think to yourself, "What we need is a 'conservative version' of that that exists to manipulate FOIA documents into compelling attacks against Barack Obama.'"

And that name! Wikicountability. Finally, a Wiki devoted to ... counting things. A database of user-generated information about Count von Count. Restoring "icountability" to the White House. You get the idea.