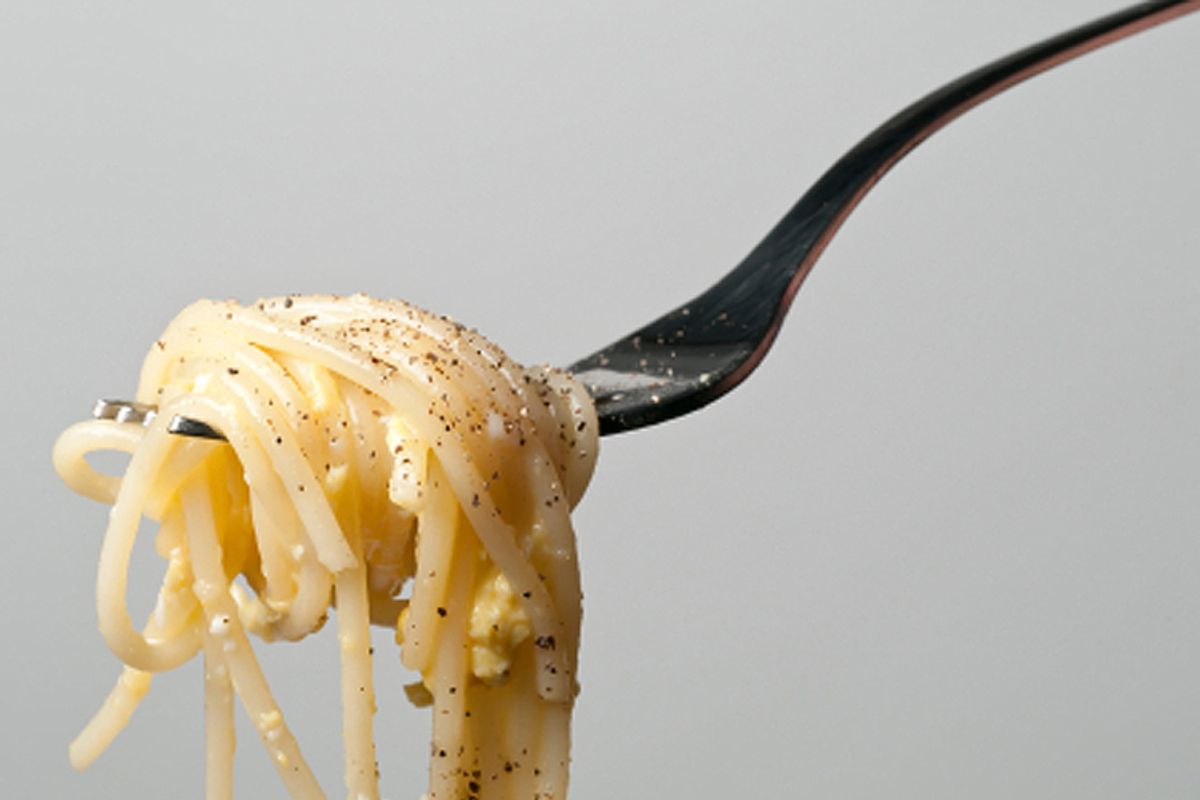 The food of Rome is the gustatory reflection of a city whose history encompasses the glory of an empire and the squalor of a tiny provincial backwater, the excesses of Caligula and the holiness of saints, the refinement of court cuisine and the simple, earthy cookery of pilgrims and the poor. It's almost shockingly powerful, almost primal, revolving around organ meats, garlic, black pepper, juniper berries, sausage, pork and cheese. Eating a Roman meal is like experiencing an earthquake or an orgasm or Mardi Gras.

In my mind, no dish better encapsulates the experience of Roman cuisine than Spaghetti alla Carbonara -- the Roman charcoal industry's gift to the world. As the story I've been told goes, the charcoal sellers lived in the towns in the hills of Lazio outside Rome, cutting wood and charring it before carrying it in sacks down to the city to sell. The work was almost unbearably physical, and demanded hearty food to keep up one's energy -- hence, the birth of this almost unbearably rich pasta dish.

How much of that is truth and how much the product of the Roman love for poetic fabrication I don't know, but whatever its history, it's my favorite meal on Earth, a marker of important events in the same way that others use champagne or cigars. When served, conversation around the table ceases, replaced by moans and grunting. It's a pleasure too good to ever be called guilty.

A note on ingredients: I call for pancetta, an air-cured Italian pork belly that's a cousin to bacon. I love its chewy sweet-saltiness, but most Romans would insist that you use guanciale, cured pork cheek, whose soft, buttery unctuousness produces a different texture and effect. Pancetta is widely available, usually presliced in thin sheet; I prefer to buy it from an artisan salumi producer that sells it in a cylindrical roll that allows me to cut it into small dice. Guanciale is less widely available. Both can be bought online from Boccalone, a San Francisco artisan salumeria, and in well-stocked Italian markets.

Also, this recipe uses minimally cooked eggs. All the usual caveats apply; I recommend sourcing eggs from responsible producers that are unlikely to have salmonella problems, but if you're worried about uncooked eggs, this may not be the recipe for you.

*Mise en place is essential for this recipe. Have everything prepared before you start!