Wisconsin, Obama and the Democrats' future 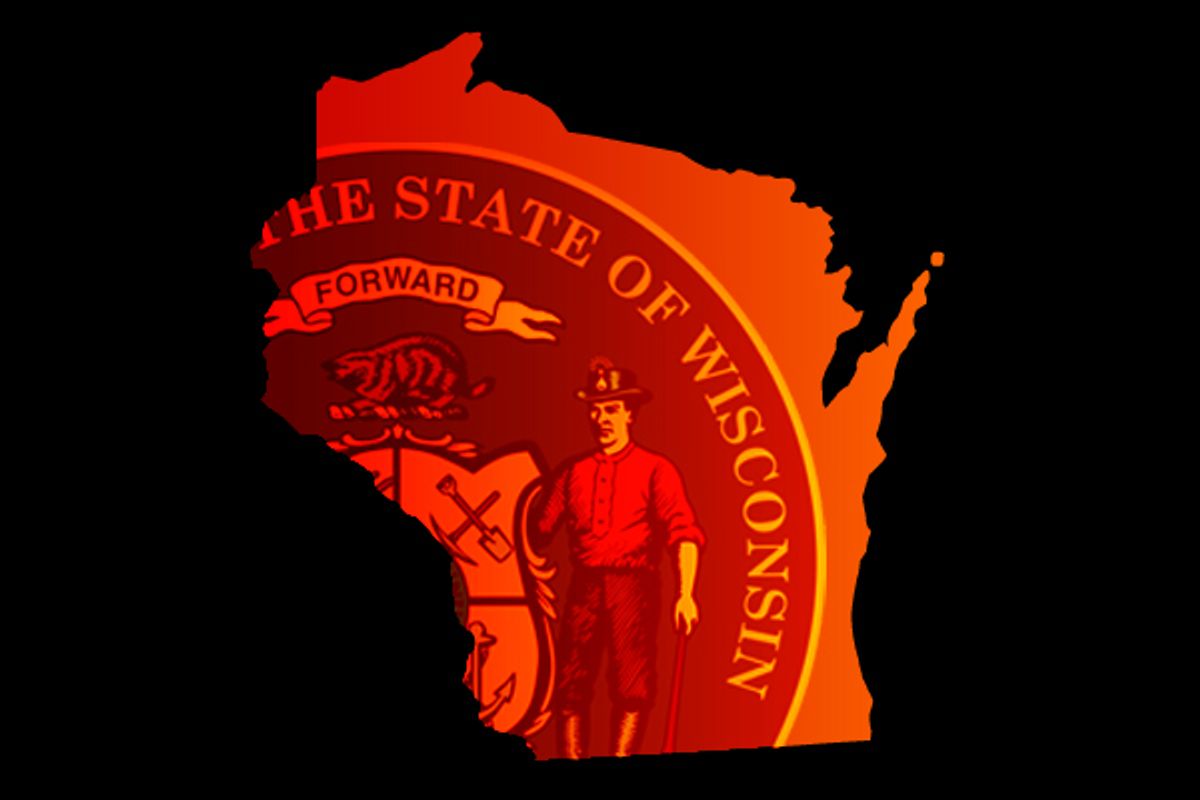 Wisconsin Republican Gov. Scott Walker did more to galvanize America's progressives – and Wisconsin's – than any real or imagined progressive since President Obama ran as one in 2008. A sleepy state Supreme Court race that just a month ago was expected to be a landslide behind the Republican incumbent, David Prosser, over Democrat Joanne Kloppenburg, a deputy attorney general, is instead a dead heat after 1:30 a.m., Wisconsin time, with a record turnout. Absentee votes are still being counted, a winner likely won't be determined until morning, and whoever comes out ahead, a recount seems almost certain. Right wing groups nationally outspent liberals on Kloppenburg's side 3-2. There were other hints of a post-Walker progressive resurgence in Wisconsin – in Milwaukee, Democrat Chris Abele won Scott Walker's old County Executive seat in a landslide against Republican Assembly member Jeff Stone.

Coming the day I explained why I think progressives should pour energy into other kinds of organizing, including state and local politics, rather than the Obama 2012 campaign, the Wisconsin results provide an example of what I'm talking about. Now that we know what state Republicans are trying to do, from Michigan to Maine – abolish collective bargaining, establish cruel restrictions on abortion, end restrictions on child labor, tear down labor murals – it's clear more of us should have been paying attention to and working hard on state races. To be fair, at least one of my readers suggests the Wisconsin election is an example of why I'm wrong: This Daily Kos diary lays out how veterans of Obama for America, the president's once-amazing then mostly moribund 2008 campaign organization, which morphed into Organizing for America, stayed together in Madison, Wisc. as a cohesive band of rebels to mobilize for Kloppenberg in the Supreme Court race and an upcoming recall of Walker supporters.

I'm going to say we're both right. I think that diary's great, and I'm happy to know the 2008 Obama campaign left behind such a great legacy of organization in Madison. On the other hand, well, it's Madison. And lest I sound like someone who scorns a liberal college town, remember I'm a Badger, and I'm proud of the rabblerousing tradition. Still, it's not like OFA was starting from scratch, organizing on Madison's west side. There's a venerable progressive infrastructure there. But let's just call that one a draw: I can't prove there would have been an organizing juggernaut without OFA; my correspondent can't prove it's all about OFA. We can agree that the vibrant "Madtown O's" show that OFA didn't necessarily drain progressive energy from other political priorities, at least in Madison.

I'm not aware of other great examples of OFAers staying together to make local change; I'm more aware of ways the folks around the White House have paralyzed OFA when it wanted to mobilize even to support the president's stated agenda, as I wrote Monday. And we all know that in Wisconsin, according to a flattering New York Times profile of investment banker/centrist Bill Daley bringing calm order to the White House, White House sources boasted of shutting down OFA's efforts to support Democrats in Wisconsin, to prove what Democrats always want to prove to the MSM and Beltway – they hate their crazy lefty base, too!

I got the most criticism from people who think the left must band together behind Obama, but I also got some from folks who think I'm too easy on the president. Even my friend (and I mean that, he's a friend!) Glenn Greenwald cited me as an example of a progressive who, despite reservations about Obama, was "vowing to support his re-election." I'm in awe of Glenn's record of accuracy; still, that's not exactly what I said (though I admit it's close). Here's what I wrote, emphasis mine tonight:

Barring something horrific, I will support President Obama in 2012. (And I read Glenn Greenwald daily, so I know there's a digest of fairly horrific things taking place in the realm of civil liberties, on top of the regular cave-ins to corporate America.) I have explained before: I think a primary race would be distracting and destructive to progressive politics. It would tear the Democratic Party apart in ways that would make that unpleasant 2008 bickering look like a love-in. As the great Michael Harrington used to say, when it comes to electoral politics, I stand on "the left wing of the possible," and that's about where I believe Obama is. So I expect to stand with Obama next year.

Not exactly a vow: It's within the realm of possibility that I wouldn't vote for Obama in November, 2012. Unlikely, but possible. So I'm not blindly supporting him despite my disagreements. Meanwhile, my point was that progressives have many other ways to advance their agenda, and demonstrate their disapproval of the president's record, besides backing a primary challenge to Obama. And nothing anyone has said today has convinced me otherwise. I know some people are dreaming about a magical unicorn campaign by Russ Feingold or Howard Dean; I don't see it. And let me be clearer about how I believe a primary challenge would hurt Democrats: I think many, maybe most, African American Democrats would stay with Obama, and the racial tension that made 2008 painful would be radioactive this time around.

On the other hand, let me say this: I deeply resent people who insist that white progressives who criticize Obama are deluding themselves that they're his "base," when his "base" is actually not white progressives, but people of color. Ishmael Reed laid out this pernicious line in December, in the New York Times, after many progressives, of every race, criticized Obama's tax cut compromise. Reed compared "white progressives" who wanted more from Obama to spoiled children, compared with black and Latino voters "who are not used to getting it all." I've been getting a similar message from some of my correspondents, and it's depressingly divisive.

I also had some folks dismissing me part of the "professional left," and I just want to say: Thanks, Robert Gibbs! If anyone wants an example of why this isn't a progressive adminstration, there it is. Why don't we just let the GOP play the politics of division to split the Democratic base; it's tragic when an allegedly progressive administration tries to do it too. Please, folks, refute my specific criticism of the president, but don't call me names. As I've said before, calling people the "professional left" implies they're getting paid specifically to criticize the president, which is a type of corruption. That's deeply unfair.

Finally, too much of the left pretends that presidential primaries are the best imaginable way to change the country; as we know from history, they're not. When we "win," as in knocking off Lyndon Johnson, we get Richard Nixon; when we lose -- as in backing Ted Kennedy over Jimmy Carter -- we get Reagan. And sometimes even when we "win" -- backing Obama against that evil conservative, Secretary of State Hillary Clinton – well, we at best draw. Let's do more of what Democrats are doing in Wisconsin -- organize to defeat, even recall, right wing Republicans -- and do less squabbling about the Obama campaign.