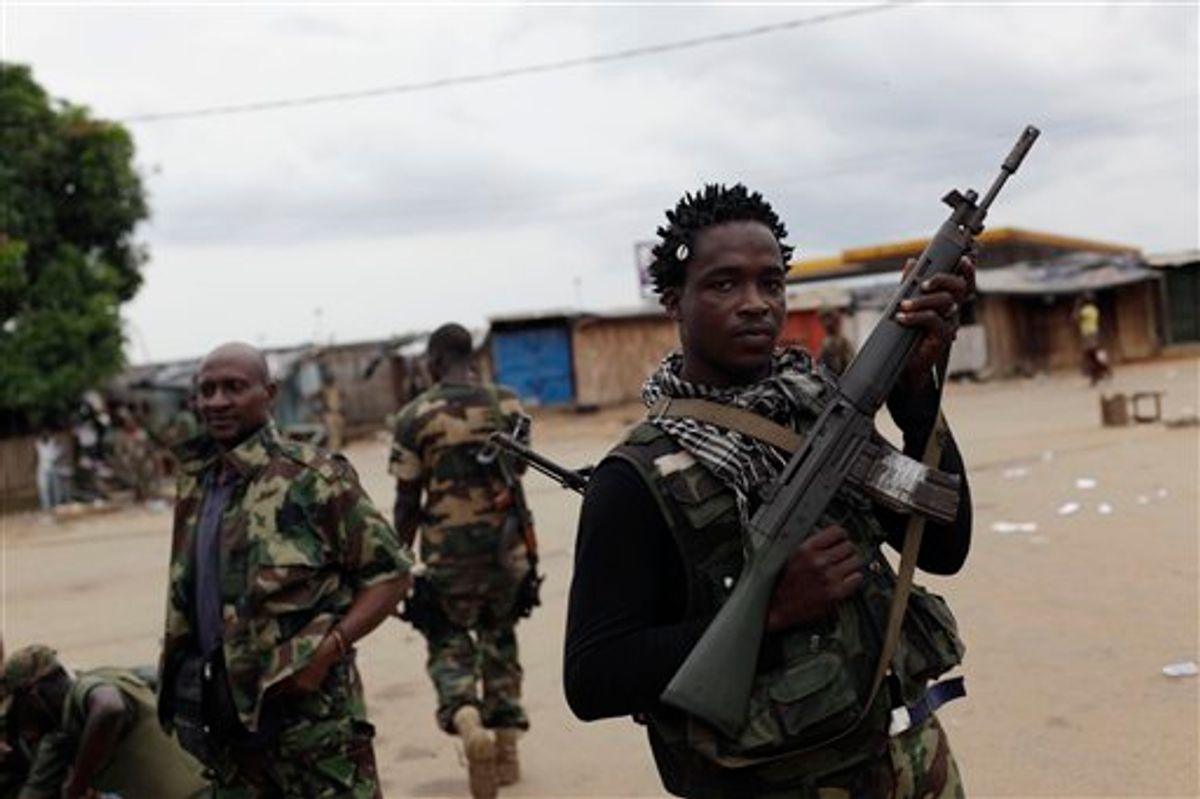 Soldiers loyal to Alassane Ouattara occupy an area of the Youpougon neighborhood, near a checkpoint at the main northern entrance to Abidjan, Ivory Coast, Tuesday, April 5, 2011. Ivory Coast's strongman leader Gbagbo holed up in a bunker inside the presidential residence Tuesday, defiantly maintaining he won the election four months ago even as troops backing the internationally recognized winner encircled the home. (AP Photo/Rebecca Blackwell) (AP)
--

Heavy arms fire rang out Wednesday near the home of the country's strongman who remained holed up in a subterranean bunker, as forces backing his rival assaulted the residence to try to force him out, diplomats and witnesses said.

A spokeswoman for the government of the country's democratically elected president Alassane Ouattara said on France-24 television that pro-Ouattara forces had entered the gates of Laurent Gbagbo's residence.

"At the current moment they have not yet captured Gbagbo but it will happen soon," Affoussy Bamba said by telephone from Abidjan. "They opened the gates and noted that the residence is surrounded by heavy weaponry," she said. "Now the objective is to capture him."

Gbagbo had appeared to be on the point of surrender on Tuesday, sending an emissary to meet with foreign ambassadors in order to negotiate the terms of his resignation. But a senior diplomat who asked not to be named because he is not authorized to speak to the press said the overture appeared to be a foil, and that Gbagbo was simply playing for time.

On Wednesday, French radio RFI broadcast an interview with Gbagbo in which he said he had won last November's election and that there was no question of him leaving.

"We are not at the negotiating phase. And my departure from where? My departure to where?" he said.

Gbagbo refused to accept defeat to Ouattara in last year's election and took his country to the precipice of civil war in his bid to preserve power. His security forces are accused of using cannons, mortars and machine guns to mow down opponents in the four months since Ouattara was declared the winner of the contested vote.

But analysts say Ouattara is acutely aware that while he won last year's election with 54 percent of the vote, Gbagbo received 46 percent -- representing nearly half the electorate. A diplomat who speaks to Ouattara frequently said that the leader is aware of the danger involved at this stage, because if Gbagbo is killed it may galvanize his supporters.

In Europe, Gbagbo's spokesman attempted to spin the attack on the residence by Ouattara's forces as a foreign intervention. He claimed it was the French that was storming the home of the former leader, a claim the French military vigorously denied.

United Nations attack helicopters helped by French troops bombarded the ruler's arsenal late Monday, acting on a Security Council resolution authorizing them to take out his heavy weapons because they had been used against the population. The international forces have not been involved in the ground attack Wednesday on the residence, said diplomats and French military spokesman Thierry Burkhard.

"France will be held responsible for the death of President Gbagbo, his wife and family members and all those who are inside the residence, which is being bombarded by the French army," Gbagbo's Paris-based adviser Toussaint Alain said. He added that "there is a real danger" that Gbagbo and the others could be killed in the operation.