By the narrowest of margins, Wisconsin voters turn to the left in a closely watched state Supreme Court election 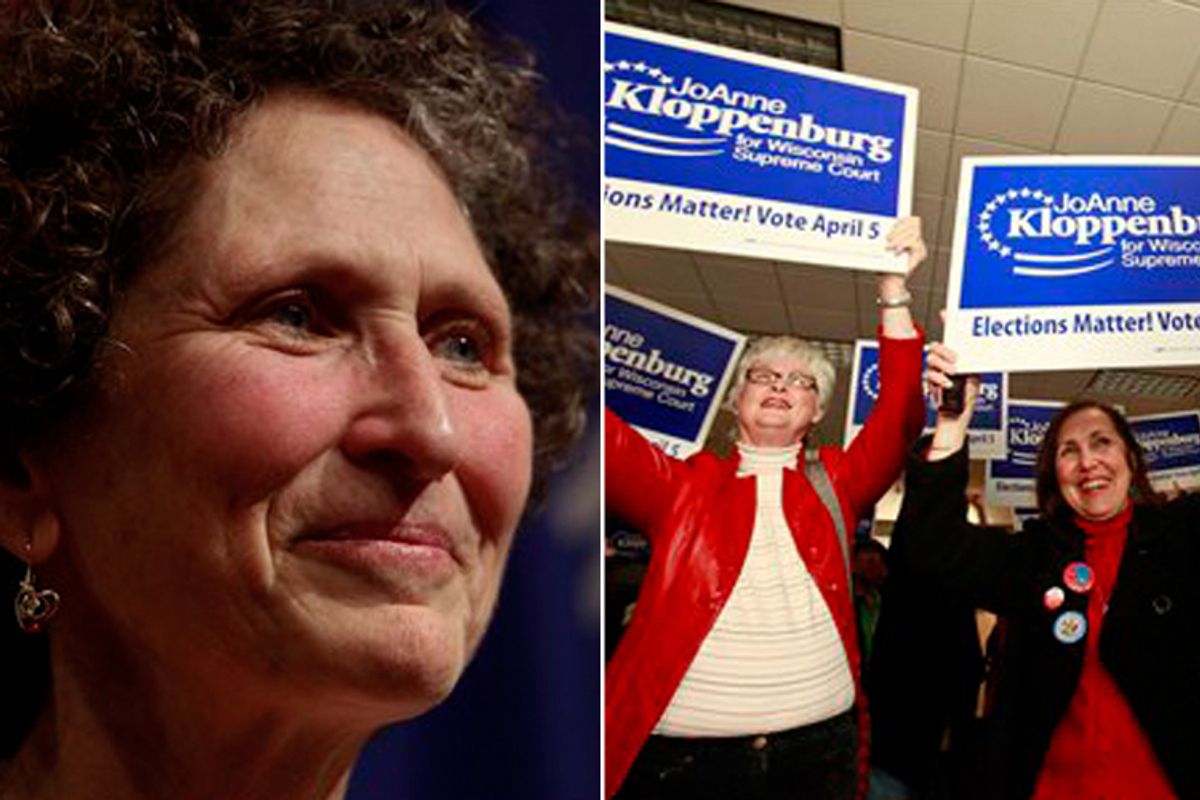 JoAnne Kloppenburg and some of her supporters
--

Call it the miracle of Wisconsin. Somewhere, "Fighting Bob" LaFollette (and maybe even Clarence Darrow) is smiling. With 100 percent of precincts reporting, the liberal candidate for state Supreme Court justice, JoAnne Kloppenburg, boasts a whopping 204 vote lead over the longtime incumbent and conservative Wisconsin fixture David Prosser. Kloppenburg declared victory Wednesday afternoon, releasing a statement to the effect that "Wisconsin voters have spoken and I am grateful for, and humbled by, their confidence and trust."

That there will be a recount appears inevitable. With a margin this small, all the losing candidate has to do is request a recount, and the state must pay the cost. In a partisan atmosphere as highly charged as Wisconsin's -- all Tuesday night long, any shift in relative vote totals was greeted with tweets alleging voter fraud or voter suppression from whichever side of the political aisle felt most freshly disappointed -- it would be foolish to imagine that these results won't be contested -- and possibly litigated.

But no matter what happens, and no matter how sharply and evenly divided Wisconsin has proven itself to be, this is still a fairly amazing result. In February, Kloppenburg managed to get only 25 percent of the vote in a primary contested by four parties. Prosser, a former state representative and speaker of the state assembly, was considered a shoo-in. Even more remarkably, in November 2010, Republicans swept overwhelmingly into office nearly everywhere in the Midwest. But just six months later, the Tea Party tide, at least in Wisconsin, has been matched by a wave in the opposite direction.

Adding fuel to liberal euphoria, a Democrat also won election to the county executive seat in Milwaukee vacated by Gov. Scott Walker. But perhaps the most important result is the one offering the biggest hint as to what happens next: Kloppenburg decisively trounced Prosser in the district currently represented by Republican state Sen. Dan Kapanke, the first legislator for whom Democrats have accumulated enough signatures to force a recall vote. With one victory -- at least for now -- notched on their belt, Wisconsin's Democrats will be eager for more.

The best evidence of what was at stake in this election, ironically, comes from the Walker camp. The night before the election, Walker's chief counsel, Brian Hagedorn, sent out an email, obtained by the Milwaukee Journal Sentinel, outlining the dire consequences of a Kloppenburg victory.

* The Supreme Court will shift from a 4-3 conservative majority to a 4-3 liberal majority.

* Governor Walker's agenda could be stopped in its tracks by this new activist majority.

* Union bosses and their allies will be emboldened and further push to recall the brave Senators who voted for Governor Walker's budget repair bill.

* (Chief Justice) Shirley Abrahamson and her allies will continue to drag down the reputation of the Court, with an additional vote to further push through their radical agenda."

One could argue about who really has the "radical" agenda in Wisconsin, but the gist of Hagedorn's email shouldn't be in dispute. Walker's opponents will be emboldened. And so will anyone else looking for evidence of what can happen when enough people get out and vote.