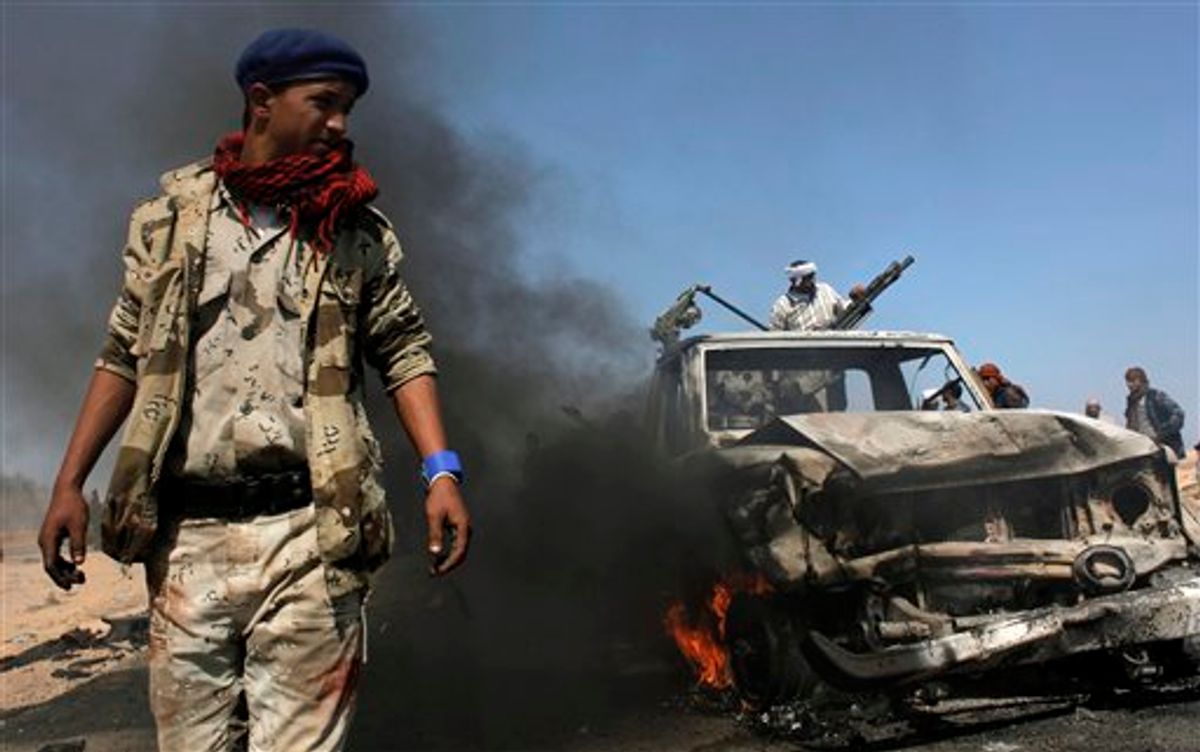 Libyan rebels inspect two destroyed military vehicles of pro-Gadhafi forces that rebels claim were targeted by a NATO strike along the front line near Brega, Libya Tuesday, April 5, 2011. Libya's rebel forces are looking more effective on the front and even scrapping back some of the territory lost to Moammar Gadhafi's army, but the rag tag fighters are still a long way from being able to march to Tripoli. (AP Photo/Nasser Nasser) (AP)
--

Libyan leader Moammar Gadhafi has appealed directly to President Barack Obama to halt what the Libyan leader called "an unjust war," and wished Obama good luck in his bid for re-election next year.

In a rambling, three-page letter to Obama obtained Wednesday by The Associated Press, Gadhafi implored Obama to stop the NATO-led air campaign, which the Libyan called an "unjust war against a small people of a developing country."

"You are a man who has enough courage to annul a wrong and mistaken action," Gadhafi wrote in the letter that was sent to the State Department and forwarded immediately to the White House, according to a U.S. official who has seen the letter. "I am sure that you are able to shoulder the responsibility for that."

"To serving world peace ... Friendship between our peoples ... and for the sake of economic, and security cooperation against terror, you are in a position to keep Nato (NATO) off the Libyan affair for good," Gadhafi wrote.

As for Gadhafi's call for a ceasefire, Carney appeared to dismiss it for now.

"The conditions the president laid out are clear," Carney told reporters traveling with Obama to New York Wednesday afternoon.

In the letter, received earlier Wednesday, Gadhafi says his country had been hurt more morally than physically by the NATO campaign and that a democratic society could not be built through missiles and aircraft. He also repeated his claim that his foes are members of the al-Qaida terrorist network.

Addressing Obama as "our son" and "excellency," Gadhafi said that his country had been hurt more "morally" than "physically" by the NATO campaign. He

"Our dear son, Excellency, Baraka Hussein Abu oumama, your intervention is the name of the U.S.A. is a must, so that Nato (NATO) would withdraw finally from the Libyan affair," Gadhafi wrote. "Libya should be left to Libyans within the African union frame."

Gadhafi said his country had already been unfairly subjected to "a direct military armed aggression" ordered by then-President Ronald Reagan, who famously called the leader the "Mad Dog of the Middle East," in 1986, as well as earlier rounds of U.S. and international sanctions.

Although he listed a litany of complaints, Gadhafi said he bears no ill will toward Obama.

"We have been hurt more morally (than) physically because of what had happened against us in both deeds and words by you," he wrote. "Despite all this you will always remain our son whatever happened. We still pray that you continue to be president of the U.S.A. We Endeavour and hope that you will gain victory in the new election campaigne."

The letter, dated April 5, 2011 in Tripoli is signed by "Mu'aumer Qaddaffi, Leader of the Revolution."