Why we need to take Michele Bachmann seriously 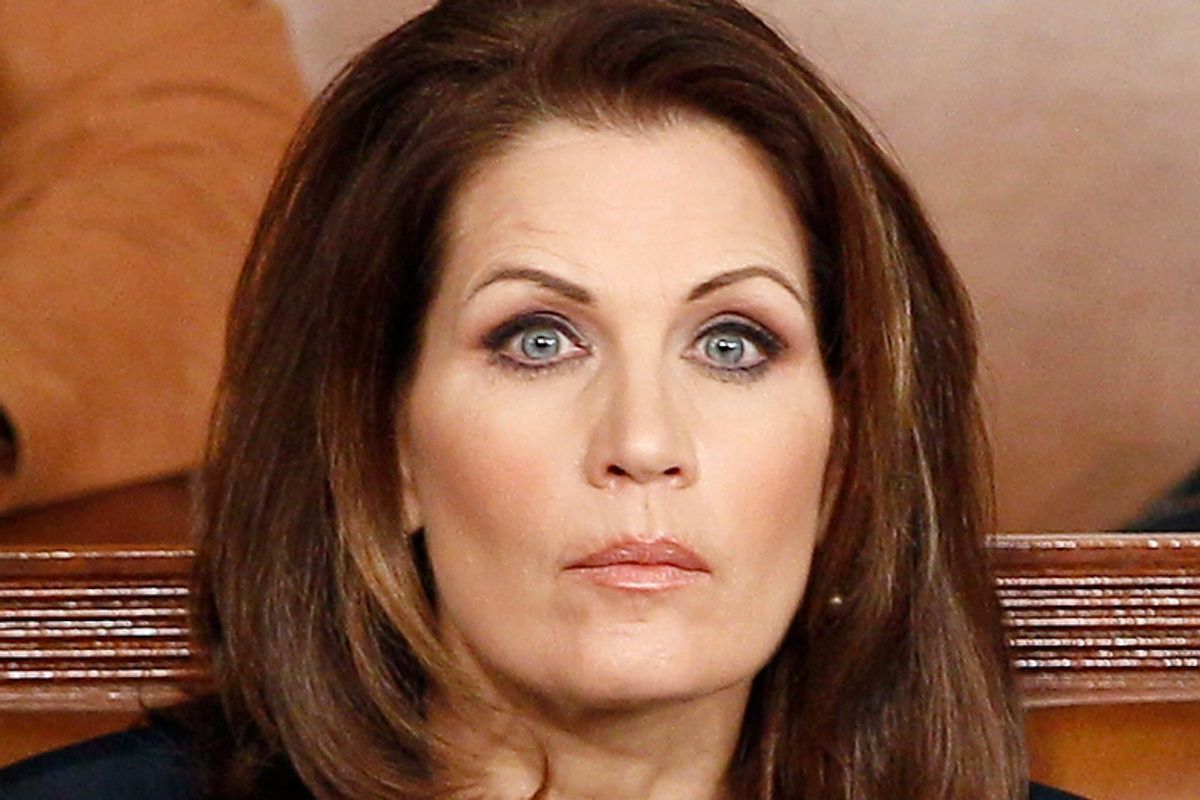 As a potential (maybe even likely) presidential candidate, Michele Bachmann is tough to figure.

On the one hand, she's attractive, television-friendly, can raise massive sums of money and commands a devoted national following.  With her various fixations and phobias, she may be the perfect embodiment of the Tea Party base that has come to define the GOP in the Obama era. On the other hand, she's clearly general election poison -- the kind of candidate who, if nominated, could (like Sharron Angle or Christine O'Donnell) frighten away enough swing voters to lose a perfectly winnable election. Given that threat, surely influential Republicans -- even those who are largely sympathetic to her -- will make sure that Bachmann is marginalized in the GOP primaries, right?

Thus, commentary about Bachmann's prospects varies widely -- from Jonathan Chait arguing that she has "a genuine outside shot to win the nomination" to Jonathan Bernstein claiming that those who take her seriously are falling for hype and that Bachmann would barely register in the early contests if she were to run. Chait likens her to Howard Dean -- the hero of (some of) the Democratic base who briefly emerged as the Democratic front-runner in late 2003 -- while Bernstein compares her to Robert Dornan (who ended his campaign for the 1996 GOP nod by literally begging a roomful of New Hampshire Republicans for sympathy votes so that he could avoid the indignity of finishing with less than 1 percent of the vote).

Both comparisons go too far.

Dean, as his popular support rose in 2003, took steps to ease the fears of party establishment figures about his electability, building mainstream appeal and scoring some unlikely endorsements. Bachmann seems incapable of recognizing the need for -- much less engineering -- such a transition. And even with that, Dean was still undercut by his perceived electability issues in the end.

At the same time, Bachmann is plainly more viable than Dornan -- or Gary Bauer, or Alan Keyes or any of the other no-shot GOP candidates of the modern era. She's demonstrated as much with her ability to raise staggering amounts of cash: $13 million for her House reelection bid in 2008 and more than $2 million for her PAC and House campaign committee  in just the last three months. If she runs for president, she will have some serious money -- something that, say, Dornan (who had essentially no budget and whose staff mainly consisted of family members) never enjoyed. Granted, this won't automatically translate into primary and caucus wins (Ron Paul proved this in 2008) for Bachmann, but it is an indication that she enjoys a wider and more committed following than your average fringe candidate. And that following has been built, in part, by what is a relatively new phenomenon: Cable news and the Internet, which has enabled  first- and second-term House members to enjoy a level of national visibility and celebrity that would have been unthinkable just a generation ago.

Bernstein notes that there's "no precedent under the current system for a junior Member of the House to even be a halfway viable candidate" for president. But there are several House members who've waged credible campaigns in the modern era: Democrats Richard Gephardt in 1988 and Mo Udall in 1976 and Republican Jack Kemp in 1988. (You can probably throw in John Anderson, who briefly sought the 1980 GOP nomination before running as an independent, too.) Sure, all of them had racked up more than a decade of House service when they ran, but will the average hard-right GOP caucus-goer in Iowa -- who, thanks to cable news, probably knows Bachmann's name and face better now than Tim Pawlenty's -- really dismiss her simply because she's only been in the House for six years? Will the average small-dollar donor who has joyfully contributed to Bachmann's PAC and House campaign really stop giving now that she's running for president? (Yes, some of them will because they'll prefer other candidates -- but many of them won't.) For Udall, Kemp and Gephardt, the main benefit of their many years in the House was that, over time, it allowed them to establish themselves as leading voices for factions within their parties. Bachmann has achieved the same thing, in a much faster time period.

If we're going to compare her to previous candidates, two better analogies immediately come to mind: Pat Robertson in 1988 and Pat Buchanan in 1996. Both had messages that resonated deeply with a significant chunk of the GOP, and both were charismatic messengers. Both also scared the bejesus out of the party establishment. In crowded fields, this was enough for them to stand out. Robertson finished with a shocking 25 percent in the '88 Iowa caucuses -- good for second place, ahead of Vice President George H.W. Bush. Buchanan took second in Iowa in '96 (four points behind Bob Dole) and then pulled off a shocking win in New Hampshire. But their early success also woke up the party establishment. After Buchanan won New Hampshire, Dole -- who had barely held on for second place, fending off Lamar Alexander -- was flooded with establishment support, putting a decisive end to Buchanan's momentum in South Carolina. Bush also used South Carolina as a firewall in 1988, drubbing Robertson there by more than 30 points.

When it comes to posting an early (and embarrassing for the party establishment) victory or near-victory, Bachmann poses the same threat. She's a genuine right-wing rock star with a credible-sounding title. More than ever, Iowa's caucuses figure to be dominated by the Obama-phobic religious conservatives with whom Bachmann has so much in common. If Pat Robertson could win 25 percent there in 1988, why can't she do the same in 2012 -- especially given the lack of enthusiasm that the rest of the field is generating? So while she probably poses no threat to actually win the GOP nomination, there's every reason to believe that Michele Bachmann can play a significant role in the nominating process. She's worth taking seriously.