Dismantling it has been the right's goal for nearly five decades, and now they have a blueprint to achieve it 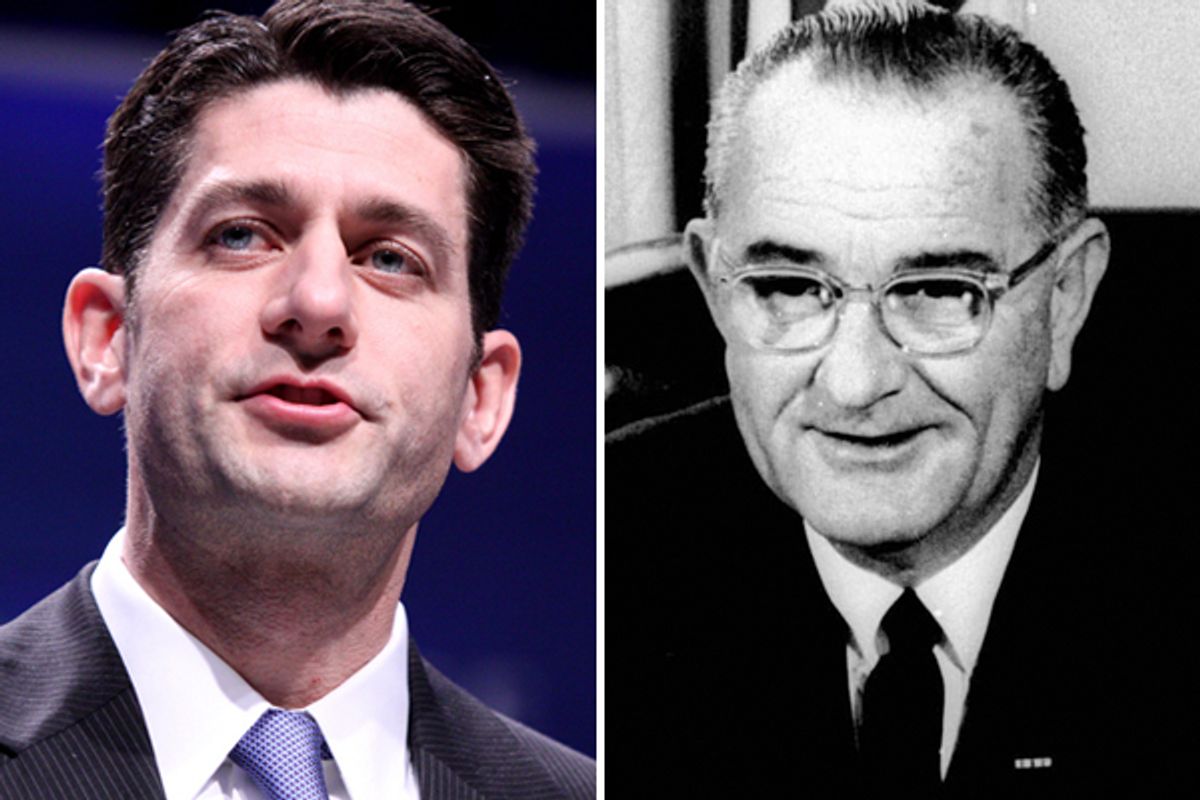 Total budget mayhem! For budget geeks, Tuesday provided an overwhelming abundance of excuses for wonkery, outrage and pontification. The prospect of an imminent government shutdown appears more likely than ever, and even if that scenario is avoided, a collision with the debt ceiling looms right around the corner. That should be enough for a normal week of political uproar. But just to make it all even loopier, here comes Paul Ryan, the Republican chairman of the House Budget Committee, with a radically ambitious plan to roll back the Great Society and fundamentally transform how the United States takes care of its poor, sick and elderly.

There's some speculation that the Ryan bombshell is merely a diversionary tactic aimed at distracting Tea Party conservatives from the necessity of a government shutdown-averting deal between Democrats and Republicans. The theory is that hard-liners will be so dazzled by the prospect of gutting entitlements that they'll swallow their intransigent pride, focus on the long game, and accept for now the reality that a divided government requires compromise. After all, isn't quibbling over the difference between $33 billion (the Democratic offer) and $61 billion (the Republican position) a waste of energy when much juicier fruit beckons?

But that kind of political calculus changes by the hour, and in the big picture, it might not be all that important. Whether a shutdown happens this weekend or not, we're still just at the beginning of a budget drama that seems set to engulf the remainder of Obama's term. Ryan's budget isn't just a neatly packaged wish list of hardcore Republican priorities, it's also the first real broadside of the 2012 presidential campaign. No matter who emerges from the Republican primary process, it seems safe to assume that he or she will be paying lip service to this newly articulated agenda. Obama will have to figure out, sooner or later, exactly how he's going to navigate this terrain.

Which raises the somewhat puzzling question of how we managed to get to this point. In 2008, all three major Democratic presidential candidates made the goal of increasing healthcare coverage for Americans a core part of their platform. Barack Obama triumphed, and as president he passed a version of healthcare reform that, no matter what you think of it, did deliver on that primary objective. With that in mind, Ryan's budget proposal is all the more amazing. Not only does it incorporate repeal of the Affordable Care Act, but it also dramatically slashes Medicaid and obliterates Medicare by transforming it into a scrawnily funded voucher program. Notwithstanding hopes that free-market competition between insurers will bring down healthcare costs (something that has never worked before in the U.S) under Paul Ryan's plan, the inevitable outcome is that even fewer Americans will have healthcare coverage than before Obama's election, and those who do still qualify will likely be paying more for less.

That's quite the turnaround. Obama won election to the presidency while promising to increase healthcare coverage, and yet a little more than two years later, Republicans are aiming to erase not only his achievements, but Lyndon Johnson's! And despite the fact that Republicans control only one chamber of Congress, the punditocracy is treating Ryan's proposals with the kind of obsessive focus that suggests Ryan's plan isn't a mere pipe dream. The proposals set forth in  Obama's own Simpson-Bowles fiscal commission set off a damp squib of reaction in response to the firestorm that has erupted in the wake of Ryan's budget release.

So, again, how did we get here?

There are at least three key elements that came together to make this possible: The economic crash, the successful generation-long Republican campaign to cut taxes, and the failure of Democrats, Obama very much included, to articulate their own vision for the future.

Republicans have managed to make government spending the overriding political issue of the day because, quite simply, the annual deficit is very, very large. This is in significant part due to the fact that the U.S. just experienced one of the worst economic disasters in its history. Preventing the financial sector from collapsing, maintaining -- and increasing -- social welfare payments even as tax revenue plummeted, and attempting to boost aggregate demand through stimulus spending all contributed to this state of affairs.

Preventing Great Depression 2.0 was an expensive proposition. We'll never know exactly how the U.S. economy would have fared if a McCain-Palin administration had declined to spend hundreds of billions rescuing the economy and simply allowed the financial sector to crash. But we should probably be glad we didn't have to live through that. When Obama took office, the U.S. economy was losing 700,000 jobs a month. Any president who didn't take immediate action to tackle that would have been endlessly pilloried.

It is, in fact, proof of Obama's success that the current "conversation" about debt reduction is even possible. If the U.S. was still shedding jobs on the scale of two years ago, the problem of funding Medicare and Medicaid would not be at the top of our list of priorities. We'd face more pressing challenges.

Of course, even without an economic disaster, the long-term rise in healthcare costs requires changes in how Medicare and Medicaid work. There's no way around that -- which, naturally, is why the Affordable Care Act includes numerous programs aimed at cost reduction. But the large present-day deficits clearly contribute to an atmosphere of panic over government spending at all levels.

Paul Ryan's "Path to Prosperity" budget isn't just about cutting spending -- it's also a platform for further cutting taxes. Ryan wants to lower corporate taxes and bring down the top individual income tax bracket from 35 to 25 percent. The Bush tax cuts would be made permanent.

The U.S. is not a heavily taxed country, either by comparison to its rich country peers, or in its own historical post-World War II context. In fact, our current federal tax burden as measured as a percentage of total GDP is at a 60-year-low.

But we do have a pretty expensive social welfare safety net -- one that's getting pricier all the time, as medical costs rise and the population ages. That math just doesn't work. You can't keep cutting taxes and provide decent government healthcare. That's just not sustainable. Republicans know this -- and are delighted by it. We're witnessing the final apotheosis of Grover Norquist's starve-the-beast theory of government. Since the election of George W. Bush Republicans have been remarkably successful at choking off the flow of government revenue. When you combine the purposeful reduction of revenue with the costs of the economic disaster, it's easy to see how Obama ended up in a bad strategic position.

But perhaps the most inexplicable aspect of the entire budget debacle has been President Obama's abject failure to vigorously define, and defend, his own vision for the future. It's not just that he's been virtually invisible through the entire course of current-year budget negotiations. He's also failed to give us any real sense of where he thinks we should be headed in the future. He has allowed Republicans to define the debate between the absurd polarities of extreme cuts and slightly-less-extreme cuts. Revenue increases? Since the tax-cut deal last winter, he's barely made a peep. When a Republican politician declares that he wants to change Medicare to a voucher program, a Democratic president should respond immediately: Not on my watch!

Obama deserves credit for getting a version of healthcare reform passed that makes a stab at controlling the rise in healthcare costs. But the Republican counter-reaction threatens to wipe out not just the Affordable Health Care beachhead but to go much further: to eviscerate the government healthcare infrastructure that has already existed for decades. It should be insufferable to any Democrat that House Republicans have been so successful at setting the agenda. When George W. Bush was president and Republicans controlled both chambers of Congress, it was entirely understandable, and expected, that an attempt to privatize Social Security would be made. But when Democrats control the White House and Senate, the Great Society should not be under siege. A legion of bloggers and opinion columnists and advocacy organizations have leapt into impressive action in the immediate aftermath of of Ryan's budget release. Where's Obama?

The wealthiest Americans and corporations are getting tax breaks while healthcare for the most vulnerable Americans is under assault. That should not be a hard message for Obama to use as a rallying cry. The timing is perfect: He declared his plans for reelection this week. Why not tell us why we should care?