Is the world's most loved/mocked luncheon meat as tasty as I remember? I run it through the gantlet to find out 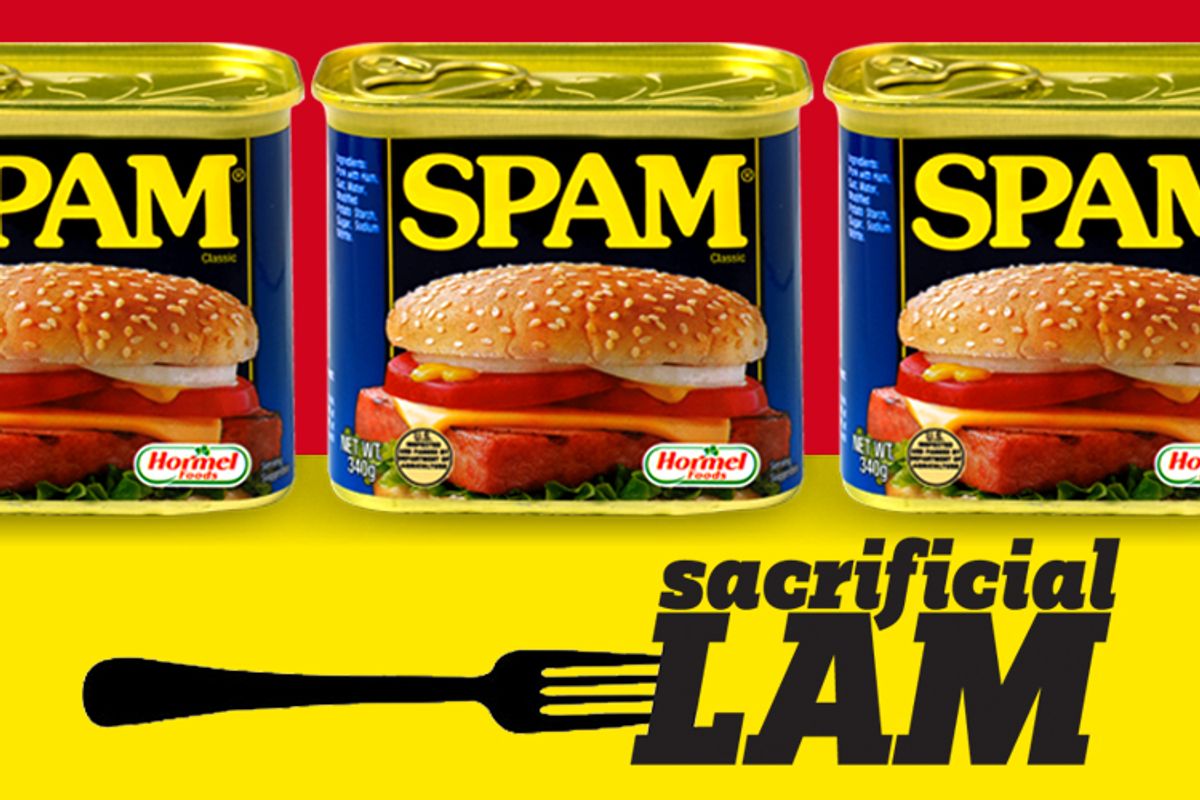 Is there a food more widely mocked than Spam? Its name was long rumored to stand for Stuff Posing as Meat. It's synonymous with Internet junk. (No, kids, they didn't name the canned pig after banking offers from dispossessed Nigerian millionaires. It was the other way around.) And well before there were ironic visits to the Spam Museum, comedy crossed into Spamland with Monty Python's famous Viking Spam sketch:

But for all the mockery, I'd always assumed that we only kid because we love. I mean, everyone grew up on Spam, right?

Turns out, no. In fact, in the office yesterday we asked if anyone had actually never tried Spam ... and the uninitiated doubled the deflowered. Where's the love for tinned luncheon meat? For the meat-ish loaf that dare not speak its name?

I suppose it doesn't help when Spam's own website reads no more deliciously than this: "What is Spam? A family of meat products that are very versatile and tasty, which can be served in a variety of ways, such as sandwich meats, salad ingredients or to make a meaty mac & cheese food dish."

Still, maybe it's because I'm Asian, or because I'm the child of immigrants, but I always assumed eating Spam was like the taking of mother's milk. The salty, porky lump is totemic, iconic. You can't pry it out of the hands of a Hawaiian. It comes standard between soft white bread and creamy scrambled eggs in Hong Kong breakfast diners. It functioned, one memorable vacation, as the meat we had to bring with us, because my father, in love with the bounty of America, insisted that we have meat at every meal.

And I have to say, through all that, I'd always loved it. I loved its soft, creamy flavor. Its comforting squishiness. But I also haven't had it in forever. How would it stack up now? Inspired by Mark Bittman's column the other day about reacquainting yourself with white fish, "Broiled, Sautéed, Roasted, Poached," I decided to give a can of Spam my own variety of treatments.

The first whiff was ... not as appealing as I remember. It's the smell of Vienna sausages, of certain blander dog foods. I tap tap tapped the bottom, until it slid out, riding a wave of its jelly, making that telltale sucking sound. You really have to admire a food that gets 78 percent of its calories from fat.

Well, if I got my hands on a beautiful fillet of fish, the first thing I'd do is slice off a little bit and try it raw, just to see it in its most unadulterated form. (I guess "alive" would count as "most unadulterated," but I'm not going there for you.) So in keeping with the spirit of things, I took a thin slice of Spam sashimi. (It's already technically cooked, of course.) It cuts like cream cheese, and peeling it off my knife, it's kind of ... beautiful. You can see the patterns of the fat and streaks as they were turned and folded, this meat mass that was once like dough.

It is salty. Very salty. But meaty, too. Ham-like, for sure -- but if ham had its own built-in mayonnaise. I don't think Spam sashimi is really something you need to try, particularly.

I seared a slice in oil, and watched it throw off grease like a 2-year-old doffs his clothes. It's an unnerving sight for the over-30 me, and when I took it out of the pan, I drained the slice on a paper towel. Am I missing the point? Maybe! But am I ready to die? No, I am a chicken.

The edges really brown up nicely, crisping up in that ideal, hear-it-more-than-feel-it way, and the inside keeps a juicy tenderness. But then that melting quality gives way to firmer, more meaty texture. I'm reminded of the taste of scrambled eggs, even though it doesn't actually taste like scrambled eggs. Must be some kind of pavlovian thing as I channel the spirit of breakfast sandwiches from decades ago. As I chew, it starts to taste a little metallic, but in a minerally way, in a not altogether bad way. But gah, the salt!

Sizzling and popping in the oven, I take out my third slice of Spam to see that it's rendered off a bunch of its fat; it's visibly shrunken. Tiny bubbles formed on the surface, translucent and crisp, and the color deepened to a brick-ish red. Flipping it over, I see the side that sat on the pan; by the color, it's nearly burnt (oops), but it's amazingly crisp, almost like a chip, in the way that bacon gets amazingly crisp.

I would have feared that overcooking the Spam would dry it out, but 1) "fear" is overstating it, since the pool of rendered fat in the broiling pan is now kept away from my body and 2) science has ensured that it is impossible to dry out Spam. Sure, it's a little chewy, but in a satisfying, jerky-like way. (In Spam, Hormel has made the ur-meat.) Once I detect the vaguely smoky flavor from the intense browning, I realize what my reaction is: This is what people love in bacon. Yes, it's aggressively salty, but with less mass, it feels more appropriate. And it's not like there are juices that keep the salt coming in waves.

Yes, I poached my Spam. If that sounds pretentious, I can tell you I boiled it. Either way, I'm sorry, but this is delicious. This is a flavor of my childhood, and I can't ever forget it. I grew up on big bowls of chicken broth full of macaroni elbows, diced boiled Spam and canned corn. (Try it. Really.)

But aside from nostalgia, boiling actually accomplishes a few things. One, most important, it washes much of the saltiness away (mostly if you cut the Spam up into small bits; if you're going for big chunks and slices, it's still salty as hell). The heat and moisture keep the Spam soft and supple, with just enough to chew on. That creamy, fatty flavor comes to the front, round and rich. Remember when I said earlier that Spam tastes like ham that comes with its own mayonnaise? This makes Spam taste like mayonnaise that comes with its own ham.

The beauty of braising is that the long, slow cooking is the cook's alchemy. It can take tough meat and turn it tender. It takes different ingredients, extracts their flavors into the sauce, marries them and then changes them, rounding them off, concentrating them, turning them into an intense form of something just a little bit other. So I seared off a slice of Spam and braised it down in white wine, applying the most magical technique I can muster to the science of Hormel. I'm pretty sure God never intended for this to happen.

At certain points, I opened the lid to find the Spam bloating up like a giant bubble. At other points it would deflate. The wine thickened with juices pulled out from the fatty Spam, and wrapped its tartness around the meat. I was sure something was going on in that pot. Maybe not something good, but something.

But then I took a bite. And after I got past the intense flavor of reduced wine and got to the potted essence of the Spam itself, I was both stunned and comforted by what I found. Nothing. Nothing changed. After all that, Spam remains Spam.