The great Wisconsin litmus test: Too close to call

A Tea Party Waterloo? Not so fast. The message from the Badger State is that nothing has been decided 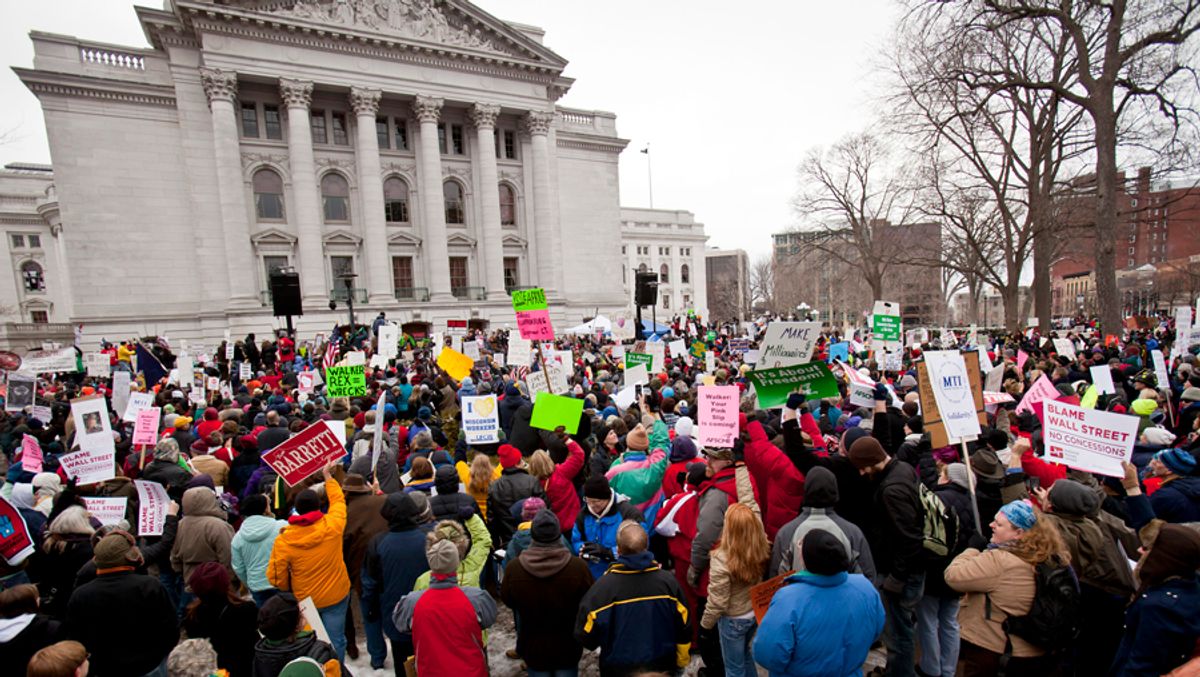 Crowds listen as Michael Moore makes a speech at the state Capitol in Madison, Wis., Saturday, March 5, 2011, on the 18th day of protests over the governor's proposed budget that would eliminate collective bargaining rights for many state workers. (AP Photo/Andy Manis) (Andy Manis)
--

Could there be a better metaphor for the current state of politics in America than this? In what was perhaps the most closely and widely watched state judicial election in the history of the United States, the contest for a pivotal state Supreme Court seat went right down to the wire Tuesday night. With 99 percent of precincts reporting,  liberal Joanne Kloppenburg led by a miniscule 309 votes, out of almost 1.5 million votes cast. But thousands of absentee ballots remained untallied and there were enough reports of counting mistakes and irregularities across Wisconsin to suggest ample grounds for a recount, no matter who comes out ahead once 100 percent of the votes are in.

So much for the first great litmus test since the midterm elections! It's hard to say what we've learned from this, other than that the base for both parties in Wisconsin is highly energized and committed.

Liberals hoping that a wave of revulsion at Governor Scott Walker's agenda would sweep Kloppenburg to victory, tilting the Wisconsin state Supreme Court from right to left, are delighted at Kloppenburg's current lead, but hardly feeling secure. And conservatives little to crow about either. In a February multi-party primary, Prosser gobbled up 55 percent of the vote, with Kloppenburg coming in far behind at only 25 percent. Her showing, win or lose, represents a remarkable turnaround. No one would have given her the remotest chance of of even coming close, if not for the extraordinary political events of the last two months.

In two of Wisconsin's biggest counties, Milwaukee and Madison's Dane Country, Democrats easily won county executive races -- including the seat vacated by Walker when won election for governor. Voter turnout was extraordinarily high for an off-season judicial election -- and recall races for state senators are on the calendar.

Of course practically speaking, a Prosser victory could mean that legal challenges to Walker's collective bargaining law will fail, so there would be more than symbolic meaning to even the  narrowest of victories for the incumbent. There also may be some question whether liberal voters in Wisconsin can maintain their drive and determination indefinitely. Does this election mark a high-water point in passion, or is it just an appetizer before the main course of recalls?

No matter what the outcome, however, the lesson for the rest of the country is that nothing can be taken for granted. For all the talk of Walker "overreach" -- the message from voters in Wisconsin is that the electorate is divided almost right down the middle. If the battle between Prosser and Kloppenburg was a proxy for opinion on Walker, then the governor has as many supporters as detractors. If that's any sign of what politics will be like nationally for the foreseeable future, we're in for a long, hot election year.

UPDATE: As of noon, Wisconsin time, the AP was reporting that Kloppenburg has a 224 vote lead, and nearly all absentee ballots have been counted. A recount seems inevitable.