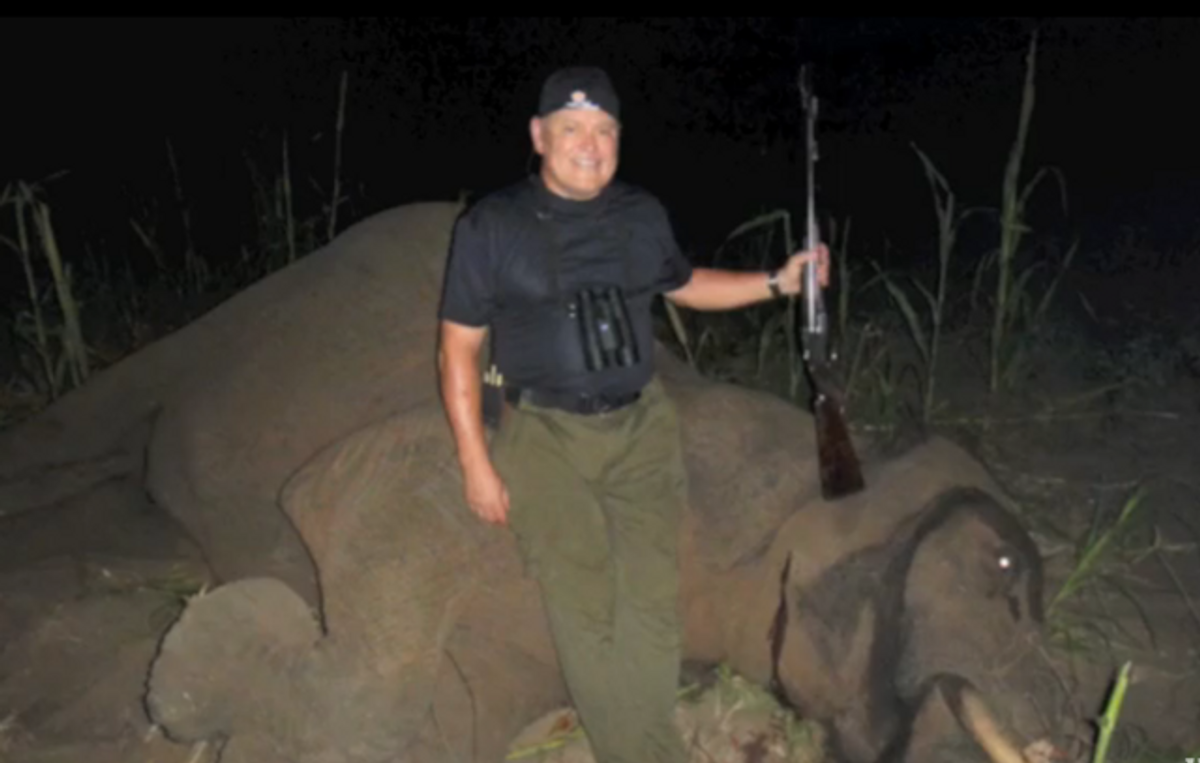 Idiotic mistake or brilliant publicity move? GoDaddy CEO Bob Parsons recently posted a video of himself killing an elephant in a sorghum field in Zimbabwe. Many were appalled. Others called it a P.R. disaster. Boycotts are underway.

But PR Daily called it a successful stunt: "This story will be dead by Sunday, and GoDaddy will have won tons of coverage." And Parsons derided critics as uncomprehending or hypocritical. He refused to take down the video, and promised to post one next year, when he plans to shoot another elephant.

However, in the last few days, the initial, more sensational video has been quietly replaced with an edited version. In this one, a trampled sorghum field in Zimbabwe is shown. Destitute villagers, the video claims, need help protecting their crop. A nighttime scene follows as "the team" stakes out the field awaiting a nocturnal elephant raid. Shots ring out. A daylight scene shows Zimbabweans in GoDaddy caps crowding around a dead elephant to divide the meat.

Cue Parsons, playing savior. "These people have literally nothing and when an elephant is killed it's a big event for them, they are going to be able to eat some protein. This is no different than you or I eating beef," Parsons told myFoxPhoenix. "All these people that are complaining that this shouldn't happen, that these people who are starving to death otherwise shouldn't eat these elephants, you probably see them driving through at McDonald's or cutting a steak."

But eating elephant really is different from eating beef. For one thing, it's unsustainable on a basic ecological level. Elephants take too long to grow up and reproduce too slowly to work as a human food source. Animals that are successfully raised for food grow fast and reproduce early. (That's why chicken is cheaper than beef and there is no giant-tortoise ranching industry.)

So, about that hypocrisy? Parsons claims he shoots elephants to save people. "If you had the choice to take a few elephants or to let people starve," Parsons propounded to Mashable, "what choice would you make?" Asserting that we must choose between humans and elephants is, of course, a false argument. There's a more stripped-down form that goes, "If it comes to a choice between a wild animal and my child, I know which I'm picking," and excuses the extermination of all wolves, mountain lions, rattlesnakes, etc. By viewing our relationship to animals as a series of false choices -- elephants or starving villagers? wolf or toddler? eagle or fuzzy bunny? -- this philosophy justifies wholesale destruction.

They ask him to shoot the elephants, Parsons says. Sure, farmers everywhere hate crop-eaters, whether they are elephants, deer or blackbirds. Fishermen hate seals, cattle ranchers hate wolves, and quail farmers hate hawks. There's a genuine land-use problem. More and more land is being occupied by farming villages. Elephants are losing land to people, and people are losing crops to voracious elephants. In Parsons' formulation the answer is to shoot a few elephants and the rest magically run "into the forest" and don't come back. There are other answers, but they're less simple, and they don't yield a Great White Hunter photograph of yourself with your boot on a dead elephant.

CNN's Piers Morgan asked billionaire Parsons why he didn't, instead, give money to the poverty-stricken Zimbabweans if all he wanted to do was help. "I don't know that one has to do anything with the other," replied Parsons.

A lot of people are mad at Parsons because they love elephants. Elephants are charming to watch. The more you learn about them, the deeper the charm goes. They are intelligent, life-long learners. They have long memories to go with their long lives. They have complex emotions and social relationships.

That's true even of male elephants -- though Parsons asserts that they're all relatively interchangeable. Parsons says that his killing of a bull "has no effect on the elephant social structure (as it is matriarchal) as well as the herd size. The reason is another bull quickly steps up and breeds in place of the bull taken."

Ah, the worthless male, sperm donor, all-you-need-is-one, theory. That's not what elephant experts say. Scientists and researchers working in Africa argue (as in a February 2005 essay in Nature) that older male elephants are critical to the social development of younger males, specifically in keeping young bulls from becoming hyper-aggressive and attacking elephants and other species, such as rhinoceroses. In groups of violent young males (orphaned in elephant culling operations) who were killing rhinos and other elephants, the re-introduction of older males stopped the killing sprees.

So, back to the hypocrisy, the other reason people are mad at Parsons. It's as if Parsons doesn't know much about elephants. (Some who saw the original video have even cast doubts about whether he knows the real sex of the elephant.) Or as if he prefers to hold an outlook that lets him shoot "huge" trophy elephants -- and do it to help the poor. Maybe someone will buy that. Others are apt to believe that Parsons shoots elephants for fun and to look tough. And on top of that, he wants gratitude from African villagers and admiration from the hometown crowd.

Idiotic mistake or brilliant P.R. stunt? Even if Parsons' video posting turns out to be a canny publicity move, and doesn't maim GoDaddy's bottom line, I'm going with idiotic mistake.