90 minutes after Japan's second earthquake in a month, the government quells fears of another tsunami 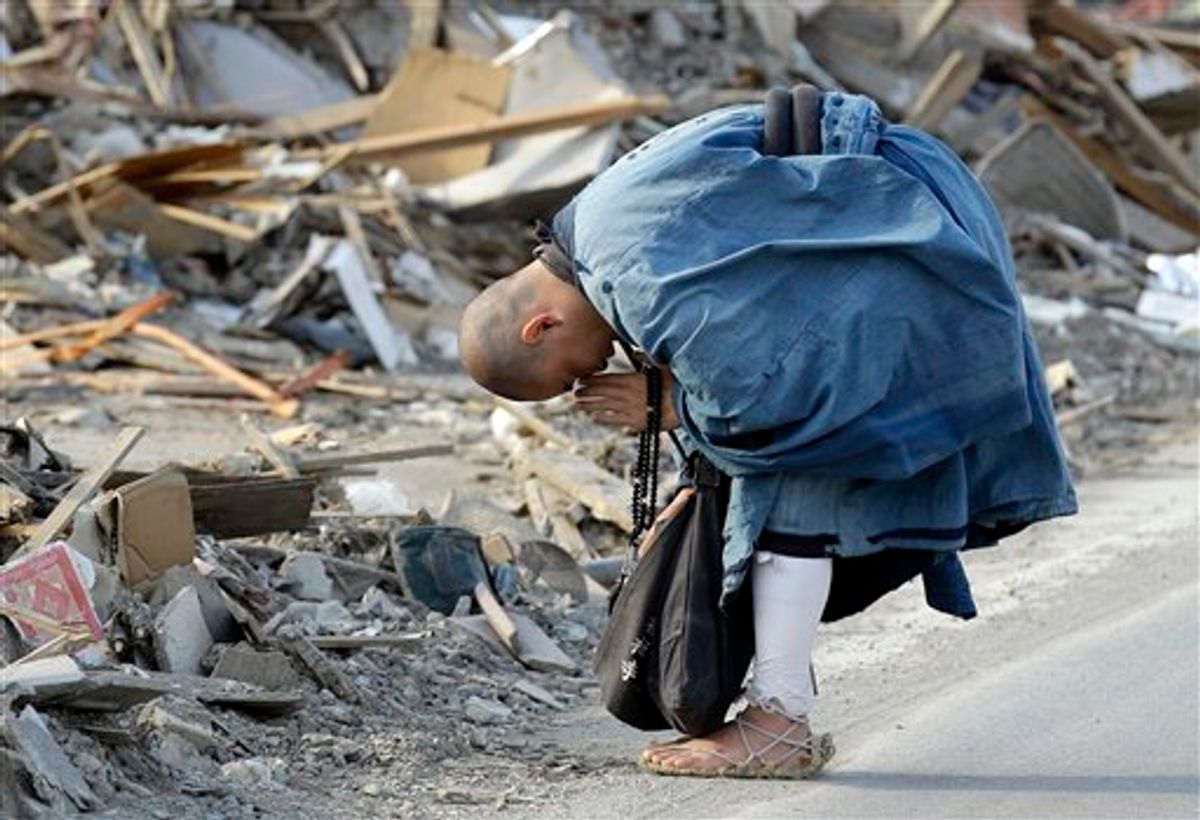 A Buddhist monk Sokan Obara, 28, from Morioka, Iwate Prefecture, prays for the victims in the debris in the area devastated by the March 11 tsunami in Ofunato, Iwate Prefecture, Japan, Thursday, April 7, 2011. (AP Photo/Lee Jin-man) (AP)
--

Japan's meteorological agency says it has lifted a tsunami warning for the northeastern coast 90 minutes after a 7.4-magnitude earthquake struck offshore.

The quake hit about 11:30 p.m. Thursday Japan time. It has rattled nerves nearly a month after the devastating earthquake and tsunami that flattened the northeastern coast.

Announcers on Japan's public broadcaster NHK had told residents in the northeast to move to higher ground away from the shore.

The warning was for the same area devastated by last month's tsunami, which is believed to have killed some 25,000 people and has sparked an ongoing crisis at a nuclear power plant.

Officials at the Fukushima Dai-ichi nuclear plant say there was no immediate sign the aftershock caused new problems.

TOKYO (AP) -- Japan was rattled by a magnitude-7.4 aftershock and tsunami warning Thursday night nearly a month after a devastating earthquake and tsunami flattened the northeastern coast.

Announcers on Japan's public broadcaster NHK told residents along the northeastern shore to run to move ground and away from the shore. An hour after the quake, there were no reports of a tsunami hitting the shore.

The Japan meteorological agency issued a tsunami warning for a wave of up to 6 feet (two meters) for a coastal area already torn apart by last month's tsunami, which is believed to have killed some 25,000 people and has sparked an ongoing crisis at a nuclear power plant.

Officials at the tsunami-ravaged Fukushima Dai-ichi nuclear plant said there was no immediate sign of new problems caused by the aftershock. Japan's nuclear safety agency says workers there have retreated to a quake-resistant shelter in the complex. No one there was injured. Plant operator Tokyo Electric Power Co. said it evacuated two workers there and seven at a sister plant to the south that was not badly damaged.

Officials say Thursday's aftershock hit 30 miles (50 kilometers) under the water and off the coast of Miyagi prefecture. The quake that preceded last month's tsunami was a 9.0-magnitude. The U.S. Geological Survey in Golden, Colo., later downgraded Thursday's quake to 7.1.

Buildings as far away as Tokyo shook for about a minute.

In Ichinoseki, inland from Japan's eastern coast, buildings shook violently, knocking items from shelves and toppling furniture, but there was no heavy damage to the buildings themselves. Immediately after the quake, all power was cut. The city went dark, but cars drove around normally and people assembled in the streets despite the late hour.

Paul Caruso, a geophysicist at USGS, said Thursday's quake struck at about the same location and depth as the March 11 quake. It's the strongest of the more than 1,000 aftershocks that have been felt since, except for a 7.9 aftershock that day.

A Pacific Tsunami Warning Center evaluation of the quake said an oceanwide tsunami was not expected. However, it noted quakes of that strength can cause waves that are destructive locally.