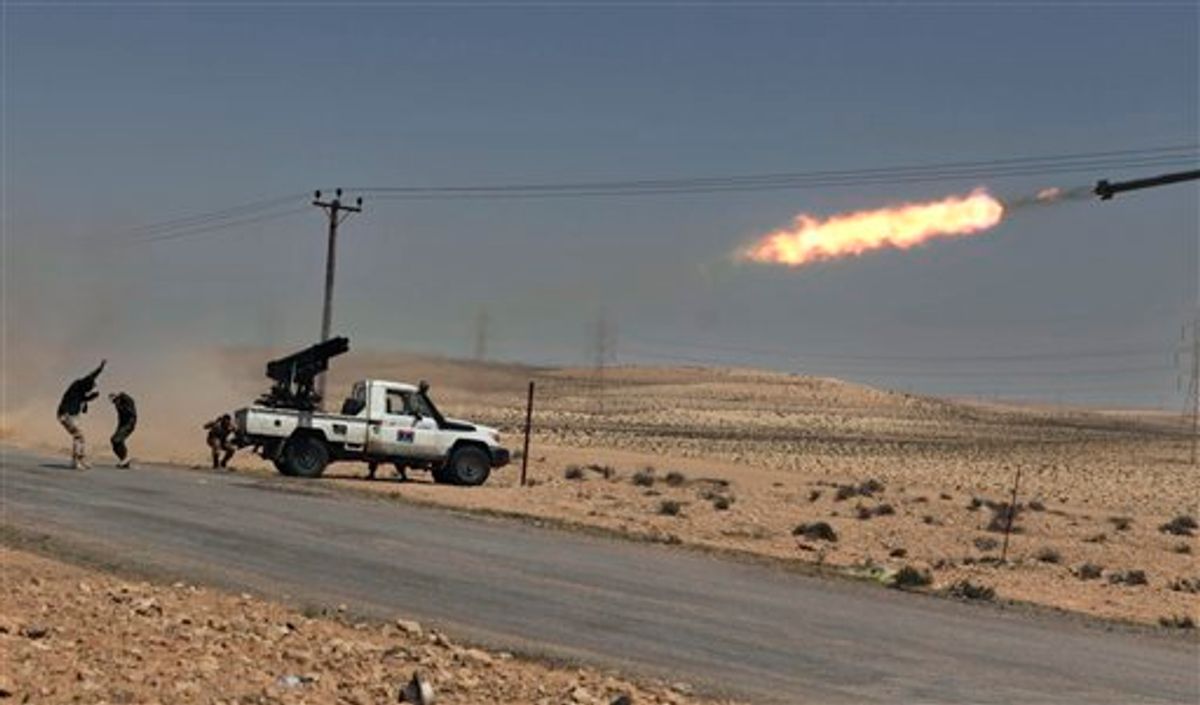 Libyan rebels shell pro Gadhafi positions just outside Brega, Libya, Tuesday, April 5, 2011. Libyan government forces on Tuesday unleashed a withering bombardment of the rebels outside a key oil town pushing them back, even as the regime said Moammar Gadhafi might consider some reforms but would not stepping down. (AP Photo/Altaf Qadri) (AP)
--

NATO on Thursday dismissed Libyan claims that Britain had struck the North African country's largest oil field, blaming Moammar Gadhafi's forces for the attacks that halted production. The eastern Sarir and Messla fields came under fire just as the rebels had sold their first oil cargo in weeks.

The Equator, a Liberian-flagged tanker that can transport up to 1 million barrels of oil, left the eastern port of Tobruk late Wednesday en route to Singapore, oil and shipping officials said. The shipment marks a milestone for the officials in Benghazi who have been steadily courting the international community in a bid to win firmer backing in their fight against Gadhafi.

Their hopes for continued exports, at least in the short-term, were dealt a blow after the attacks on the 12 billion barrel Sarir field, the country's largest, and the 3 billion barrel Messla field, forced a halt in production. The rebels blamed Gadhafi's supporters, citing three days of attacks on the opposition-held fields.

Libya denied the allegation. Deputy Foreign Minister Khaled Kaim told reporters late Wednesday that "British war planes" struck Sarir, killing three guards and wounding other workers while also damaging field equipment and an oil pipeline. He did not say how many workers were wounded. He also did not say why he specified Britain, which is part of the NATO air campaign.

"It is aggression against the infrastructure of (the) oil industry in Libya," said Kaim, adding that "all oil facilities in Libya are secured by guards ... and they are quasi-military, like private companies."

"They are armed lightly," he said. "Our forces didn't attack any oil fields."

NATO said it had been monitoring the Sarir oil fields over the past week and that attacks by pro-Gadhafi forces had resulted in a number of skirmishes and at least one fire at an oil facility.

"We are aware that pro-Gadhafi forces have attacked this area in recent days," said Canadian Lt. Gen. Charles Bouchard, who commands the allied operation. "To try and blame it on NATO shows how desperate this regime is."

Bouchard said in a statement released Thursday that alliance warplanes had not bombed the region because Gadhafi's forces were not threatening any civilian population center there.

The extent of the damage to the fields was not immediately clear, but Ghoga said the rebels would not be able to sustain the 100,000 barrels per day they had been producing for the past few weeks. He said the rebels have about 1 million barrels in storage.

That output was a fraction of Libya's pre-crisis production of around 1.6 million barrels per day, and the disruption in supply has panicked international oil markets, pushing the London-based Brent futures contract to roughly $122 per barrel while the U.S. benchmark crude futures contract was hovering near $109 per barrel early Thursday.

El-Tablawy reported from Cairo. Adam Schreck in Dubai, United Arab Emirates, and Slobodan Lekic in Brussels contributed to this report.