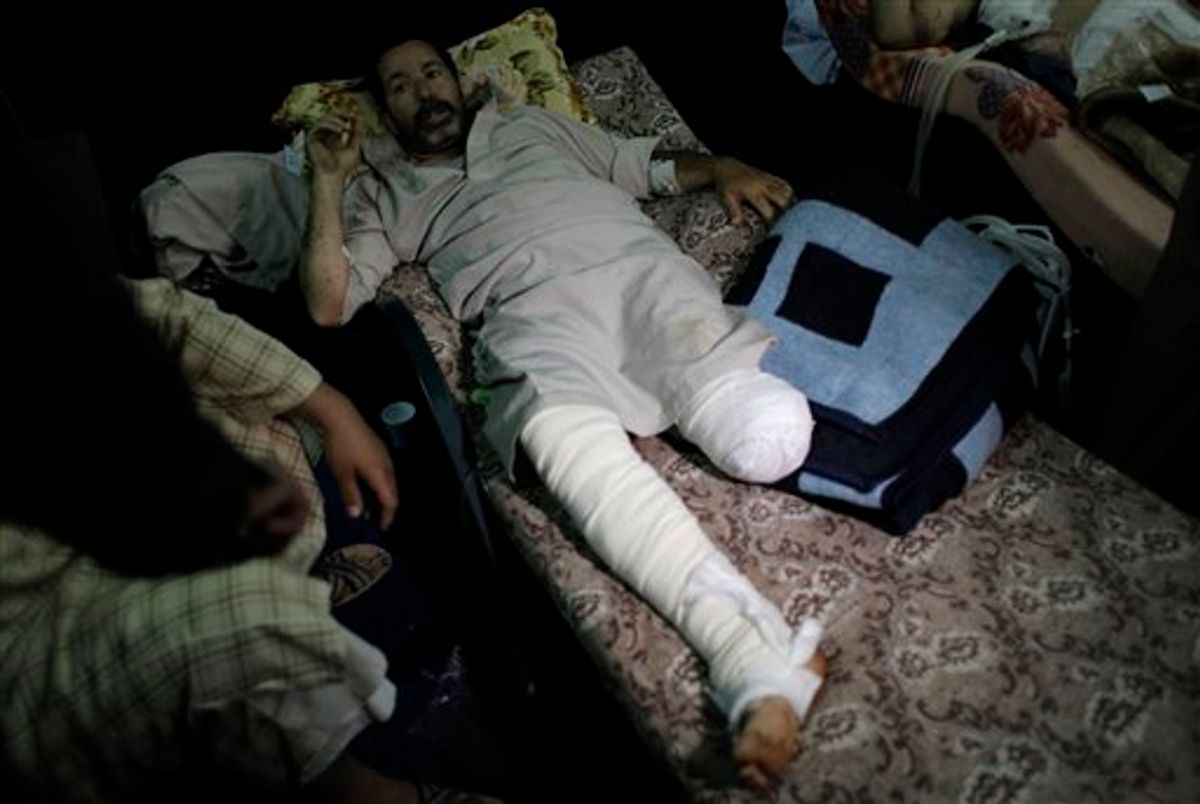 FILE - In this April 3, 2011 file photo, an injured Libyan man who lost one of his legs is seen on board the Turkish ship Ankara, carrying 250 wounded from Misrata that docked at the port of Benghazi, Libya. More than 40 days of siege, shelling and sniper fire by Moammar Gadhafi's forces have exacted a bloody price in rebel-held Misrata, Libya's third-largest city and a coveted prize in the increasingly deadlocked civil war. (AP Photo/Nasser Nasser, File) (AP)
--

More than 40 days of siege, shelling and sniper fire by Moammar Gadhafi's forces have exacted a bloody price in rebel-held Misrata, Libya's third-largest city and a coveted prize in the deadlocked conflict. NATO, leading airstrikes against Gadhafi's troops, said Thursday it is trying to find a way to break the assault.

The U.N. warned of a "dire" situation in the rebels' last major foothold in the Gadhafi-controlled western half of Libya, saying hundreds of people in Misrata have been killed and wounded and that residents are running short of water, food and medicine.

While rebels are holding out, Gadhafi's forces have made inroads. Government troops have taken control of a main thoroughfare, Tripoli Street, and set up snipers' nests on nearby rooftops, including on the city's main high-rise. Mortars, shells and gunfire have pummeled holes into homes, mosques and a hospital in the city center, and streets are lined with burned out cars and shops. Terrified families driven out by snipers have sought refuge in seaside areas, cramming into mosques, schools and strangers' homes.

The urban warfare in Misrata, a city of 300,000, highlights the rebels' frustration with what they say is the slow pace of NATO airstrikes, meant to keep back Gadhafi's forces. Western officials have said it is difficult to act in Misrata because the regime's troops are too close to civilians.

But on Thursday, NATO spokeswoman Oana Lungescu said the alliance is focusing attention on Misrata. She said the alliance's governing body, the North Atlantic Council, discussed the situation in the city with non-NATO partner nations taking part in the Libyan operation.

Rebels say NATO must act decisively and that they've given the alliance a detailed list of targets for airstrikes in areas abandoned by civilians.

"For every day of delay in lifting this siege of Misrata, more people are killed and injured," said one of the fighters who would only give his first name, Abdel-Salam, for fear of retribution.

So far, 247 bodies have recovered, but the toll is likely higher because the fighting prevents bodies and wounded people from being taken to hospitals, rebel officials say. Last week, a Turkish ship evacuated dozens of wounded from the city, including men who said they had been shot and left to bleed after being dragged into the streets by Gadhafi loyalists.

Misrata, about 120 miles (200 kilometers) east of the capital Tripoli, rose up against Gadhafi just a few days after the first protests against his 42-year-old regime erupted across Libya in mid-February. Residents opposed to Gadhafi quickly took control of the city.

But while much of eastern Libya fell to anti-government forces, Gadhafi's grip on the western part of the country proved to be stronger. His troops crushed resistance in the other main western city held by the rebels, Zawiya. Now Misrata is now the only major rebel stronghold in that area.

"We are very concerned about people trapped in Misrata, including migrant workers," Amos said earlier this week, calling for a temporary cease-fire to allow civilians to leave the area. "The situation on the ground is critical for a large number of people who immediately need food, clean water and emergency medical assistance," she said.

Moussa Ibrahim, a spokesman for the Libyan government, claimed that Gadhafi's forces fire at Misrata only in self-defense. If reporters hear the sound of fighting there, he said, that means "rebels prepared and hoping for martyrdom have attacked our troops and we have returned fire," he said this week.

The fall of Misrata to Gadhafi would largely be a symbolic blow to the rebels, but not change the course of the war, said analyst Marko Papic of the U.S.-based think tank Stratfor. It has becoming increasingly clear that the rebels don't have the military capability to launch a western offensive, lessening the city's value as a potential bridgehead, Papic said.

The closest position of rebel forces in the east is 300 miles (480 kilometers) away, and between them stands the Gadhafi bastion of Sirte, which the opposition has tried and failed twice to march on. The best the rebel leadership based in the eastern city of Benghazi has been able to do is send some supplies by ship to Misrata.

The defenders of Misrata, most of them young men without battle experience, are armed with knives, swords, handmade guns, assault rifles, rocket-propelled grenades and anti-aircraft guns.

They take shifts roaming the streets by day, trying to spot snipers and guarding the city's access roads. The local radio station broadcasts around the clock, spreading word of imminent attacks and helping residents cope with the siege.

Residents said many of Gadhafi's soldiers in the area have defected, and that the enemy's morale is low.

"They are forced into this battle. This is why they lose all the time," said Rida al-Montasser, a local activist, adding that he saw one of Gadhafi's soldiers handcuffed to an anti-aircraft gun to keep him from defecting.

Since Feb. 19, when the first protesters first chanted anti-Gadhafi slogans in the streets of Misrata, the city has rarely had a day of calm. Government forces have stepped up attacks since mid-March, disrupting communications as well as the flow of water and electricity.

Residents report a shortage of baby formula and diapers, and say only five bakeries operate on a limited schedule, until they run out of flour. Bakeries in the city center are closed for fear of snipers.

The biggest snipers' nest of several dozen gunmen operates from the roof of the city's main high-rise, known as the Insurance Building. A hospital official, who lives a half-mile (kilometer) from that building and gave his first name as Nasser, said his house was hit three times by mortars and that another shell demolished his car.

Tripoli Street has been particularly hard hit, with mosques, homes and a maternity hospital in the area damaged by shelling. During a recent visit to Misrata, an Associated Press reporter saw buildings with big holes torn into walls and black smoke billowing from broken windows. The street was lined with burned out shops, two torched tanks and uprooted trees.

In a video recently posted on Facebook, loudspeakers broadcast chants of "Allahu akbar," or "God is great," as the sound of shelling could be heard. Rebel flags fluttered in the main square and from rooftops, and rebels posed with anti-aircraft guns. In another scene, men were scene running from the area, apparently to seek shelter.

Another recently posted video showed several bodies lying on the floor of a hospital, including that of a child.

On Thursday, residents enjoyed a rare lull, in part because NATO warplanes were flying over the city, rebels said.

The most contested area now is the port, Misrata's only link to the world and until recently the rebels' supply line for ammunition from the east.

The port has come under heavy shelling, but remains in rebel hands, said Abdel-Salam, the fighter. If the port were to fall, he said, "this will be the end of the people of Misrata."