Countdown to the Tea Party's comeuppance

Tea Partyers want a shutdown and they may get one. But someone should remind them: It ain't 2010 anymore 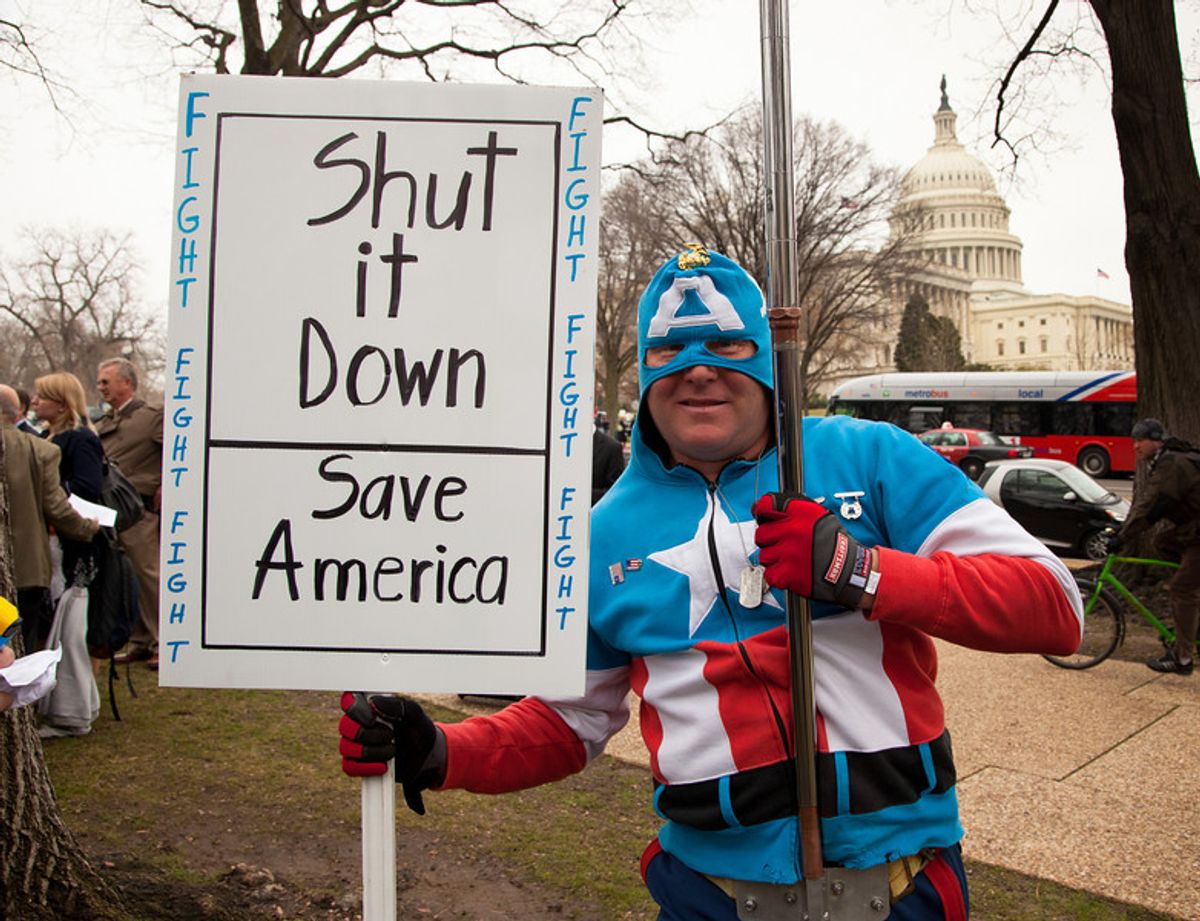 It remains to be seen whether a last-minute deal will be struck to avert a government shutdown, but whatever the outcome, the current budget impasse has vividly illustrated a political reality: The Republicans and their Tea Party base had it easy for the past two years -- but not any longer.

In 2009 and 2010, there just wasn't much that the Tea Party movement -- which ostensibly sprang up in response to TARP but quickly became synonymous with the most engaged and conservative elements of the GOP -- could do to hurt the Republican Party's midterm election prospects. Democrats tried over and over to point out -- correctly -- that the movement was fundamentally right-wing in nature, and not the broad, grass-roots coalition that its leaders claimed it was.

But this hardly mattered to swing voters. With Democrats running the White House and Congress, who really cared about the composition or ideology of the opposition? Tea Partyers could make all of the crazy noise they wanted; the 2010 midterms were always going to be a referendum on Obama and his party -- and with the economy in the pits, there was only one way that referendum was ever going to turn out. Sure, the Tea Party did hurt the GOP slightly, by powering several utterly unelectable candidates to primary victories in key races, but the midterms were still a resounding GOP triumph.

But with Republicans in charge of the House now, this formula no longer works. Now it matters what the GOP does; the party is no longer just the default vehicle for any swing voter who feels frustrated with the status quo. In this context, the extreme ideological rhetoric and demands of the Tea Party base are very problematic for the GOP.

This tension is easy to spot in the budget showdown. House Speaker John Boehner, by most accounts, would like to avoid a shutdown -- and for an obvious reason: He was in Congress back in 1995 and 1996, when Republicans paid dearly for forcing a similar standoff with Bill Clinton. But the Tea Party wants a shutdown -- badly. And the Tea Party has scores of allies in Boehner's GOP conference, many of them elected for the first time last year with Tea Party assistance. And the Tea Party's sway extends even to more pragmatic GOP House members -- incumbents who live in fear of casting the one wrong vote that will make them the next Mike Castle or Bob Bennett.

Thus, Boehner is in an almost impossible spot. If he compromises with Obama and the Democrats, he faces a potential revolt -- one that could cost him his job as speaker. (Keep in mind that the No. 2 House Republican, the intensely ambitious Eric Cantor, isn't particularly fond of Boehner to start with.) But if he placates the Tea Party by refusing to cut a deal, his party will likely suffer in the court of public opinion.

There is still no consensus on how, exactly, Americans would interpret a shutdown, but the dispute has essentially come down to ideology, with Republicans insisting on a series of inflammatory amendments involving federal funds for NPR, Planned Parenthood, the EPA and other Tea Party punching bags. At the same time, Obama has taken pains to distance himself from both congressional parties and to make the pragmatic case for reaching a deal: It will hurt the recovery if we don't! It's hard to see how swing voters won't find his posture more reasonable than the House GOP's -- especially when you consider that swing voters' negative feelings toward the Tea Party have spiked in the last few months. "Tea Party" is no longer a term that most voters associate with generalized frustration with Obama'a agenda; now, it seems, they're just as likely to regard it as the ideological movement behind extreme-sounding Republican proposals.

In this sense, the federal budget is only the most recent example of how the Tea Party and the GOP establishment are now at cross-purposes. Just consider the example of Wisconsin, where a Tea Party-backed Republican governor -- Scott Walker, who was elected in the anti-Obama tide of 2010 -- came to office and immediately pushed a plan to strip public employees of their collective bargaining rights. The backlash was immediate and intense -- and it hasn't let up yet, as this week's state Supreme Court election results indicate. While Walker didn't mention collective bargaining in his stump speech, there was plenty in his background to suggest that he'd govern as a far-right conservative. But voters in 2010 weren't too worried about this; he came across well on television and avoided the oddball antics that sunk Tea Partyers like Sharron Angle and Christine O'Donnell. But as soon as he became governor, his ideology mattered very much. It turned off the swing voters who had been so anxious to vote Republican in 2010 and woke up Democrats who had slept through '10.

Don't be surprised if this same phenomenon now plays out at the federal level. And even if a shutdown is averted this week, there will be plenty of other opportunities. Just wait until Congress begins working on Paul Ryan's budget ...