As Luarent Gbagbo is isolated in a bunker, violence from both sides continues 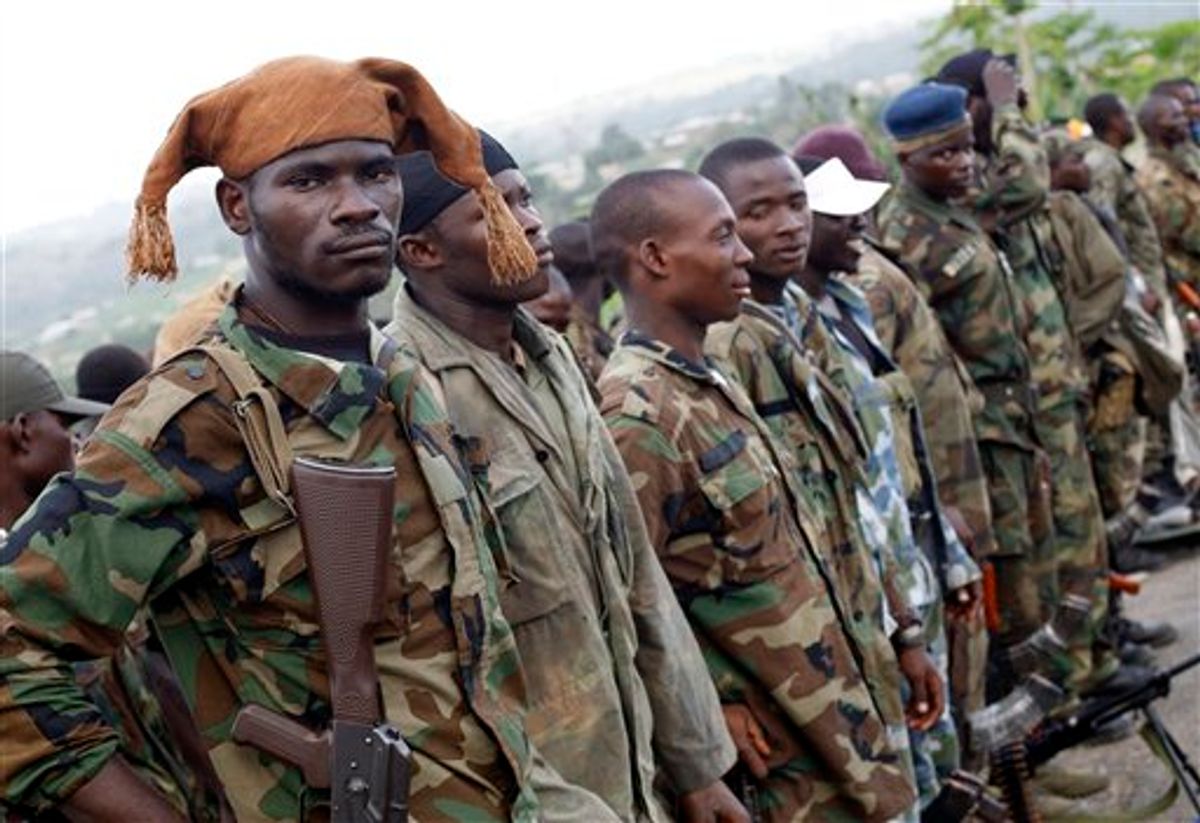 Soldiers loyal to Alassane Ouattara line up to be addressed by a commanding officer, at a republican forces operating base in the Youpougon neighborhood, on the outskirts of Abidjan, Ivory Coast, Friday, April 8, 2011. Ivory Coast's democratically elected leader said his forces won't capture the entrenched strongman who remained holed up Friday in an underground bunker at the presidential residence, and instead will focus on normalizing life in the besieged city.(AP Photo/Rebecca Blackwell) (AP)
--

France's embassy to Ivory Coast said Friday that their ambassador's residence was hit by artillery fired from positions held by forces supporting the country's strongman, who refuses to emerge from a bunker at his residence next door to the French compound.

Friday's statement said two mortars and a rocket hit the residence Friday afternoon and it is the second such attack in 48 hours. The statement did not say if there were any injuries or casualties.

The statement also noted that a U.N. Security Council resolution would permit them to destroy the weapons used to target the French compound.

Forces supporting the democratically elected president have tried for days to force strongman Laurent Gbagbo from his bunker, but he refuses to emerge or cede power.

As the military standoff dragged on in Abidjan, there were new concerns Friday about tensions erupting into deadly violence in the country's west. The U.N. said more than 100 bodies have been found in the last 24 hours, and some of the victims had been burned alive.

"All the incidents appear at least partly ethnically motivated," said Rupert Colville, spokesman for the U.N. High Commissioner for Human Rights in Geneva.

The International Rescue Committee is warning that chaos is permeating this West African nation once split in two by a 2002-2003 civil war, citing an "explosive mix of political, economic and ethnic tension."

Ouattara, who was internationally recognized as having won November's poll, said on TV late Thursday that his forces are setting up a security perimeter around the presidential compound where Laurent Gbagbo is staying with his family. Ouattara said the goal is to wait for Gbagbo, who insists he won the vote, to run out of food and water.

Ouattara said his troops will work to secure Abidjan, where people have hidden inside their homes this week amid heavy fighting between troops loyal to Ouattara and those who are with Gbagbo. The streets of Ivory Coast's biggest city and commercial center were deserted on Friday. Military vehicles had to negotiate around bodies lying in the streets. An untold number of fighters and civilians have been killed in Abidjan in the past week.

"It is the stubbornness of the outgoing president that has plunged the city of Abidjan into this grave humanitarian and security crisis," Ouattara said.

U.N. and French forces have been attacking Gbagbo's weapons arsenal, which has been used against civilians during the four-month-long political standoff.

In his speech, Ouattara also sought to jump-start the economy of the world's largest cocoa producer, calling for banks to reopen Monday and for the European Union to lift sanctions so that cocoa exports can resume, even as U.N. and French forces continue evacuating thousands of foreigners from Abidjan neighborhoods to guarded camps.

The U.N. said peacekeepers and human rights officials discovered about 60 bodies in the western town of Guiglo. Rupert said another 40 corpses were found lying the street in Blolequin, and many of them had been shot. Fifteen other bodies were found in Duekoue, where violence already has left at least 229 dead in recent weeks.

Colville, the U.N. human rights agency spokesman, said mercenaries from neighboring Liberia appear to have committed some of the killings. Liberia is still recovering from its own devastating civil war and human rights groups have expressed concern that Liberian ex-combatants were going to Ivory Coast as hired guns.

On Thursday, Gbagbo continued to insist he'd won the elections and stressed he would never leave the West African country he has ruled for the past 10 years. Even before the November elections, he had overstayed his mandate by five years by continually postponing the vote.

"I reached the head of state and his wife less than an hour ago and no, he will not surrender. President Gbagbo will not cede," said his adviser Toussaint Alain by telephone from Paris. "It's a question of principle. President Gbagbo is not a monarch. He is not a king. He is not an emperor. He is a president elected by his people."

Gbagbo was declared the loser both by his country's electoral body and by international observers including the United Nations. After four months of diplomacy, Ouattara gave the go-ahead for a military intervention led by fighters from a former rebel group. U.N. and French forces joined the effort this week.

Ouattara's forces stormed the gates of Gbagbo's home on Wednesday. But the group has stopped short of killing the entrenched leader, a move that could stoke the rage of his supporters. Some 46 percent of Ivorians voted for Gbagbo.

French Defense Minister Gerard Longuet estimates that Gbagbo has some 1,000 troops, compared to the 2,000-strong force that has been fighting to install Ouattara.

"This will be over very soon," Ouattara's envoy to the U.N. Youssoufou Bamba said in New York. But such predictions over the past week have proved wrong.

He said when Gbagbo is taken "he will be alive and well. He wants to be a martyr. We won't allow (his death) to happen."