An agnostic looking for love in the Bible Belt

When I moved to Nashville, I didn't realize that my lack of faith would affect my dating life -- or my friendships 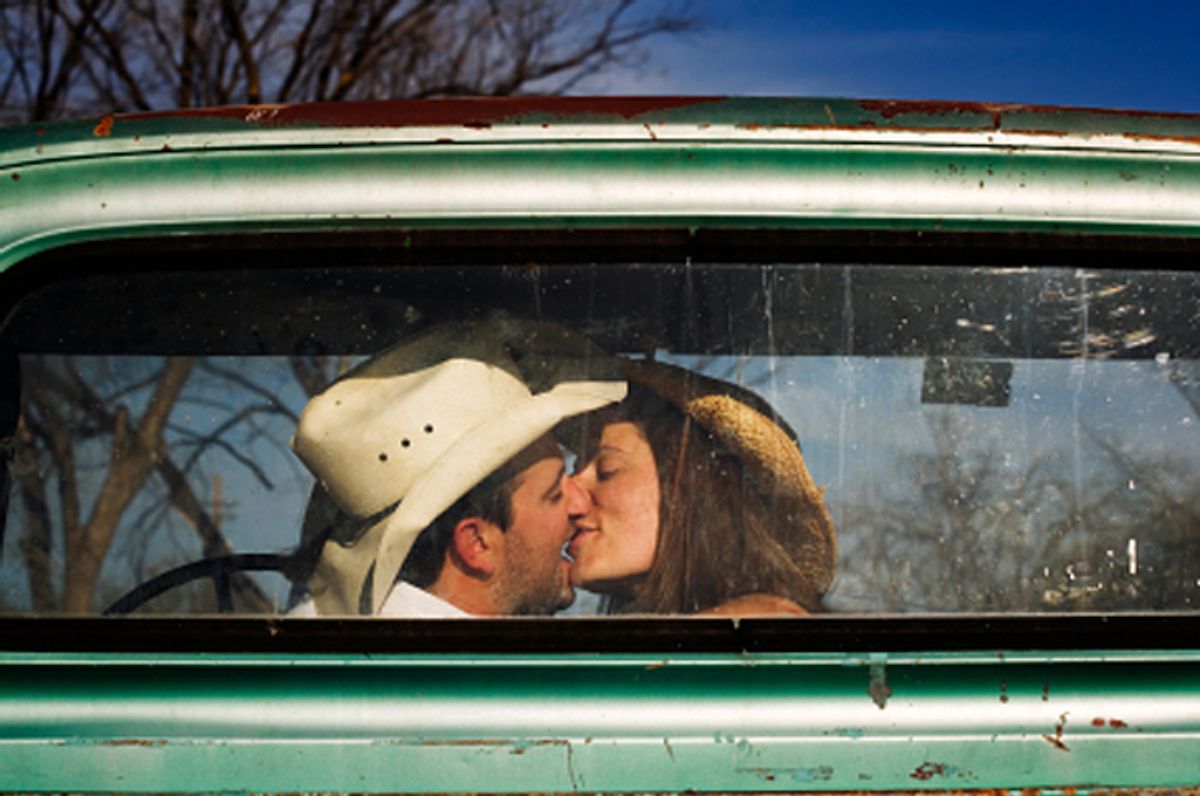 I'd only been in Nashville a few months when I met this guy -- let's call him Matthew -- at a downtown honky-tonk through friends of friends. He was sweet and charming, teaching me the two-step over a shared pitcher of beer. The following weekend, he took me on our first date to the Sunset Grill, one of Nashville's hippest dining destinations, despite being named after a Don Henley song. In his sexy Southern twang, he ordered a bottle of wine to go with the meal.

After the waiter departed, Matthew leaned across the table, almost apologetically, and said, "You don't mind that I ordered a bottle of wine, do you?"

I assured him that I approved of his choice. Still, he looked bothered.

"I just don't want you to get the wrong idea. I like to unwind with a drink now and then, but I don't drink all of the time," Matthew said. "I bet you don't either."

"Not in the morning." I laughed.

"Oh, a joke. That's funny. But seriously, do you think you'll drink after you have children?"

I was certain he was putting me on. I was 22, freshly graduated from college and unaccustomed to this line of questioning, especially on a first date. But he persisted. He'd enjoyed our tipsy two-step, he explained, but he was looking to plan his future. He believed in getting the serious business out of the way on a first date. I wondered how many second dates Matthew ever had.

"I don't even know that I'll have children," I said.

"Is that another joke?"

The wine arrived. As if to demonstrate how moderation worked, Matthew poured me half a glass, which I definitely saw as half-empty.

"Are you religious?" he asked.

"But you believe in God?"

I drained my wine glass and reached across the table for the bottle. I gave him an honest answer, though I suspected I would never see Matthew again. I said that I really wasn't sure. I certainly didn't believe that the Bible was the literal word of God, nor did I buy into stories about building giant arks and visiting whale's bellies. While I didn't consider myself a Christian or a practitioner of any other religion, I wasn't an atheist, either. To say definitively that God didn't exist seemed as restrictive as saying that he did. I was a skeptical agnostic, I concluded.

Matthew listened carefully and nodded, conceding my logic, if not my position. Maybe he was an OK guy after all.

"What do you have against God?"

Growing up in Michigan, I'd never been forced to think about God very much. My father is a lapsed Catholic. My mother considers herself a Christian, but she only took me to church on Christmas Eve and Easter, if we went at all. A few of my friends were quietly devoted to their religion, like my college roommate. She always went to church on Sunday, no matter how late the parties had raged Saturday night. But I'd never felt pushed by anyone to adopt their religious views as my own.

In Nashville, God was everywhere. While there are a few synagogues and mosques in Nashville, these aren't what I remember. What I remember is why some refer to Nashville as the buckle of the Bible Belt. You couldn't drive a block on a major street without seeing a church. Their number even trumped the Waffle Houses and Sonic Drive-Ins populating the city. The denominations were different, too. In Michigan, there had been Catholics, Methodists, Presbyterians and the Jehovah's Witnesses whose insistent doorbell ringing my family ignored Saturday mornings. Nashville had more sects than Baskin Robbins had flavors: New Christ, Apostolic, Nazarene, Alliance, Reformers and many Baptists -- Free Will, United and General, to name a few.

I learned that all of these churches were necessities, given the number of Nashville citizens who were actively, and adamantly, religious. At my first apartment, my next-door neighbors were a down-on-their-luck husband and wife. They were starting over after a tenure in Las Vegas, where they'd worked as a Hank Williams Jr. impersonator and exotic dancer, respectively. The wife got home from work each night the same time I did, always carrying a fresh case of Natural Ice into their apartment. Once they started drinking the spirit was strong in them. They often wandered down to the laundry room to tell anyone folding their whites about their friend, Christ the Redeemer.

I ended up going out with a few other guys who referred to themselves as "good Christians." One of them called the day after our date to say he felt guilty about the lust we'd acted on. I wondered if he was confusing me with another girl. All we had done was kiss for a few minutes while he'd rested his hand on the small of my back. I was flattered that our PG date had stirred such emotions, but his enthusiasm did me little good. His so-called contract with Jesus rendered his lustful feelings void where prohibited, which was outside of marriage. Though he did offer to take me to church if I ever wanted to improve my relationship with the man upstairs.

God even invaded my professional life. To supplement my paycheck from AmeriCorps, I took a job in the children's division for one of the biggest names in Christian publishing, proofreading evangelical teen series and creationist-themed picture books with names like "God Said It and Bang! It Happened." No one there questioned me about my religious beliefs -- my colleagues operated on the assumption that the whole office was Christian.

One morning, a bubbly blonde from marketing visited editorial, raving about the date she'd had the night before.

The junior editor reprimanded me gently: "I think the more important question would be, is he saved?"

And that's what it always came down to for my co-workers and those good Christians I inexplicably found myself dating. It didn't matter that I was kind, considerate and possessed a good sense of humor. All that mattered was whether I was on board with Jesus. Instead of risking disapproval, I shut myself off. I genuinely liked my co-workers, but I told them as little about myself as possible. I feared that I would become the office pariah, or more likely, that my conversion would become its pet cause. When I met guys who mentioned their church, I created a fake boyfriend if they asked for my number. This was better than being asked what I had against God on a first date.

I wasn't alienated by every Christian I encountered. One of the best friends I made in Nashville was Chris. He had been raised in the ultra-strict Church of Christ, but by then had acquired ungodly penchants for Camel cigarettes, Jack Daniel's and Kurt Vonnegut. Yet his faith still informed his life to a high degree. He was a part-time youth minister at a Baptist church, and I agreed one Sunday to come check out his sermon.

That morning, I hit the snooze button four times, having stayed out until last call the night before. I eventually got up and tamed my wavy hair into a conservative, low-slung ponytail, hoping that I would draw no attention to myself, lest someone sniff me out as a non-believer. It wasn't until I got onto the freeway that I realized I'd forgotten my directions. I found what I recalled was the right exit, found a church that fit the bill, and turned into the parking lot.

I slipped into the empty back row and sat up straight in the hard pew, feeling like a party crasher. Chris never appeared that day -- it was a Nazarene church, not a Baptist church (such are the perils of living in a city with a church on every block) -- but while I was stuck there, I saw something else. As they waited for the sermon to begin, friends exchanged animated smiles and waves across the aisles. Multi-generational families squished together in single pews, grandparents teasing laughing children. There were people my age, too, holding hands as if on a date. No one looked hung over or annoyed that they'd gotten up early.

I didn't feel the spirit that day, but I did feel jealous. I'd come to equate religious certainty with belonging in this city where I felt so out of place. I wondered, briefly, if I could pretend to believe for a while. I would make friends more easily. There would be no more Saturday nights in my apartment straining to hear the television I'd turned down low because I didn't want my neighbors to know I was staying in alone. Maybe I could call Matthew, tell him I was a reformed woman, and two-step with him once more. I imagined my acute loneliness melting away.

Ultimately, I knew that pretending to belong would be no salve for my loneliness. I quit my job with the religious publisher and started working for a business publisher instead. There, my boss was a funny and skeptical Boston transplant, and my co-workers discussed happy-hour plans, not the state of their significant others' souls. I even found a fellow Michigander to date, who enjoyed studying religion but was not scandalized by my lack of interest. I began to see that I could dodge God if I wanted, even in Nashville, though he remained impossible to escape completely.

I still felt a twinge of jealousy when I met people of unshakable faith. My second Nashville apartment was located on Belmont Boulevard, where I sometimes encountered Belmont College seminary students who invited me to Bible study groups or other God-centric events. They were always so smiley and polite even after they failed to win me over, I concluded that faith must have been a wonderful thing. Unfortunately, I just couldn't find any.

After three years, I left for Los Angeles, where I still live. It is closer to home than Nashville, proximity aside. I came to appreciate L.A. once I got used to its expansiveness and the ridiculous amount of time I spent in my car. It's a city that has room for everyone (except in traffic) and their sundry beliefs. Here, there are churches with signs in English, Korean, Armenian and many other languages; there are synagogues, mosques and ubiquitous Scientology centers dotting the city. While many of L.A.'s residents take advantage of these institutions, I've never had anyone make the assumption that I do, too, or ask what I have against God when they discover I don't.

In this permissive environment, I've actually become more open to the idea of a higher power. Sometimes, as I'm falling asleep, I'm even moved to say a prayer of thanks for my kind and supportive fiancé, our funny French bulldogs and our great community of friends. To paraphrase Joni Mitchell, I still wonder where, exactly, my prayer will go. I largely assume my thriving the past few years can be attributed to good decisions and a measure of luck. But maybe the path I'm on has less to do with my personal choices than I think. It's possible that I was preordained to move to Nashville, feel alienated and flee to a city where I fit. Here in L.A., I feel like I've been saved, even if I haven't.

Maggie Flynn is a writer living in Los Angeles.