Or so the Atlantic says. The spat proves my point: Telling some Dems, "You're not the base!" only hurts Democrats 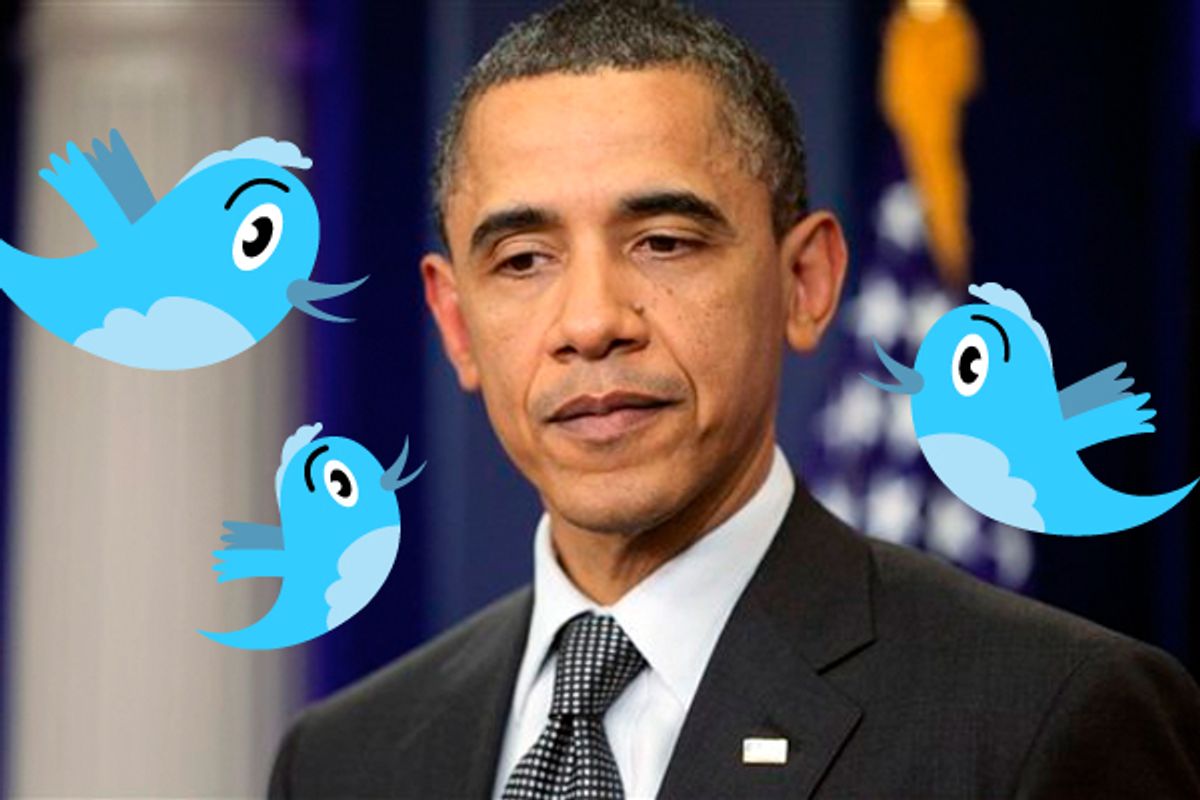 I'm a well-known Twitterholic, and Wednesday night I was going back and forth with my Twitter friends Andrew Jerell Jones (@sluggahjells) and Melissa Harris-Perry (@mharrisperry) about Melissa's and my Wednesday "Hardball" star turn defending Planned Parenthood. Ironically, at the time, we were joking about race: @sluggahjells called Melissa and me "the best black and white female duo since"… and then he linked to this clip from Sister Act, with Maggie Smith and Whoopi Goldberg (and a gang of other nuns) singing the Temptations' "Ball of Confusion," that great anthem of 1970s social and racial strife. You remember: "Why? Because of the color of their skin ... Run, run, run cause you sure can't hide ..."

Who knew I'd be living it shortly?

What happened next was surreal, though, and led to the lovely Atlantic Wire headline "Joan Walsh Sparks Twitter Brawl Over Obama and Race." In the middle of that really fun Twitter stream, out of the blue, I got these messages:

@joanwalsh read your article, I resent white progressives who pretend they are the base of Dem party and ignore AA's, we are even

@joanwalsh PBO is not your lap dog, thank god Gibbs called out the liars in the progressive media, u have done nothing but act like baggers

@joanwalsh the divisive ones are the racist ex libertarian, ex repub, ex green, fake Dems who want PBO to fail. The real base supports PBO

She was referring to my article "Wisconsin, Obama and the Democrats' future." It was the second of two pieces in two days in which I explained why, despite my criticisms of the president's centrism, I thought a primary challenge from the left was destructive.

Progressives have many other ways to advance their agenda, and demonstrate their disapproval of the president’s record, besides backing a primary challenge to Obama….Let me be clearer about how I believe a primary challenge would hurt Democrats: I think many, maybe most, African American Democrats would stay with Obama, and the racial tension that made 2008 painful would be radioactive this time around.

On the other hand, let me say this: I deeply resent people who insist that white progressives who criticize Obama are deluding themselves that they're his "base," when his "base" is actually not white progressives, but people of color. Ishmael Reed laid out this pernicious line in December, in the New York Times, after many progressives, of every race, criticized Obama's tax cut compromise. Reed compared "white progressives" who wanted more from Obama to spoiled children, compared with black and Latino voters "who are not used to getting it all." I've been getting a similar message from some of my correspondents, and it’s depressingly divisive.

And I stand by that. Notice that when I wrote that I "resent" people who make that case, I didn't specify African-Americans, because progressives of all races make that case. And it is depressingly divisive. I also loathe the term "professional left," and just can't connect with folks who compare progressives who have questions about Obama to "baggers." So I replied the way you do in 140 characters: With shorthand:

@truthrose1 Not saying white progressives are THE base; opposite. But I resent African Americans who say THEY are THE BASE. Wrong.

Later, people I respect would say it was those four words strung together -- "I resent African Americans" -- that made some folks see red; they didn't see context, let alone go read my article. Point taken. Someone suggested I might have written "I don't appreciate" rather than "I resent" -- but that's 10 more characters! If I got a mulligan, I'd go with: I resent anyone saying African Americans alone are THE base. Or something. But it's Twitter, that's how it goes.

Then I got this:

@joanwalsh history will show how the so called "progressive" wing of the Dem party was a toxic and deceitful bunch of back stabbers.

And you know, folks, I didn't see black or white, I saw red. Call me a "toxic and deceitful...backstabber" and I get a little ballistic. I replied:

@truthrose1 You're toxic, I'm sorry. Jesus. Get some help.

Not the kindest thing I've ever said or done, but in the meantime I'd begun to have several other people zinging me. And that political attitude is toxic, divisive, destructive, mean -- and part of why Democrats are so weak. (Read my upcoming book, titled, non-ironically, "Indivisible." It'll be out early next year, if I can get off Twitter.)

Then I started getting tweets from a slew of people I don't know, mostly critical. I tried to respond to questions, like:

@joanwalsh @truthrose1 @AngryBlackLady Who do YOU think is the base? :)

@cindyloveseric @truthrose1 @AngryBlackLady Progressives of every color and class are the progressive base.

@joanwalsh @truthrose1 @angryblacklady Ok. I was gonna let it go, but fuck it. Of course Black people are his base. And what about it??!!!

It went on like that for a while. People were retweeting things I said that they found offensive, trying to rile others up, but gradually, others came in, not riled, but with insight:

Whew! Race riot averted.  I'm leaving out a lot of stuff because ... it went on for hours and it makes Twitter look insane, all those @s and shortened words, when I think Twitter is awesome, even after all this. Also: I feel bad calling out one Twitter person, but those tweets touched off an explosion as well as the Atlantic Wire piece; plus, I'm leaving out people whose narcissism and divisiveness would only be further inflamed by direct attention here.

Everything seemed right in the world again until someone started it up Thursday morning. I'm not going to reprise it, the Atlantic Wire does it just fine. Here is my answer, in more than 140 characters:

But again, as I said, it's "depressingly destructive." It's the time-honored Democratic circular firing squad. It's, frankly, bullshit.

Here's who voted for Barack Obama in 2008, courtesy of CNN:

Using CNN's exit poll data, and its estimates of what percentage each group made up of the overall electorate, and rounding a little, I came up with the following (it may underestimate Asian voters; the Joint Center for Political Studies uses the same percentage for black voters).  Of 125,300,000 voters in the 2008 presidential election:

You can do the math, and draw your own conclusions. What this proves to me is that the Obama coalition is racially diverse, although clearly African-Americans are the president's most solid bloc of voters (and polling shows that loyalty has persisted during his presidency). Does that make African-Americans his "base"? I would never define "base" so narrowly. If your base is 15 million voters in an election where more than 125 million are turning out, you might be in trouble. As long as white people make up the majority of the U.S. electorate, he will need white votes. I don't think anyone's denying that.

But to declare one group his base, or his main base, or the mainstay of his base, while disrespecting another large segment of his base, seems like bad math, at the very least. Progressives grow our power by reaching out, expanding our numbers and convincing the rest of the United States of our vision of justice and opportunity. Calling one "wing" of the Democratic base "toxic and deceitful backstabbers" is, at minimum, bad politics. It's toxic.

Late in this battle, someone who first defended me then claimed that my role as a journalist requires more decorum when I'm called a "toxic and deceitful backstabber" in person on Twitter. That's hypocritical: If you want journalists and other public figures to interact personally on Twitter, when you insult them viciously (in my neighborhood, "toxic and deceitful backstabber" is pretty bad; yours?), expect a pained and personal response. At least if you talk to me that way. Other people have staff running their Twitter accounts.

But the bigger point is: If progressives of any race want to turn valid, policy criticism of President Obama into a racial issue? They'll be very, very sorry in November 2012. And so will the rest of us. I didn't intend to be part of any brawl, but if someone flings race at me, repeatedly, when I think it's unfair and divisive, I will tell you what I think.  I'll do it with right-wing racists, as I've shown here for years, and I'll do it with folks on the left. Race has divided us for too long, and people who want to continue the divisiveness are part of the problem, no matter how "progressive" they believe they are.

But to the extent that I was at times unkind in this melee, I regret it -- this next big leap our society needs to make is going to require a lot of kindness and compassion. I found this video on the Tumblr blog of someone who defended me on Twitter, a stranger (until now). It was weirdly healing after Thursday. Watch: