So you want to start a food truck? 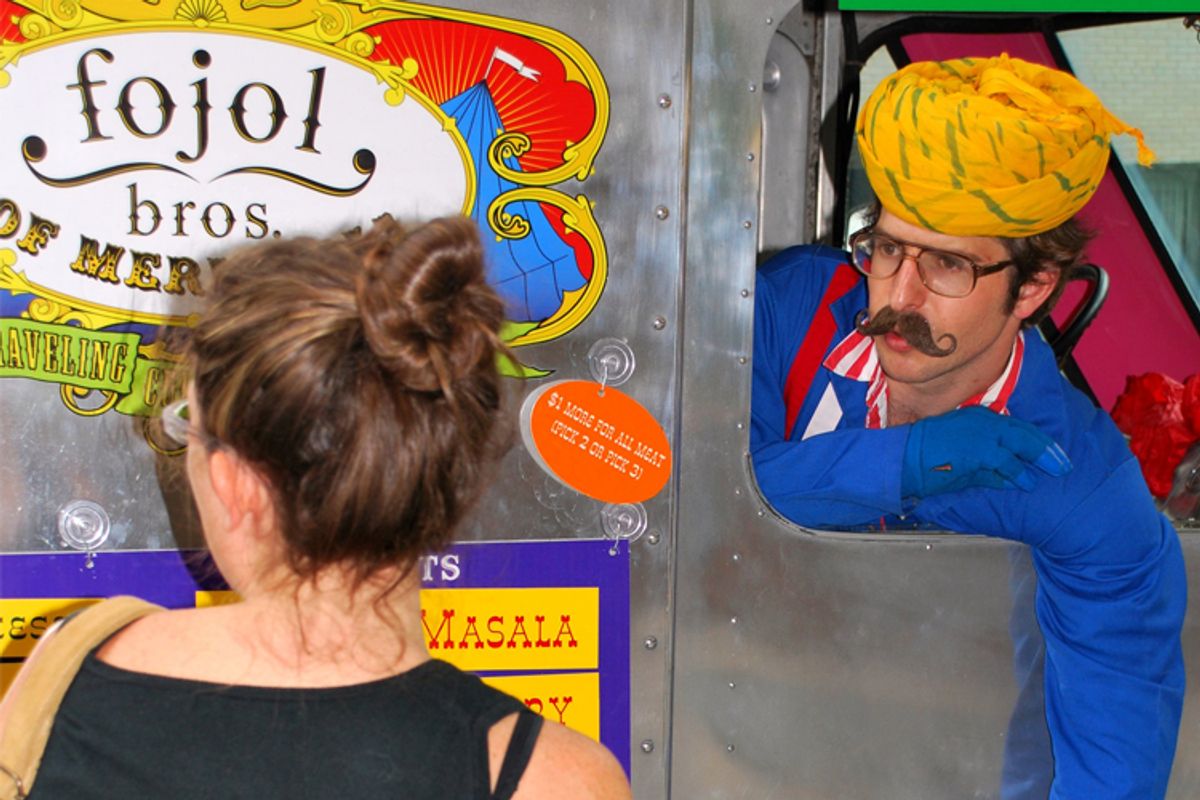 The Fojol Brothers food truck, all the way from Merlindia to the streets of Washington, D.C.
--

It's become a familiar story: poor working stiff is unhappy with life in cubicle. Poor working stiff has an epiphany. Poor working stiff can't take it anymore, quits his job, finally opens that adorable chicken-and-pie shop and takes the world by storm. It's got all the elements to seize our imaginations -- a quixotic dream, a rebellion against The Man, and a happy ending: a tangible, delicious product that is as different from an Excel spreadsheet as could be.

How did Mr. Stiff do it? For most of the 20th century, corporate drones wanting to jump ship have had a pretty reliable road map to culinary glory: You started at the bottom, maybe as a dishwasher somewhere, and worked your way up to line cook, to sous chef, to positions at steadily fancier and more expensive restaurants. Or, you enrolled in cooking school. Either route helped you build up the broad, deep culinary repertoire you need.

But the rules are changing.

Culinary credentials, or even experience, are no longer a prerequisite for success in the culinary world. More and more of these dissatisfied professionals are skipping the usual steps and reaping quick rewards. In just a couple of years since he quit his job in financial services, Luke Holden has opened three branches of his popular lobster roll shack, Luke's Lobster. Ex-lawyers driving cupcake trucks have popped up in New York, Philadelphia and Washington, D.C. (There's also a Butch Bakery owned by a proudly self-identified "former asset backed securities attorney for a major Wall Street law firm," that specializes in "bringing a totally unprecedented culinary product to market" -- the "manly" cupcake.) The Peached Tortilla in Austin, Texas, is run by yet another disillusioned lawyer. The list goes on and on.

Aside from their white-collar roots, these operations have something else in common -- a very simple, savvy business model: develop a relatively low-maintenance product, sell it for a reasonable price, and devote the rest of your energy to aggressive, compelling marketing.

The Fojol Brothers, a food truck in D.C., for example, push their marketing straight into the surreal. The brothers include Justin Vitarello, who previously worked in e-commerce, and Peter Korbel, a former financial analyst, but in their truck, they play colorful, turbaned performers of a "traveling culinary carnival" from the mythical land of Merlindia. In an interview, Vitarello briefly abandoned the shtick to explain, "Our concept involves smells and colors and music and taste." The Fojol Brothers are selling their costumes, their fantasy, their brand. Their menu -- relatively simple, Indian-inspired dishes -- might be good, but who cares? They wear fake mustaches and turbans, they play Radiohead during lunch hours. The food is a byproduct of the story.

And, as always, the TV execs have their noses to the wind. A new competition reality show, "America's Next Great Restaurant," centers around this business model. Essentially, whoever has the most marketable "fast casual" concept will win an investment from the judges to launch his or her chain. In the Top Ten, we've got upscale grilled cheese, meatballs, taco varieties and something called "the sports wrap." Almost all of the contestants are transitioning from other white-collar fields: financial services, marketing companies and law firms, etc.

The existence of such a contest would have been unheard of just a few decades ago, when being a chef held no cachet and was considered a working-class profession. But Gary Alan Fine, sociology professor at Northwestern University and author of "Kitchens: The Culture of Restaurant Work," explains that the modern food industry has been trending this way for a long time. Since the mid-1980s, we've been gradually privileging marketing concept over menu until the conditions became just right for these entrepreneurs to flourish.

First, there was the rise of the celebrity chef. "Fine dining became more accessible, more democratic," Fine said. "By the 1980s, it was certainly much more common for people to go out and eat at restaurants that had culinary pretensions, just as they explored art and music and theater. Food became cultural capital. As part of this you began to develop the idea of these celebrity chefs."

Starting with Wolfgang Puck ("he really made himself into a brand," according to Fine), chefs began to be aware of and cultivate their own images along with their cuisine. Chefs like Bobby Flay and Emeril Lagasse developed restaurant empires under the umbrella of their celebrity. And just like that, a new model was born -- not just for becoming a celebrity, but for simply making a living as a chef. In order to be competitive in the industry, self-marketing became just as important as quality of food and ambience. Aspiring chefs started hiring P.R. firms and making the Food Network rounds. They created personas that diners could recognize and respond to.

As a result, the restaurant world has shifted from primarily independent restaurants to more and more branded -- and financially stable -- collections and chains. These collections take on the characteristics of any other large corporation. And this new order changes the role of the chef. "So it's not a chef-owner situation anymore," Fine explained. "The chef is an employee, a manager, for a corporation." And the actual cooking part can become secondary.

Enter the disillusioned lawyer. "If you're a lawyer or businessperson you are likely to have the social capital and financial capital to switch professions," Fine pointed out.

In this landscape, financial capital and marketing experience are survival skills; the ability to julienne a carrot perfectly, not so much. You don't need culinary credentials to start a cupcake truck, and a cupcake truck, with the right paint scheme and Twittercisms, can now be enormously, quickly profitable -- much more so than starting as a line cook fresh out of culinary school.

Effective marketing is just one of the business sensibilities held over from these entrepreneurs' past corporate lives. According to the Wall Street Journal, 32 New York food trucks recently started a trade group and hired a lobbyist to try to change laws that govern mobile food vending. Street food vendors have most often been immigrants on the fringes of the system, and issues with licensing and parking spots have historically been dealt with outside of the system, through turf wars and under-the-radar negotiations. Now, these same issues have been transplanted off the streets into the conference room. The head of the trade group, Rickshaw Dumpling Truck co-owner David Weber, should be comfortable there; he holds an MBA from NYU's Stern Business School and has several years of business consulting experience.

Given the growing domination of the corporate model at the top of the restaurant industry, it might seem like the guys in food trucks at the bottom are the plucky rebels of the food industry. After all, they're not going through the traditional routes. They're young, they're living the dream, and they're out there on the streets every day. But consciously or unconsciously, they're bringing with them knowledge of the same rules that rule success at the top. These business-savvy career changers have been trained to understand the importance of branding. And the conditions of today's food world -- more food fans than ever, always hungry for the next new thing -- make it easier than ever to succeed on brand alone. These guys recognize that we want the packaging just as much as, if not more than, the food itself. And so they're going to give it to us, bells and whistles carefully tailored and strategically attached. There's room for innovation in that, but it seems that food has very little to do with it.