What they really mean by "American exceptionalism" 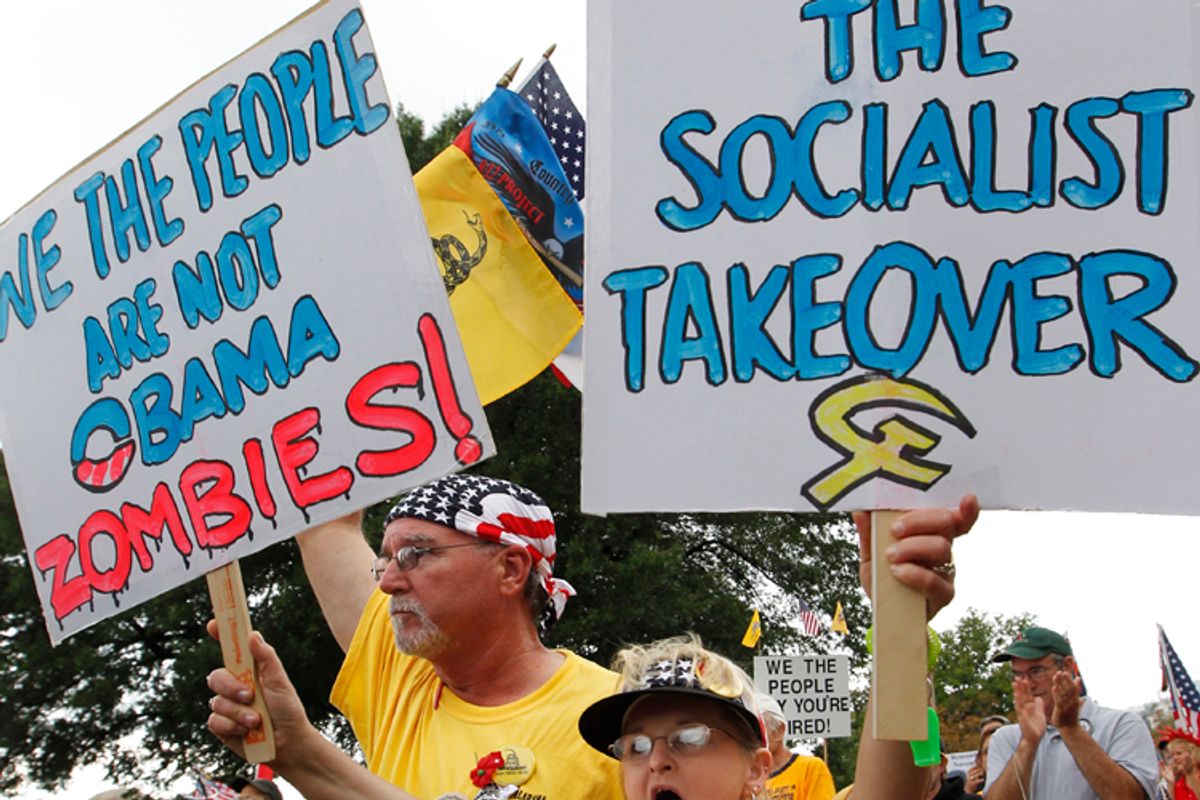 Newt Gingrich can't get enough American exceptionalism. In "A Nation Like No Other: Why American Exceptionalism Matters," due out soon, the former House speaker and prospective Republican presidential candidate gives a new definition to the term, linking it directly to conservatives' understanding of the importance of the individual relative to the power of government. "That is why President Obama and the Left hate American Exceptionalism," he writes. They hate it because it stops them from expanding government power? That’s a pretty crazy argument.

Gingrich holds a Ph.D. in history, so he shouldn't mind if we investigate where the notion of American exceptionalism came from as we track what it has come to mean. Let’s begin with some early examples of the phenomenon:

In 1771, Connecticut clergyman and future Yale president Timothy Dwight published a poem that spoke to a continent's promise. "AMERICA’S bright realms arose to view, / And the old world rejoic'd to see the new." The newness of America, its unexplored expanse, produced a kind of ecstatic expectation among Revolutionaries, which enlarged as Britain acknowledged independence in 1783. In that year, another of Yale's presidents, Ezra Stiles, proclaimed that a "great people" would arise in America; and that by the year 2000 they would outnumber the Chinese, as a nation "high above all nations which [God] hath made."

In his momentous First Inaugural Address in March 1801, Thomas Jefferson called America "the world’s best hope." That same month, to Dr. Joseph Priestley, scientist and theologian, he wrote, even more sublimely: "We can no longer say there is nothing new under the sun. For this whole chapter in the history of man is new. The great extent of our republic is new." Jefferson and his peers were men of the 18th-century Enlightenment, at once idealists and pragmatists. Their complete adoration of science augmented a belief that the world would improve as tyranny was overthrown, the cause of education promoted, religious superstition undone, and the lives of all people enriched. Americans rejoiced in calling theirs an "infant empire," morally strong and liberty-loving.

The United States was an experiment in republican government being carried out on an unimaginably large scale. From the start, American patriots needed a "brand," because they were competing for global stature with the well-developed, culturally and militarily advanced nations of Europe. Already on the defensive owing to the canker of slavery that infected the body politic -- it troubled the founders deeply -- they had to find ways to rationalize the violence that attended government-sponsored continental conquest. So they broadcast a self-anointed identity as the moral benefactors of all whom they encountered.

Surely, Newt Gingrich would be uncomfortable with the central role played by the French in promoting the positive concept of American exceptionalism. In 1782, the French cosmopolitan J. Hector St. John de Crèvecoeur authored the well-read "Letters of an American Farmer" and posed the question: "What Then is the American, This New Man?" Born in France, Crèvecoeur migrated to New France (Canada), and became an American citizen before spending his last years back in France. The French aristocrat Alexis de Tocqueville traveled to the United States in the 1830s, studying its institutions and mores, concluding as his literary predecessor had that Americans were unique. He found that their penchant for community, for joining reform-minded associations and acting in concert, made them different from Europeans.

Early Americans' sense of their exceptionalism conferred collective self-confidence. They saw America as fresh, unsullied and unique in its mission; its political culture, more humane than any other on earth. They wrote, in a maritime era, of American merchant seamen going ashore in distant lands and spreading the word of American liberty. It made good copy, reassuring them that their countrymen stood as moral exemplars everywhere. Liberty was infectious: They would bring new life to the effete Old World and encourage political progress there.

The cosmopolitan Enlightenment had morphed into democracy's worship of individual and collective acquisitiveness. In his recently published book, "The Citizenship Revolution," historian Douglas Bradburn writes: "The cosmopolitanism of the Revolutionary Age dissipated in the Romantic exceptionalism of the nineteenth century. With the opening of the boundaries of the United States into the vast space beyond the Mississippi, the country turned its mind away from Europe and began a century of precocious aggression and expansion within its own hemisphere." The secular missionaries of the founding era easily graduated to "benevolent exploitation" of America’s wild, privileging the "infant empire's" vision of growth over the rights of "less civilized" Indians and Mexicans. Romantic novels about proud Western pathfinders fed the spirit of exceptionalism.

And so it was until the imperial age that succeeded the Civil War, as the U.S. competed for colonies. Hawaii, the Philippines, Cuba were just the beginning. A modernizing military was dispatched overseas to match, and finally exceed, what the European powers had been doing all along. The degree of confidence in America’s superior system continued to enlarge, as political and economic freedom produced invention and industrial combinations that government used to grow its military and extend its reach abroad.

These, then, are antecedents. Putting Gingrich's claims aside for the moment, two questions Glenn Greenwald posed in Salon on March 29, with respect to the administration's limited role in Libya and elsewhere in the Islamic world, remain unanswered: "Does the U.S. indeed occupy a special place in the world, entitling and even obligating us to undertake actions that no other country is entitled or obligated to undertake?" And, "Is it merely our superior military power, or is there something else that has vested us with this perch of exceptionalism?" It is unlikely that the public will agree on its answers to these questions any time soon.

We should pause for just a second to reflect on how the actual term "American exceptionalism" was first used in print. According to the Oxford English Dictionary, it was Marxist periodicals of the 1920s that adopted "exceptionalism" in recognizing that labor conditions in America suggested a strategy distinct from that which communists were using to advance their cause in Europe.

With or without Newt Gingrich, the tone communicated by the ever-evolving term "American exceptionalism" will continue to be an indicator of one's political identity. It is unfortunate that the political discourse these days dictates that you can't love your country if you don't believe in its exceptionalism. Such oversimplification is one of the reasons why national campaigns focus on symbolic language instead of substantive problems and the alternative plans candidates propose to resolve them sensibly.

Exceptionalism seems to mean, "We lead, others follow." Instead, let's try: In spite of our commanding power, we lead judiciously by consulting with allies and seeking widely agreed-upon solutions to international crises. Can't America be unique among nations without dictating? That seems to be the true articulation of President Obama’s view of the contested term. His restrained view of exceptionalism (the Brits have theirs, the Greeks theirs, too) is an attitude, a sensibility, responsive to recent history; it flows from the recognition that the Bush-Cheney crowd promptly squandered the goodwill of the world after 9/11 by making unilateral decisions, and invading Iraq under false pretenses. But in a speech at Liberty University last fall, Gingrich insisted that Obama’s reference to the Brits and Greeks "proves" that he doesn’t have "any idea what American exceptionalism is."

Has America lost its mojo in the Obama age? Wall Street’s reckless self-aggrandizement and persistent joblessness aside, there’s no reason to think it has. But the panicky voices that cynically (perhaps destructively) call for artificial testaments of jingoistic pride make it sound like the president, with his measured approach to just about everything and his fundamental discomfort with strutting and boasting, is not "American" enough.

Let’s call things what they are: Personalizing the exceptionalism question is a partisan tactic. The president’s cosmopolitan bearing and generous spirit -- the core values of the secular Enlightenment that gave birth to the idea of America -- are being translated as somehow subversive of a "real" American character. It’s never explained, of course; but when it's not code for a critic's sublimated racism, it's the fear-projecting notion that we are locked in a cultural zero sum game and if the U.S. compromises on its long-declared justification to use its power wherever it wants to, then somehow the nation forfeits its preeminence and cedes to the Europeans (or worse, China) the claim to 21st century dominance.

If this devaluation of American power occurs, it will not come as a result of a president’s reasonableness. In any case, Obama has only compromised America’s values by allowing the conservatives’ perverse message of fear (e.g., Obamacare will take away your freedom) to win adherents. American exceptionalism is, in truth, not a tangible or measurable quality, but a buzzword that promises -- with no reliability -- that the sky won’t be falling any time soon.

Historically, exceptionalism has never been incompatible with isolationism. Those who consider Obama poisoned by "foreign ideas" (as conservatives of the 1790s claimed Jefferson was!) are expressing the flip side of an argument; whether it makes logical sense hardly matters. Gingrich's new book, called a "blockbuster" and a "game-changer" by his publisher, wants to make the conversation about big versus small government. He also promises to bring God into the equation, as part of his 2012 effort to distance Obama from both Christian values and what the history-conscious conservative cherishes most: the founders’ God-scented definition of American exceptionalism. Of course, Gingrich’s premises are wrong: Exceptionalism made convenient use of, but did not need, God; and it was never about left versus right.

Gingrich earned his Ph.D. from Tulane University in 1971, the year that Liberty University was founded by Jerry Falwell. Newt's dissertation, never published, was titled: "Belgian Educational Policy in the Congo, 1945-1960." We would not challenge his authority in this area. But he claims to be an authority on U.S. history, where his reading appears to be rather selective. At Liberty, when he previewed his forthcoming book, he warned that "American Civilization is in greater trouble today and in greater danger of disappearing than it was in 1971." He went on, seizing his new mantra: "American exceptionalism refers directly to the grant of rights asserted in the Declaration of Independence." And who does he say is to blame for deliberately undermining a proper reverence for America’s founding documents? "The secular socialist assault on historic America has been growing for more than two generations among our intellectual elites in schools and news rooms and the entertainment industry and increasingly among judges, bureaucrats, and now elected officials."

This is what we have to look forward to as Newt traverses the country in quest of next year's GOP nomination. He will reduce the notion of American exceptionalism to simple black and white. The new American exceptionalism debate will invite insecure potential voters to add to their existing stock of catechisms: They don't care to explore the spectrum of meanings that the word "freedom" possesses; they know "socialism" only as "government invasion"; and they survive on the faith that America is "the greatest country in the world." And that’s how things will remain for a while, because subtlety doesn't poll well.

Andrew Burstein and Nancy Isenberg are professors of history at Louisiana State University and coauthors of "Madison and Jefferson."