Apps for the middle-aged

Can't remember what you were just saying? Don't know who that nice lady is? Here's technology you could really use 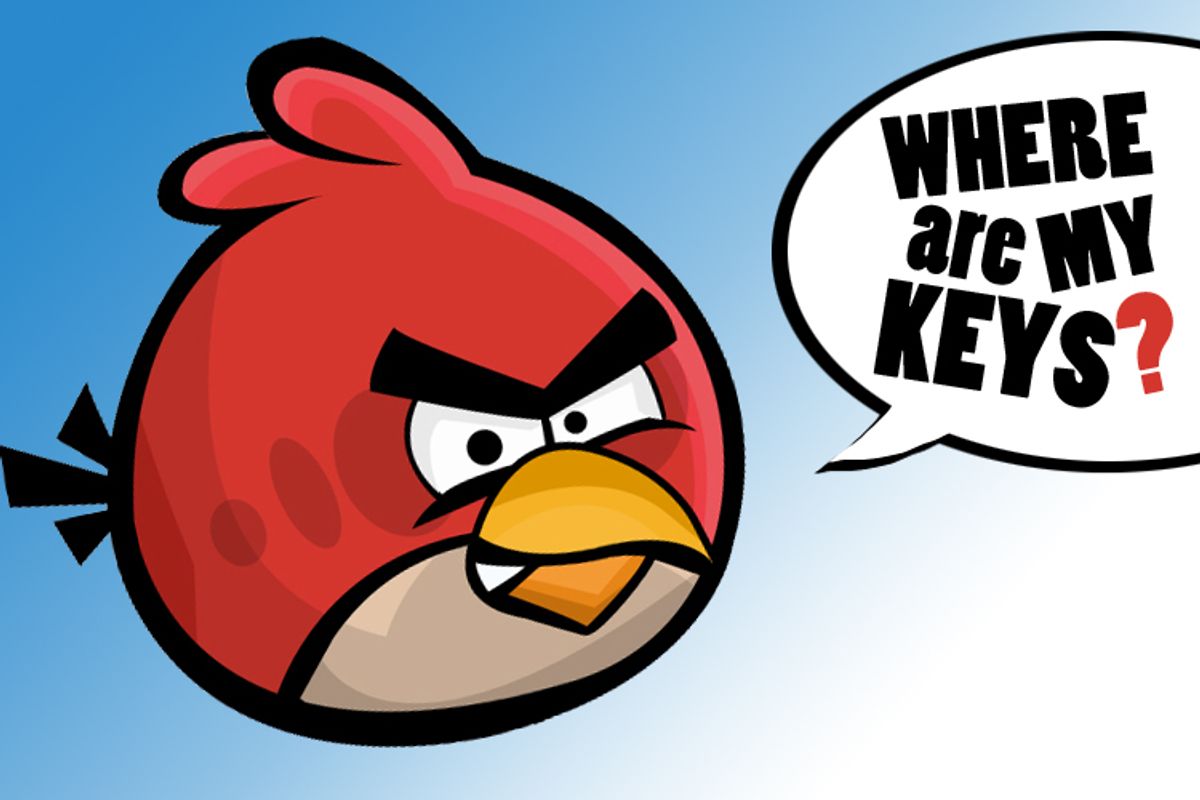 You are standing outside your house, keys in hand, checking your email, when you realize you don't remember what you are doing. Are you going in, or are you going out? Are you on your way to buy salsa or lens cleaner or antifungal foot cream, or do you have to pay the cable TV bill before they shut off your service? Maybe you are 25 minutes late for soccer practice pickup? This app will remind you what you are supposed to be doing and steer you in the most appropriate direction.

You have a very important email you need to answer. You are at least 96 percent sure. You either saved it as a draft or forwarded it to yourself, but now you can't find it. Maybe you sent it to your personal email, or maybe that old email address you used to answer personal ads until you got married and now only once in a while. You can't remember what the email was about, but it was urgent, and you just didn't feel like dealing with it, because you were busy, which isn't your fault, is it? It was a job referral, or a vacation conflict, or a 401K rollover problem. Maybe it was from your health insurance person? Then again, it might have been a voice mail or a text. Enter a subject, an idea, a feeling or a color, and this app will find it.

You've been watching "NCIS" via reruns and now you want to catch the new episodes, especially since you're not sure if "Top Chef" is a rerun and what happened to "The Monk." But you're not sure if the new "NCIS" is on CBS Tuesday night or on that channel next to TNT Wednesday nights. And then you liked that other show, either on FX with that comedian who was on HBO, or on Showtime with that British comedian who had a show that was remade on Comedy Central. Or maybe Australian. Tonight is Tuesday and you need to know what shows you watch or record to watch on that other night when nothing new is on, at least until spring, or the DVR. Or that woman with the big forehead.

"No Degree of Separation"

You're at the airport and a guy says, "Hi," and you know him really well except you don't remember how or from where or when. His name is Josh and he as a kid named Ben or his name is Ben and the kid Josh. He's a good guy and he worked for your company and left or has kids at the middle school with yours or a dog like you had growing up or his wife was born in Philly or went to Rutgers or he looks like your cousin Andrew. Who can you text for a clue? Was he the math teacher you played softball with or the guy who is friends with your friend Michael who spilled wine on your good pants at that bar mitzvah or wedding or documentary film screening? Or Big Tommy and the flat tire and the Eagles game or the farmer's market? Or was he talking to the guy behind you?

Last night in your car you had this incredibly amazing idea for an invention. It was something really simple that people would want like crazy and would make piles of money and save tiger habitats or keep poor children safe or reduce the carbon footprint and also prevent you from hurting your thumb. But it also might have been a screenplay idea, because you always get breakthrough screenplay ideas in the car. Although, now that you are thinking about it, you were watching YouTube and eating caramel popcorn last night and were out driving Monday or Thursday the week before. Maybe you passed a billboard that gave you the idea for the invention, unless the sign was one of those plot points in the screenplay that this invention idea was probably most likely in anyway, and now that you had some coffee, this possibly came from the nap you took on Saturday, which would make sense, since you're pretty sure the note you emailed to yourself was in that dream with the angry sidewalks, because it's not in your in box, and there is a bunch of overripe bananas in the kitchen on the spot where you are pretty sure you left the reminder to yourself to check.

You are one of those people who becomes seized by bouts of obsessive regret for all the mistakes you have committed, all the inexplicably stupid decisions and senseless lapses of judgment, and you wish you could go back in time and slap yourself on the back of the head like in one of those movies with Michael J. Fox or Michal Keaton or Skeet Ulrich. This app allows you to download all of your regrets, woulda-shoulda-couldas and failures of courage into one encrypted digital file that will be condensed into a beam of pure negative energy that will be fired from an industrial laser out into the atmosphere, where its ions and protons and whatayacallits will dissipate and rain down onto the surface of the planet, subatomically snowing onto unsuspecting strangers and soybean farms and people not wearing hats, whereupon it will be absorbed into the collective unconscious, or chi, or kundalini, where you are unlikely to see it or feel it ever again, thus finally setting you free, at least until the next time you miss your kid's birthday party because you thought it was tomorrow, or you can't find your keys, or Passover. Or the other kid.