End to Japan nuke crisis is years, a fortune away 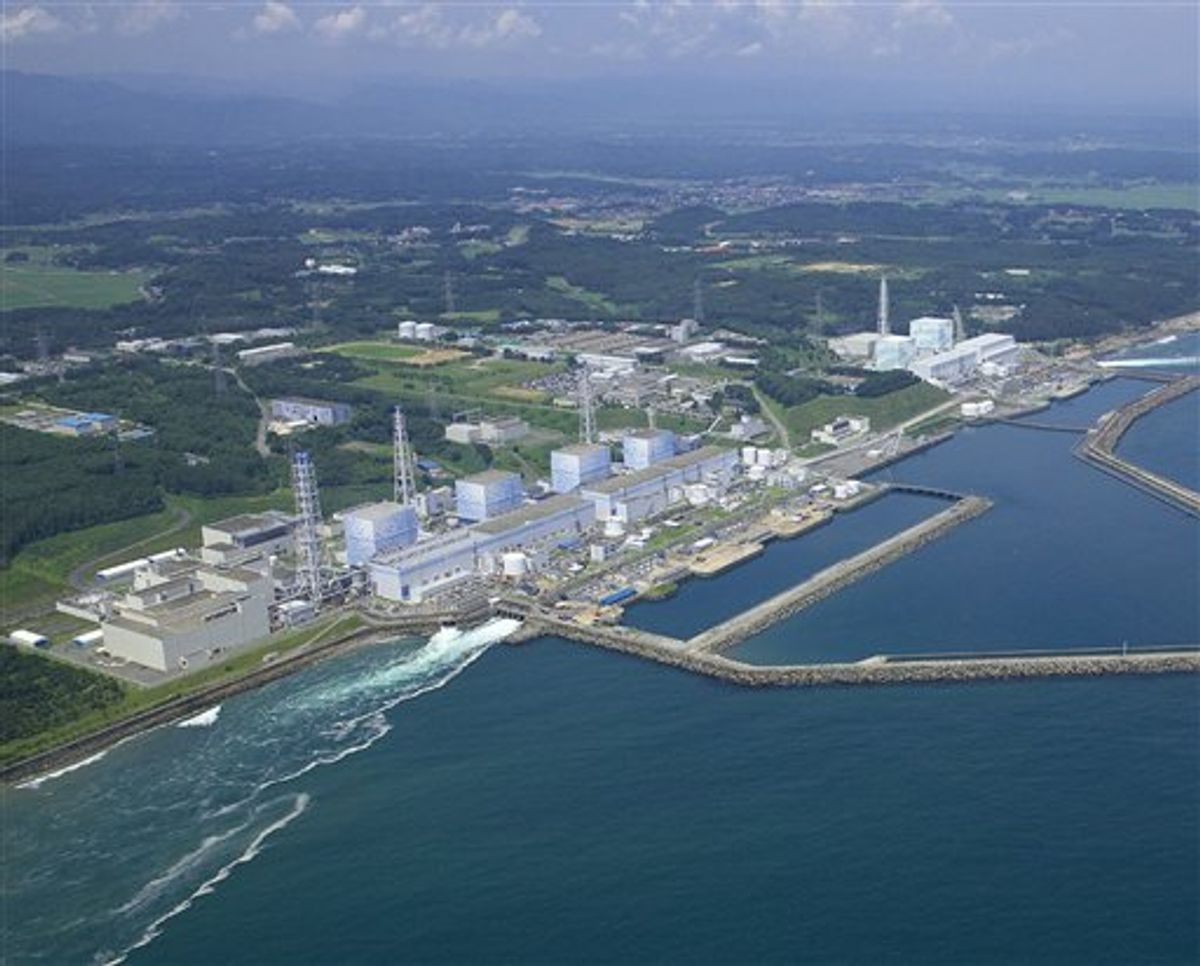 FILE - In this undated file photo released by Tokyo Electric Power Co., the Fukushima Daiichi Nuclear Power Plant reactors stand in line intact in Okuma town in Fukushima Prefecture, northeastern Japan. Radiation has covered the area around the Fukushima Dai-ichi plant and blanketed parts of the complex, making the job of rendering the plant safe so that it doesn't threaten public health and the environment, or "decommissioning", a bigger task than usual. (AP Photo/Tokyo Electric Power Co.,File) (AP)
--

Once Japan's leaky nuclear complex stops spewing radiation and its reactors cool down, making the site safe and removing the ruined equipment is going to be a messy ordeal that could take decades and cost hundreds of millions of dollars.

Radiation has covered the area around the Fukushima Dai-ichi plant and blanketed parts of the complex, making the job of "decommissioning" the plant -- rendering it safe so it doesn't threaten public health and the environment -- a bigger task than usual.

Toshiba Corp., which supplied four of Fukushima's six reactors, including two on which General Electric Co. collaborated, submitted a roadmap this past week to the plant's operator for decommissioning the crippled reactors. The study, done with three other companies, projects that it would take about 10 years to remove the fuel rods and the reactors and contain other radioactivity at the site, said Keisuke Omori of Toshiba.

That timeline is far faster than those for other nuclear accidents and contains a big caveat: The reactors must first be stabilized and cooled, goals that have eluded emergency teams struggling with cascading problems in the month since the devastating tsunami damaged their cooling systems. Omori said the extent of damage to the reactors and other problems still need to be assessed.

"Of course decommissioning the four reactors would be more challenging than retiring one from an ordinary operation. We still have a lot to examine," Omori said. He declined to provide details on the costs and the timeframe, citing business confidentiality.

Getting a quick resolution to the Fukushima crisis would give a boost to a nation trying to recover from the severe disasters and to the tens of thousands forced to evacuate communities near the plant and already wearying of living in shelters with no prospects of returning home.

"It could take decades. We will all have to move away," said 36-year-old Hitomi Motouchi, who left a home on the fringe of the evacuation zone and is living in a gymnasium in Fukushima city. Unlike the tsunami refugees who may return to rebuilt communities, "it's different for us, because this disaster may never end," Motouchi said.

Decommissioning usually takes three forms: dismantling or decontaminating parts of the reactors so the land can be used; safely sealing off and monitoring the nuclear plant while the radiation inside decays; and entombing radioactive parts in concrete and steel.

With so much radiation spread about, experts said a combination of these is likely to be used at Fukushima. Once the reactors cool, heavily contaminated areas could be entombed by pouring concrete on top and tunneling underneath to insert a slab to prevent seepage. Other tainted areas could be locked down. That would allow the radiation to decay naturally but put on hold usual tasks like dismantling parts of the complex.

"The best solution is to entomb the site for 40, 50, 60 years," said Arnold Gundersen, who wrote part of the Energy Department manual on decommissioning and runs the U.S.-based environmental consulting company Fairewinds Associates.

A Fairewinds study cited cost estimates for decommissioning the Vermont Yankee nuclear plant, whose boiling water reactors are similar to Fukushima's but have fewer problems, that ran as high as $950 million last year and would likely exceed $1 billion next year. Gundersen said the tab for the Japanese plant may end up being many times that amount.

Hidehiko Nishiyama, chief spokesman for Japan's Nuclear and Industrial Safety Agency, has said ideally the Fukushima complex eventually will be returned to "flat land," meaning the facility is dismantled and removed.

Though an avid user of nuclear power with 54 plants, Japan has little experience in decommissioning and none involving problematic reactors. The first, the Tokai Power Station's No. 1 reactor, is 13 years into a 22-year process. Its fuel rods have been removed, and its turbines and other equipment are being dismantled while the reactor is isolated, its vents and ducts closed.

Decommissioning troubled reactors tends to be more drawn-out. Parts of Ukraine are still uninhabitable 25 years after the Chernobyl nuclear plant's No. 4 reactor exploded, while neighboring Belarus began allowing some people to move into its no-go zone last year.

The dun-colored cooling tower and rounded dome of the Three Mile Island nuclear plant's Unit 2 still loom over central Pennsylvania 32 years after its cooling system malfunctioned, causing a partial meltdown and sending up plumes of radioactive gas. Its final decommission date is two decades away at a cost, as estimated by the U.S. nuclear regulatory agency, of over $850 million.

"It's like a funeral where the pallbearers have to stand around for decades," said Eric Epstein, who runs the monitoring group TMI Alert. The region was long known for plain-living Amish farmers, the Hershey Co. chocolate factory and the Civil War battlefield of Gettysburg, he said, but is now stigmatized in the public mind by the United States' worst nuclear accident.

Unlike Three Mile Island and Chernobyl, where problems were confined to one reactor each, Fukushima has three active reactors that are not cooling properly and at least one of which may be leaking, and four storage pools for spent fuel which have overheated, some to dangerous levels.

"This is going to be inevitably a much more challenging decommissioning than we have experience with," said Peter Bradford, a former commissioner on the Nuclear Regulatory Commission.

Explosions in the first few days of the crisis at Fukushima showered debris over the site and highly radioactive water has inundated trenches, tunnels and ducts not normally exposed to radiation. Plutonium, which lingers for decades and may cause cancers at high levels of exposure, has been found on site and other highly radioactive elements like cobalt are likely there.

Cesium-137, another long-lingerer linked to cancer, has been detected 15 to 35 miles (25 to 60 kilometers) away from the plant in amounts the scientific journal Nature said this past week suggests that the areas may not be fit for food production for decades, as was the case with Chernobyl.

Once the extent of contamination is known, the Japanese government may have to decide whether a faster expensive cleanup -- that is, one undertaken before much radiation decays -- is feasible or preferable to sealing off wide areas to let the radiation decay, as was done in Chernobyl.

Another speedy solution suggested by some experts is to pour concrete or sand over the overheated reactors, not waiting until they cool. The tactic has been dismissed by Japan's nuclear safety agency and other experts have called it risky as the nuclear fuel may melt through the container.

The Toshiba plan -- developed with its Westinghouse Electric Co. unit, the energy company Babcock & Wilcox Co. and the Shaw Group, which specializes in civil engineering -- was worked on by 100 specialists and looks at Three Mile Island for lessons, said Omori, the company spokesman.

It predicts that the reactors will be stabilized in several months and envisions moving ahead on multiple tasks simultaneously. Fuel removal could begin late this year while radioactive debris would be cleared and less contaminated equipment outside the reactors demolished, Omori said.

That's a faster timetable than Three Mile Island, where fuel removal began six years after the accident and took another six years to complete.

Whatever the method, Fukushima's four problematic units, 1, 2, 3 and 4, will be scrapped. But a final decommissioning may depend on whether the operator, Tokyo Electric Power Co., keeps Units 5 and 6 running. At Three Mile Island, nuclear fuel from the damaged Unit 2 reactor has been shipped to Idaho and contaminated water has evaporated. But it cannot be fully dismantled and decommissioned until after its adjacent Unit 1 is shut down in 2034.

Hutzler reported from Beijing. Associated Press writers Eric Talmadge in Fukushima and Ryan Nakashima and Mayumi Saito in Tokyo contributed to this report.