Was he bluffing the whole time?

If John Boehner had played the shutdown drama any differently, he might now be another victim of the Tea Party 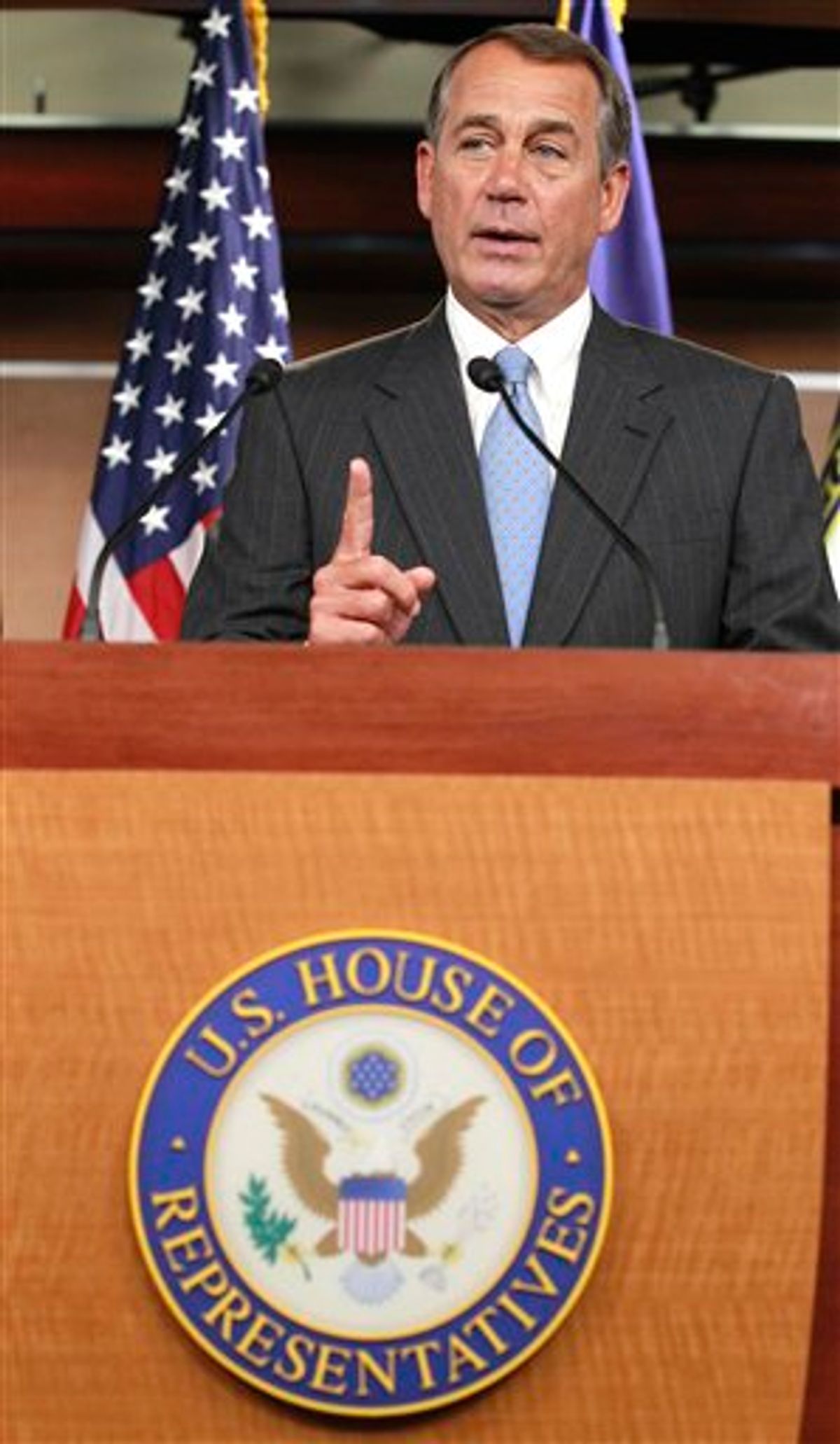 Let's be clear: It was never in the political interests of House Republicans to force a government shutdown over this -- and John Boehner, who was a member of his party's leadership when the GOP suffered a P.R. disaster during the shutdowns of late 1995 and early 1996, knew it.

But the House Speaker also knew that the best way to keep his fellow Republicans from insisting on one -- and, potentially, from throwing him overboard in the process -- was to extend the negotiations as long as possible, making it look like he was as hell-bent on confrontation with President Obama as they were, and to hope that influential conservatives would eventually give him cover to cut a deal.

That seems to be what finally happened late on Friday night, just over an hour before funding for the government was set to expire and mass furloughs were set to begin. Instead of a shutdown, Boehner, Obama and Senate Democratic leader Harry Reid agreed to one more stop-gap budget measure -- the seventh of this fiscal year -- that will keep the government in business until next Thursday, when (barring any glitches) a bill covering the last six months of the fiscal year will finally be approved.

Walking away from the table and forcing a shutdown made no sense for the GOP for two reasons.

First was the obvious P.R. consideration: The results were devastating the last time they played this game, under President Clinton back in '95 and early '96. And while the circumstances are different today (the differences between the two parties' demands were far greater back then), the signs were again ominous, with Democrats using the pre-deadline hours to claim that Republicans were ready to close the government -- and risk the fragile economic recovery! -- simply because their demands on abortion and other cultural issues weren't being met.

And why pay such a hellish P.R. price when so little, substantively speaking, was at stake? By all accounts, Democrats and Republicans were no more than $6 billion apart this week on the overall amount of spending to cut. That may sound like a lot, but it accounts for about one-sixth of one percent of the entire federal budget. And then there were the riders -- Tea Party-friendly amendments designed to neuter Planned Parenthood, the EPA, NPR, the new healthcare reform law and some of the right's other favorite targets. Mostly, they were significant only for their symbolism; federal money that goes to Planned Parenthood, for instance, already can't be used to pay for abortions, per the longstanding Hyde Amendment.

But Boehner was in a tough spot. If he told all of this to his fellow Republicans early in the process and then tried to make a deal with Obama, the risk of an intraparty mutiny would be high. Dozens of House Republicans owe their seats to the Tea Party movement. Many are themselves Tea Partiers. And many more simply fear the Tea Party (which is essentially a euphemism for "Republican Party base"), whose members showed last year that they are willing and able to defeat "sell-out" GOP incumbents in primaries, no matter how entrenched they might be. Tea Partiers -- unlike just about every other bloc of voters -- were itching for a shutdown, convinced that it was long past time for Capitol Hill Republicans to take a defiant, principled stand on federal spending. So if he was perceived as rushing into a compromise, Boehner would surely face fierce and vocal resistance from Tea Party-aligned House Republicans. Add in the fact that the No. 2 House Republican, Eric Cantor, has little regard for Boehner and stronger credibility with the Tea Party and, well, you can see why Boehner couldn't just impose a deal on his fellow Republicans.

So all week, even as the external pressure mounted, Boehner resisted saying "yes" to Obama and the Democrats, proudly reporting back to the GOP conference after every negotiating session that there was no deal -- and winning cheers for it. It surely didn't help that Democrats picked up on his dilemma, mischievously praising the Speaker in public for his willingness to work with them -- and lamenting that the "extreme" Tea Party was keeping him from cutting the deal he wanted to make. Boehner responded by publicly insisting that there was "no daylight" between him and the Tea Partiers -- a declaration that pleased Democrats, with polls showing the Tea Party movements negative numbers soaring to new heights.

Finally, two things happened that freed Boehner to make a deal. First was the Wednesday unveiling by Rep. Paul Ryan, the House GOP's go-to guy on fiscal matters, of a radical budget plan for next year. Even some Republicans thought the timing was bizarre: Why roll out a controversial proposal for next year's budget -- one that features steep domestic spending cuts and calls for turning Medicare into a voucher program -- when the debate over this year's is just coming to a head? Actually, it made perfect sense. While Democrats heaped scorn on the Ryan budget, Boehner was able to offer it as proof to Tea Party conservatives that giving ground now wouldn't be a surrender. The message, in effect, was this: Sure, let's have a big fight with Obama -- but let's do it over something that really matters, and not a few billion dollars and Planned Parenthood funding. There were also pragmatic warnings, like Karl Rove's Friday statement that Republicans risked enhancing Obama's image as a tough-minded leader if they went forward with a shutdown.

This was enough to convince several prominent conservatives to speak up on Friday, with the deadline just hours away, and to urge that a deal be cut. In a RedState post, Rep. Michele Bachmann argued that the stakes of this week's fight just weren't "big enough," suggesting that it would be better to wait for the debate over Ryan's budget to make a grand stand. Rep. Chris Smith, a New Jersey Republican whose pet issue is abortion, indicated that he didn't believe the government should shut down over the Planned Parenthood rider. Mike Huckabee, who holds no office but remains influential on the right, made a similar argument.

Suddenly, Boehner didn't need to beg his colleagues to go along with a compromise. They were deciding for themselves that it was the best thing to do right now. Only then was Boehner able to extract a few billion more in concessions from the White House, take the poisonous riders off the table, and return to his fellow Republicans to declare -- 90 minutes before the shutdown was to begin -- that he'd struck a deal. There was no mutiny.