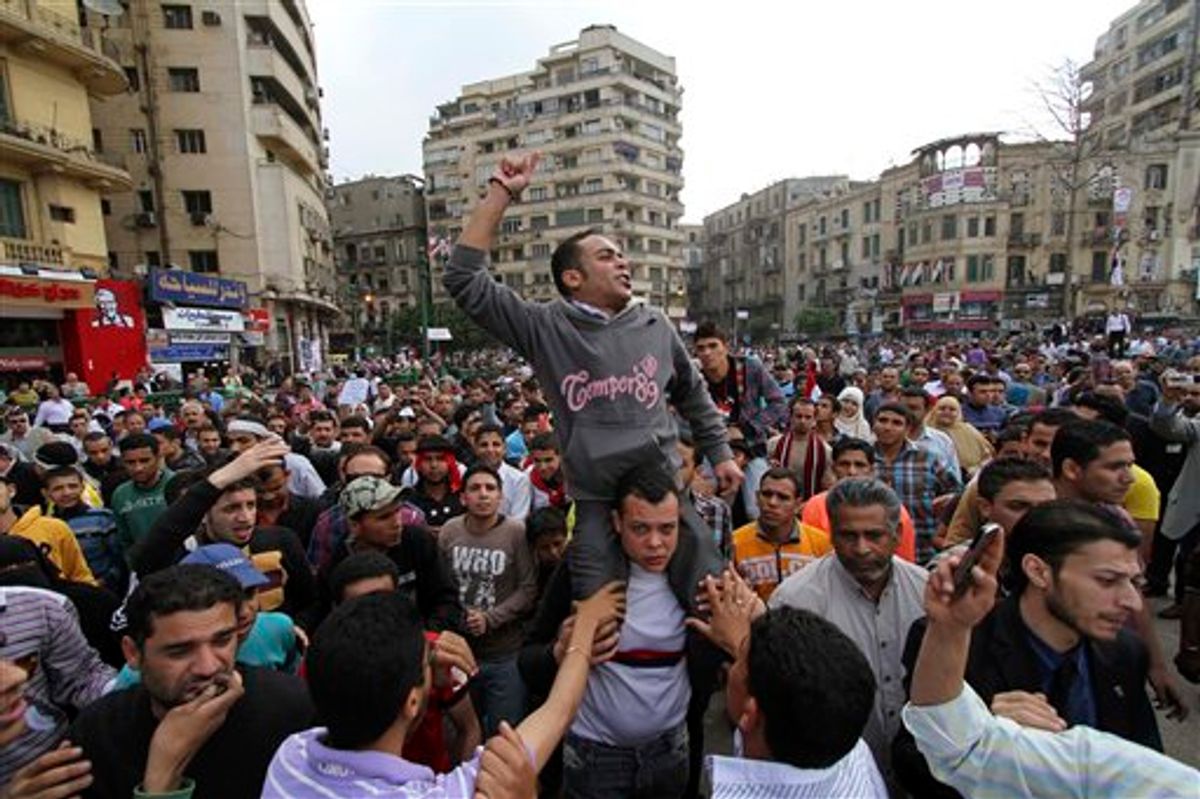 Protesters chant slogans as they march following an attack by security forces in Tahrir Square, in Cairo, Egypt, Saturday, April 9, 2011. Demonstrators burned cars and barricaded themselves with barbed wire inside a central Cairo square demanding the resignation of the military's head after troops violently dispersed an overnight protest killing one and injuring scores. (AP Photo/Khalil Hamra) (AP)
--

Demonstrators burned cars and barricaded themselves with barbed wire in Cairo's central Tahrir Square, demanding the resignation of the military's chief Saturday hours after troops violently dispersed a protest there, killing at least one and injuring 71.

In the pre-dawn raid on the square, hundreds of soldiers beat protesters with clubs and fired into the air in the square, highlighting the rising tensions between protesters and the military leaders whom they praised in Tahrir two months ago when President Hosni Mubarak fell from power.

Several thousand protesters, some armed with sticks and other makeshift weapons, had moved back into the square by Saturday afternoon. They vowed not to leave until the defense minister, Field Marshal Mohammed Hussein Tantawi, resigns. Tantawi, a Mubarak appointee, leads the Supreme Council of the Armed Forces, which rules Egypt now and is made up of the military's top generals.

The confrontation could mark a key juncture in Egypt's upheaval. For weeks, protest leaders have been critical of the military's handling of the post-Mubarak transition and sought to pressure it to change, but both sides also worked to stay on good terms. Now the overnight clashes resembled the ugliest moments of the 18-day protest movement against Mubarak -- with authorities cracking down violence and protesters chanting for the leader's removal.

Soldiers backed with a line of armored vehicles swept into the square around 3 a.m., firing continual barrages into the air with automatic weapons to intimidate protesters camped out in the center of Tahrir. The troops waded into the tent camp, where protesters had formed a human cordon to protect several army officers who had joined their demonstration in defiance of their superiors.

Witnesses reported two killed. Ali Mustafa, a car mechanic who was guarding the "free soldiers" tent, said he saw an attacking soldier stab one of the officers to death with his bayonet. He pointed to a section of pavement stained with blood under a small pile of garbage and food remains.

Another protester was shot dead, said Ahmed Gamal, who was there overnight and said he helped carry away the body. He added that he saw at least two others severely injured by live ammunition. The deaths could not be confirmed.

The Health Ministry issued a statement saying only one person was killed and 71 wounded, some of them with gunshot wounds, including three in critical condition.

Witnesses said the troops beat protesters with batons, fists and kicks and dragged an unknown number of protesters away and threw them into police trucks. Near the famed Egyptian Museum, which overlooks the square, protesters trying to flee were blocked by soldiers, who hit them and knocked them. "I saw them detain a bunch at the museum. They were beating some pretty badly," said one protester, Loai Nagati.

As the sun came up Saturday morning, black smoke rose as protesters set fire to three vehicles in the square, including two troop carriers. The square was filled with shattered glass, stones and debris in a scene reminiscent of the protests that brought down Mubarak on Jan. 11. The glass storefront of a KFC on the square was also smashed.

"We are staging a sit-in until the field marshal is prosecuted," said Anas Esmat, a 22-year-old university student in Tahrir as protesters dragged debris and barbed wire to seal off the streets leading into the square.

"The people want the fall of the field marshal," chanted protesters, in a variation on the chant that has become famous in protests across the Middle East. "Tantawi is Mubarak and Mubarak is Tantawi," went another chant.

One of the "free soldiers" who were inside the tent cordoned by the protesters read a statement that was also posted on the officers' Facebook page. He did not identify himself but said that his group decided to stay with the protesters at Tahrir until the Supreme Council is dissolved, its members are prosecuted and Tantawi is sacked.

They also demand the creation of a new presidential council to lead the country, trials for those behind the killings of protesters since Jan. 25 uprising, and speeding up prosecution of "heads of the corruption starting with the ousted president Hosni Mubarak and his family."

The military blamed "outlaws" for rioting and violating the country's 2 a.m. to 5 a.m. curfew.

"The armed forces stress that they will not tolerate any acts of rioting or any act that harms the interest of the country and the people," it said. The military's statement, issued before the Health Ministry's, said there had been no arrests or casualties in the raid.

Some backers of the protest movement on Saturday appeared to be trying to pull both sides back from the confrontation.

Democracy advocate Mohammed ElBaradei, whose supporters were among those who organized the anti-Mubarak wave of protests, said in a Twitter message, "enduring confidence between the people and the army is a red line which we have to preserve for the sake of the nation. Dialogue is the only alternative."

But he voiced demands similar to those of the Tahrir protesters and called for a "quick response to the demands of the revolution."

The fundamentalist Muslim Brotherhood, as well, condemned any effort to divide the people and the army, calling them "one hand." But it noted that "there are many people's demands that have not been met until now."

The confrontation was a sharp contrast to the warmth protesters expressed toward the military during and immediately following the 18-day wave of mass demonstrations that led to Mubarak's ouster. Many praised the military for refusing to fire on protesters, and welcomed the army's move to step in to rule.

But tensions have since grown. Reports have emerged of some protesters arrested and tortured by the military in past weeks. Many have complained that the military's handling of the transition to democracy has been too secretive, ignoring some demands, and too fast.

In particular, anger has also grown over the failure so far to prosecute Mubarak and his family over rampant corruption during their rule. Prosecutors have put on trial or started investigations against a string of former senior figures from Mubarak's regime on allegations of corruption, exploiting their positions to amass personal fortunes and other crimes.

But so far, there has been no move against Mubarak or his son Gamal, who had been widely seen as his choice as successor. Since his ouster, Mubarak and his family have been under house arrest at a presidential palace in the Red Sea resort of Sharm el-Sheikh, their assets frozen.

The overnight clashes came hours after tens of thousands massed in Tahrir Square on Friday in one of the biggest protests in weeks, demanding that the military prosecute Mubarak and his family. Many protesters accused the miiltary leadership of protecting Mubarak, a former military man himself. More than in previous protests, chants and banners Friday directly criticized the Supreme Council and Tantawi, a former Mubarak loyalist.

Frictions with the military began in the evening Friday. After nightfall, military police tried several times to move in and detain the officers who had joined the demonstration, but protesters pushed them back. At one point, protesters pushed and shoved an army general, tearing his cap from his head.

After the attack in the early hours of the morning, the scene was chaotic. Families who had camped out in the protest tent searched for children who got lost in the mayhem. Outside, protesters scuffled with soldiers on side streets, chanting, "Field Marshal, tell your soldiers, we aren't leaving."