The late director of "Dog Day Afternoon" and "Network" told stories that were tough, funny and ultimately human 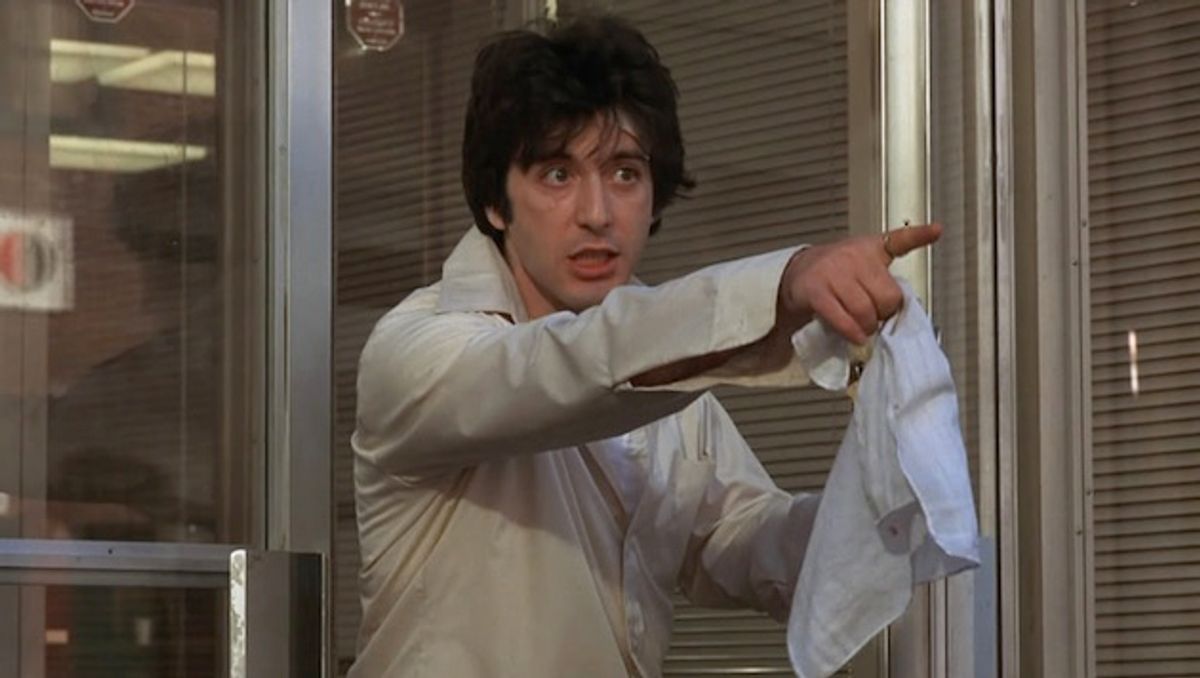 Sidney Lumet made movies for grownups. That's the first thing and the last thing that should be said about this great American director, who died of lymphoma Friday night at the ripe old age of 86.

His long list of great, good, and otherwise notable films focuses mainly on personal morality within the context of social institutions: police departments, courts, media empires, the American economy and government: "Dog Day Afternoon." "Serpico." "Network." "Prince of the City." "The Pawnbroker." "Twelve Angry Men." "Running on Empty." "The Group." "The Verdict." "The Fugitive Kind." "Fail Safe." He was interested in the here and now -- in how his fellow adults lived, loved and died, in boardrooms and courtrooms, in bedrooms, and on the streets. Escapism is one of the great, primal lures of moviegoing, but cinema also exists to confront and engage. That was Lumet's preference, and he continued to indulge it long after Hollywood had retooled itself as a fun factory for teenagers; his gritty, detail-obsessed legal series "100 Centre Street" premiered on cable when he was 75, and his last movie, the coal-black, greed-infected domestic drama "Before the Devil Knows You're Dead," came out in 2007, when he was 82. He never made a film about superheroes, extraterrestrials, or giant robots. He kept it real.

Lumet started his career directing live TV dramas, which were essentially theater that happened to be broadcast to tens of millions of people simultaneously. If you've ever seen any productions from that amazing, brief era -- which began in the early 50s and ended about 10 years later, when TV production moved to the West Coast and almost everything started being done on tape rather than live -- you can see where Lumet's aesthetic came from. Directing live television required a commitment to the text, the actors, the moment, the reality of what was happening right then.  You were essentially creating cinema in real-time, figuring out where the actors were going to be at any given moment in the story and making sure that one of several cameras was positioned not just to capture the action, but to showcase it in a dynamic and interesting way, a way that served the moment without overwhelming it.

Lumet carried that aesthetic over to his theatrical films, starting with his 1957 big-screen adaptation of Reginald Rose's live teleplay "12 Angry Men," set entirely in a jury room during a murder trial. We think of this as a talk-driven piece, and it is, but it's also subtly yet boldly visual. According to Lumet's memoir "Making Movies," the film's depth-of-field changes as the story unfolds, starting out with wide-angle lenses (which keep everyone in focus and give faces a slightly gargoyle-like aspect) and then gradually shifting to longer and longer lenses, which compress space and convey a sense of intimacy and isolation. This shift befits Rose's script, which starts out viewing the jurors as an unformed, anonymous mass, then gradually reveals them as complex, troubled, passionate, imperfect individuals.

And watch what Lumet does in this sequence from "Running on Empty," in which River Phoenix's character -- the son of political radicals who've been living underground for nearly two decades -- auditions for Julliard. Notice how Lumet starts the sequence with the camera very far back from everyone involved (conveying the distance between performer and audience at the start of the audition) then gradually moves closer and closer, through cuts, until both the perfomer and the listeners are in closeup.

This is the sort of directing most viewers might not notice the first time, if at all. But it has a subliminal effect on what we're feeling as we sit there in the dark. Many of Lumet's aesthetic choices were like that. He thought about the story from the inside out, letting text and performance dictate visuals, rather than superimposing meaning. It's not the only valid way to make a movie, but it's demanding and illuminating, and there are not as many rewards in it as there are in the shoot-the-camera-out-of-a-cannon type of directorial pyrotechnics. That's why, even though Lumet's films sometime became hits and won awards, they never gained much currency with auteurist critics. Just because you don't instantly notice what directors are doing doesn't mean they aren't doing anything.

Lumet was also a political filmmaker -- a committed liberal, obsessed with social justice (and injustice) and the ways in which the powerful conspired to oppress, exploit and distract the powerless, and the tendency of institutions to flout rules and laws they were supposed to uphold. But these subjects were always embedded in the stories themselves and carried by the characters and the narrative. The movies rarely became straightforward polemics because Lumet was always positioning the morality of his characters in relation to the world and showing where they diverged, and he was more likely to observe than to judge or sneer.

He made more than a few stinkers -- the depressingly un-fantastic film version of "The Wiz" is probably his low point, perhaps because it's the sort of movie Lumet was never good at or terribly interested in -- and in the last couple of decades of his life, "Before the Devil" notwithstanding, one could sense an ebb of energy and focus. Some of his later films play like inferior copies of his earlier classics; his last cop corruption thriller "Night Falls on Manhattan" was listless and redundant. And "A Stranger Among Us," "Guilty as Sin" and the remake of John Cassavetes' "Gloria" were flat-out terrible, disasters from which everyone involved was lucky to escape. But when you look back over the breadth of his career, the sheer number of memorable films is astonishing. Lumet was never less than a vital and important American filmmaker, fiercely committed to telling stories about people who might actually exist and things that could actually happen.

Lumet made three great movies about police corruption -- 1973's "Serpico," 1982's "Prince of the City," and 1990's neglected, magnificently scuzzy "Q & A" -- and broached the subject in other less successful movies (including 1997's "Night Falls on Manhattan"). His 1966 adaptation of Mary McCarthy's "The Group" was a more astute examination of modern American women's slippery, conflicted, volatile self-images on the cusp of the feminist revolution than almost anything that had been made in Hollywood up till then; the film also introduced a kinetic yet controlled way of shooting group conversations that hadn't been seen yet, slowly moving the camera around an ensemble while making sure the screen captured important lines or realizations as they occurred. To say Lumet's "Network," from a fire-and-brimstone script by Paddy Chayefsky, was prescient would be a gross understatement. It's not just the hilariously exaggerated portrait of network executives' greedy crassness that pops off the screen, it's the movie's furious and despairing portrait of mass media as a form of mind control that turns viewers into "motorized, transistorized sheep," "as replaceable as piston rods." Most chilling of all is the movie's position of Howard Beale (Peter Finch), the "mad prophet of the airwaves," as a mere player in the bread-and-circuses master plan of international corporations -- a means of letting the people blow off steam without directing their outrage toward substantive and lasting change. It's all about serving the bottom line, taking care of the Owners. As network president Arthur Jensen tells Beale,

You are an old man who thinks in terms of nations and peoples. There are no nations. There are no peoples. There are no Russians. There are no Arabs. There are no Third Worlds. There is no West. There is only one holistic system of systems, one vast and immane, interwoven, interacting, multivariate, multinational dominion of dollars! Petro-dollars, electro-dollars, multi-dollars, reichmarks, rins, rubles, pounds, and shekels! It is the international system of currency which determines the totality of life on this planet! That is the natural order of thiiiiiiiings today. That is the atomic and subatomic and galactic structure of thiiiiiiings today! And you have meddled with the primal forces of nature, and you... WILL... ATONE!

"The Fugitive Kind," Lumet's adaptation of Tennessee Williams'  "Orpheus Descending," is a peculiar, loving, smart portrait of outsiders within America -- Marlon Brando trading his rebel's snakeskin jacket for a suit and tie, Anna Magnani's Italian businesswoman fighting to be taken seriously in the redneck south. It's more like an American version of a mid-'60s European art film than anything Lumet directed, with the exception of 1964's searing "The Pawnbroker," one of his masterworks -- a black-and-white drama about a Holocaust survivor (Rod Steiger) plagued by nightmarish flashbacks to his wartime experience. The latter is one of the most important American films of the 1960s -- not just for its complex, pained view of racism, urban unrest and liberal guilt (Steiger's Sol Nazerman finds the poor African-Americans around him unnerving and scary even as his mind sees them as America's equivalent of persecuted European Jews), but also for its unstinting commitment to physical reality (most of the movie was shot on the streets of New York, sometimes without permits), and its jagged, intuitive cutting style.

Lumet and his editor on "The Pawnbroker," Ralph Rosenblum, imported French New Wave editing techniques, skipping back and forth between past and present with hard cuts rather than the usual "Now we're going back in time!" dissolves that were once the norm. Portions of this film have the eerie transporting power of "Hiroshima, Mon Amour," the film that perfected this kind of cutting. Again, the filmmaking feels internal, subjective; the form of the movie is dictated by its focus on Sol Nazerman's emotions and psychology, and the most powerful parts of it feel almost first-person -- as the hero's mind is reaching out, wresting the film away from Lumet and shattering it into pieces.

If I had to choose a personal favorite, though, it would be 1975's "Dog Day Afternoon," a dramatization of a real-life bank robbery. It showcases one of Al Pacino's funniest, most touching performances, and it brings many of Lumet's fascinations together: psychology, group dynamics, the relationship between individuals and society, and institutions and communities, with a little media satire thrown in. (I love the deliveryman bringing a pizza to Pacino's character, Sonny, then telling the crowd and the cameras, "I'm a fuckin' star!") It also politicizes everyday life in ways that modern films wouldn't dare do. The sequence where Sonny riles up the crowd against the cops and FBI by invoking the bloody Attica riots is one of the great populist rabble-rousing scenes in American motion pictures. Equally good is the opening of the movie, a wordless, nearly four-minute mini-documentary set to Elton John's "Amoreena" that situates the amazing story we're about to see within the context of daily existence in a big city. A line from John's song reminds me of the tough, tender sense of life communicated in Lumet's movies: "Living/Like a lusty flower."