My broken marriage in a shoebox

Nine years ago, my husband and I filed for divorce, but I still hang on to these few pieces of our life together 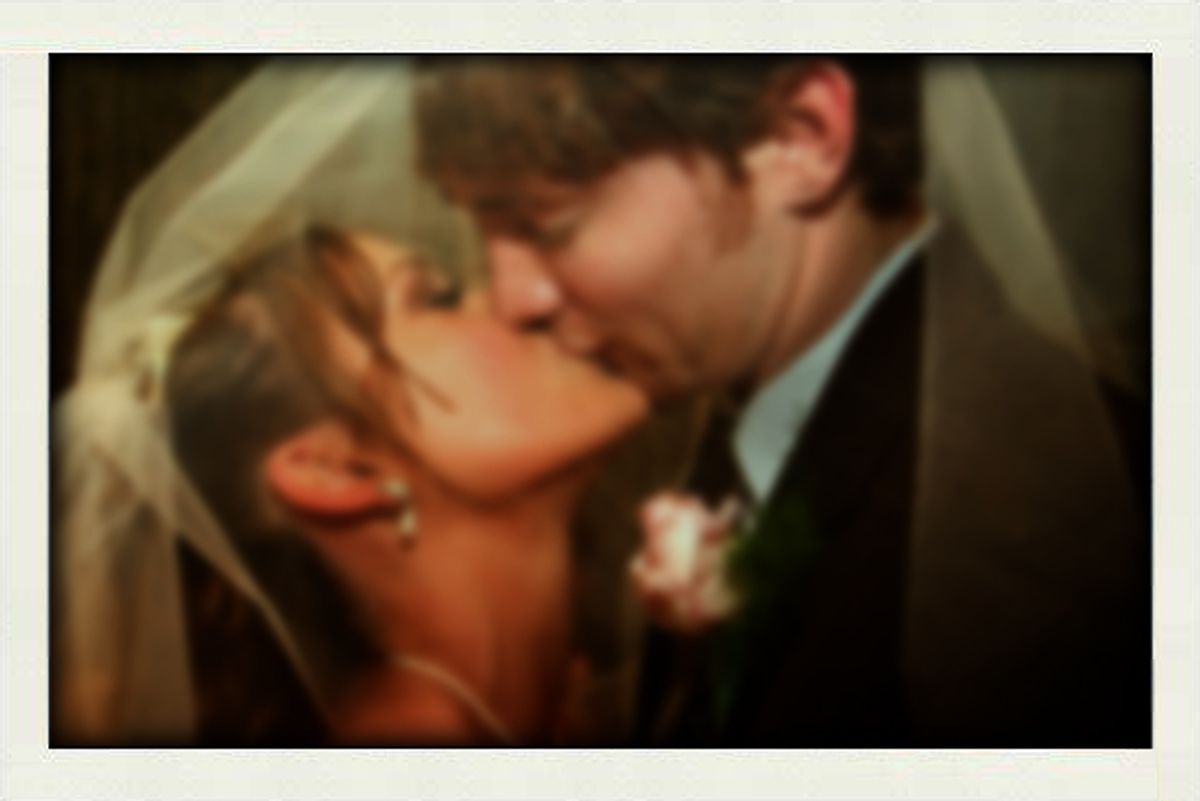 Outside the courthouse, signed divorce papers in hand after a yearlong custody battle and proceedings that left me in financial ruins, Larry, my new ex-husband, asked a stranger to take our photo. I was shocked, and though I hated him for what he had put me through, for some reason I stood still as he put his arm around my shoulder like a football buddy. It was raining; I wore a blue cashmere sweater. A woman with maroon lipstick snapped a shot of us on the courthouse steps.

That we could stand together even for a moment was miraculous, given the lawyers and the lies. Given Exhibit A of the property settlement agreement, an Excel spreadsheet detailing what was his and what was mine. And Exhibit B, the visitation schedule for our three children, age 1, 4 and 5 at the time.

That was nine years ago. I think of that photo as I pluck items from the memory trunk I keep in my office. I wonder how we might have looked, in those moments after the divorce, when our life was a drizzle, and the rain fell like so much broken glass. I wonder if Larry still has the snapshot -- and why he ever asked someone to take a picture in the first place. Maybe that was closure for him, a seam on the day once the camera clicked.

The man I married and had three children with is minimized to a shoebox inside my memory trunk now. There's a photo of us with the ship captain on our cruise to Portofino. A photo from our December wedding, all those poinsettias. And the card Larry gave me for our first anniversary. "Love you forever," he wrote on the popup heart; I bend it back into the box.

Why do I keep this, I wonder? Perhaps I want my children to have access to items that prove their father and I loved each other. I imagine Sophia, our oldest daughter, 13 now, finding this note I wrote to Larry after I became pregnant with her. Maybe these sealed mementos will supplement the images she must have of her father and me dropping her off at one house or another, or standing like stick figures at her back-to-school nights.

What's left from my first marriage, in addition to the children, is what's in this box. That's why I can't throw any of it away. It's proof to me, too, that I was married to my first husband for eight years, and there was some good in it.

The other day, I ran into Larry at our local Starbucks. I was in front of him in line. "Buy you a soy latte?" I said, surprising myself by making the offer, and still knowing what he drinks. Though we communicate weekly about the kids via email, I hadn't actually seen him for months; I studied him. His dark hair had thinned and he'd grown sideburns flecked with gray. I tripped on my oversize umbrella. "Lot of rain lately," he said. "A lot," I agreed.

We sat for five minutes even though the kids weren't there and we didn't have to pretend. "Sophia's a teenager now," I said, awkward. "She is," he said. "Olivia starts lacrosse next week," I said. I went on like this, though I wanted to ask how he was, really. I was remarried, but he was not. Did he have someone?

Looking at him, I thought how hard it had been all these years, living five miles away from each other but rarely speaking, trying to raise three happy children from two very different vantage points. When we were married, in my mind, he was not an involved father -- but now I thought how he had become one, different from the one I expected, but a father, for sure. I probably should have told him that. But instead I asked where he got his umbrella. "I like the color," I said, though it was plain gray.

Wrapping my hands around the paper cup, I wondered what someone looking through the window might see, if it was somehow obvious that we were a couple who were married once, who had three children together. I wondered what would happen if I asked someone to take our photo now, how it might compare to the divorce photo on the courthouse steps. Would we scoot our chairs together and smile -- and feel it this time, nine divorced years behind us? Would the lines in our faces be harder from the years, or less so since we live apart?

I come back to our flat conversation, stay inside safe words, afraid to trigger any of our hot issues. "Well, I have to go to Stop & Shop," I say. Larry makes an excuse to leave as well. We walk to our separate cars, the rain falling, the puce sky the color of bruises, mending.