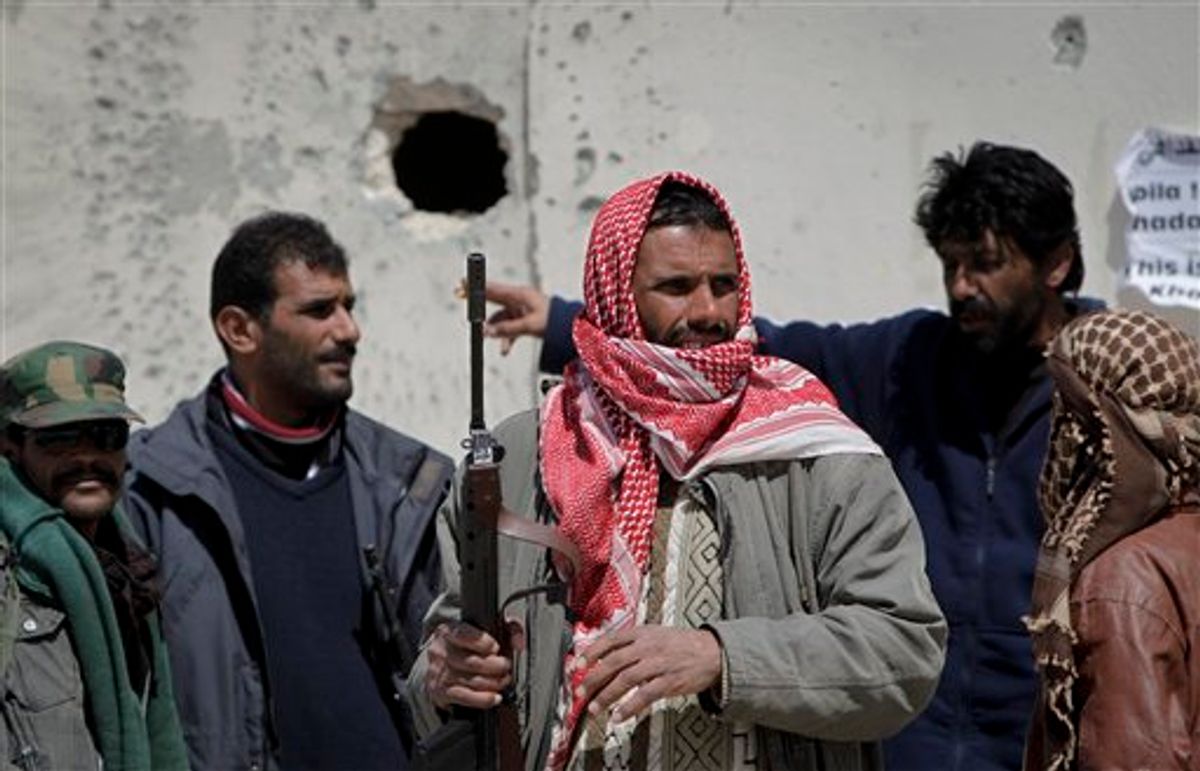 Libyan rebels look towards black smoke rising above the city amidst the sound of shelling, in Ajdabiya, Libya Sunday, April 10, 2011. Libyan rebels said NATO airstrikes on Sunday helped them drive Moammar Gadhafi's forces out of the hard-fought eastern city of Ajdabiya that is the gateway to the opposition's stronghold. (AP Photo/Ben Curtis) (AP)
--

Libyan opposition supporters protested Monday against a delegation of African leaders who arrived in the rebel stronghold of Benghazi to try to broker a cease-fire with Moammar Gadhafi's regime, saying there can be no peace until the longtime leader gives up power.

More than 1,000 demonstrators waved pre-Gadhafi flags that have come to symbolize the rebel movement and chanted slogans against Gadhafi outside a Benghazi hotel. They said they had little faith in the visiting African Union mediators, most of them allies of Gadhafi who are preaching democracy for Libya but don't practice it at home

The African negotiators met with Gadhafi late Sunday in the capital Tripoli and said he accepted their proposal for a cease-fire. However, an Algerian representative of the delegation was vague on whether the proposal includes a demand for Gadhafi to give up power and would only say that the option was discussed.

The protesters in Benghazi and the opposition leadership based in the city are demanding that Gadhafi step down immediately.

"On the issue of Gadhafi and his sons, there is no negotiation," said Ahmed al-Adbor, a member of the opposition's transitional ruling council

"The sons and the family of Gadhafi cannot participate in the political future of Libya," he said.

After the talks with Gadhafi late Sunday, the AU delegation said he accepted their "road map" for a cease-fire. The meeting came hours after NATO airstrikes battered Gadhafi's tanks, helping the rebels push back government troops who had been advancing toward Benghazi on an east-west highway along the country's northern Mediterranean coast.

The AU's draft calls for an immediate cease-fire, cooperation in opening channels for humanitarian aid and the start of a dialogue between rebels and the government. AU officials, however, made no mention of any requirement for Gadhafi to pull his troops out of cities as rebels have demanded.

"We have completed our mission with the brother leader, and the brother leader's delegation has accepted the road map as presented by us," South African President Jacob Zuma said Sunday. He traveled to Tripoli with the heads of Mali and Mauritania to meet with Gadhafi, whose more than 40-year rule has been threatened by the uprising that began nearly two months ago.

Zuma called on NATO to end airstrikes to "give the cease-fire a chance."