What movies get wrong about childbirth 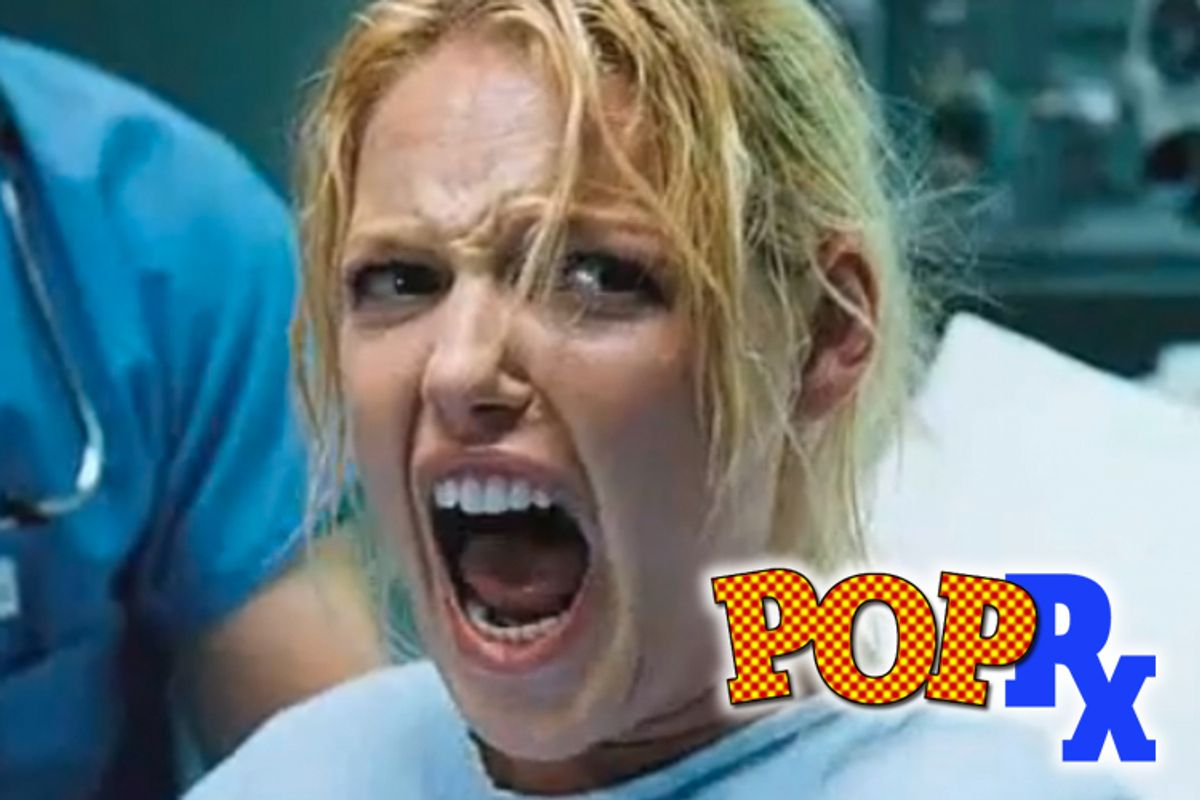 Katherine Heigl in "Knocked Up"
--

Of all the medical myths perpetrated by TV and film, giving birth ranks near the top. Take this scene from "Knocked Up" (parental guidance seriously suggested), in which the delivery of a child looks more like an exorcism.

Those of us who have been through a delivery, either as a parent or as a doctor, know scenes like these (or these) are gross caricatures. The goal of childbirth isn't to scream at the top of your lungs. Rather, it's to focus that energy down on the pelvis to push the baby out, instead of wasting it contorting your body and castigating your partner.

Despite this, a quick scan of maternal message boards shows there is no shortage of women with questions about whether all that screaming, cursing and writhing is normal.

It's not. What that fictional mama drama is meant to communicate is the excruciating pain women experience with labor. As a third-year medical student, I had a professor who put labor into perspective for men like this: "Imagine having to defecate a 7-pound pineapple -- spiky skin and leaves intact." I suspect that, for many new moms, even that grossly underestimates the reality of pushing out a baby.

Pain, and how much of it a woman should bear during delivery, has long been a point of discussion and controversy. The eternal question is: To what extent is pain a normal -- perhaps even essential -- part of having a baby?

In America, most women just say no to pain with epidural anesthesia. An anesthesiologist (or nurse anesthetist) pops a needle into a woman's lower back and attaches a catheter. Once all that gear is secured, it's hooked up to a pump that dispenses anesthetic into the nerves of the low back and pelvis whenever she presses a little button, delivering relief like sips of fresh iced tea on a hot summer day.

Four million women give birth a year in the United States. At last count, about two-thirds of those women used epidurals. Before they became widely available during the 1980s, epidurals were preceded by other options, best documented by Tina Cassidy in her terrific book "Birth." They included knocking women out with ether during the 1800s and, during a good portion of the last century, injecting women with a combination of scopalamine and morphine to induce "twilight sleep," basically a state of amnesia, which made a woman forget the pain she experienced during her delivery. Instead, she came back to reality with a newborn in her arms. "Mad Men" viewers saw twilight sleep dramatized when Betty Draper gave birth during season three.

Non-pharmacologic methods to treat labor pain have included massage, hypnosis, acupuncture and even injecting saline water into the skin of the low back. With the exception of the saline injections and massage, experts have yet to find enough evidence to support these methods.

Drugs or not, pain relief has always had a strong coterie of critics. Chief among them has been religion. Cassidy points out Genesis 3:16 in her book. "God says to Eve 'I will greatly multiply thy sorrow and thy conception; in sorrow thou shalt bring forth children.'" The interpretation by many a dogmatic priest has been that pain should be a part of labor. According to her book, some women have even been burned at the stake for trying to get relief.

Yet the very word "birth" comes from ancient Norse and doesn't just imply bringing a new life into the world. It also implies "to bear" or "to endure," terms of struggle and pain. While this is sure to raise the ire of more than a few 21st-century moms (including, perhaps, the lovely mother of my own two kids), there is a line of modern thinking that suggests pain is an important, even essential, part of birth. Several studies (including this one) have shown that the labor pain is fundamentally different from pain of disease or physical trauma, suggesting, perhaps, that there is higher purpose to it.

But just what that purpose is, or its significance, seems to depend heavily on where in the world you live. That is, research tells us how a woman perceives and responds to pain is culturally defined. In a 2004 study looking at the effects of culture on labor pain, a Muslim woman described her labor pain as being temporary and worthwhile, putting it this way: "There are no words to describe the pain you have to go through. All I wanted was for [the baby] to hurry up and come out. But you won't remember once it's over. That's why you give birth again." That mother had five children prior to that experience. Similar feelings -- of acceptance and even embrace of pain -- are shared by women all over the globe.

Does the pain of giving birth give meaning and a sense of accomplishment to women who endure it without analgesia? The answer may just be yes. "When empowered by their own attitudes and with the assistance of others, these women felt they met and mastered their birth experience," researchers from the same international study concluded. Meanwhile, women who had medicated childbirths seemed to have a lesser sense of their own role in bringing a baby into the world. "As long as I was awake, participating, and knowing what was going on, seeing her born and not having to experience the full pain, why not?" said one woman.

Here in America, surveys of women tell us that pain and pain relief do not generally play major roles in satisfaction with the childbirth experience, unless expectations regarding either are unmet. It's that part about expectations that seems to matter. Since our response to pain is culturally defined, scenes from movies like "Knocked Up" -- or "Rosemary's Baby" or "Now and Then" or "Nine Months" -- probably help set the cultural and psychic stage for excruciating pain, and help women decide well in advance of even getting pregnant to go for an epidural.

More important, we in medicine have ourselves to blame (or thank, depending on how you look at it) for our cultural perspectives on labor pain. There was a time when women birthed children at home, with the help of midwives, family and close friends. With the march of progress, birth became medicalized, the noble intent being to keep women and children safe and healthy through the process. Doctors are motivated to persuade women to eradicate pain for multiple reasons: We've never been taught or made any effort to discriminate birthing pain from any other kind, and don't want to see our patients suffer; pain is viewed now as a "vital sign" that, like blood pressure or pulse, has to be tightly controlled; managing pain medically requires less effort on the part of nurses and doctors (as Cassidy's book also points out) -- just sit back, jab the catheter in and wait, instead of coaching, breathing and other supportive measures, all of which have been shown to help women in labor manage pain better; last but never least, medicine is a business -- we can bill for the drugs, the needles, the catheters and all of the labor involved in keeping women pain free. (While the vast majority of women have hospital births, the rise of the doulas and the media attention to home-birthing suggests many people are actively searching for alternatives to this.)

Who's right and who's wrong? As a man, as a physician, and husband, I'm the wrong person to pass judgment. I watched my wife go through labor with both our kids. Each time, she waited to take an epidural, and each time, as the depth of her pain worsened, I felt ever more useless to do anything. Yes, I breathed with her and yes, I massaged her back and yes, I whispered words of encouragement into her ear. None of those things replaced the potency of the mighty epidural when it came to making her, and me, feel better about having a baby.

That's another reason scenes like the one in "Knocked Up" will likely never go away; they capture the sheer terror of having a child. Which, in its intensity, can only be matched by the joy.