Sorry, Obama, but budget cuts are not "historic"

A case can be made for the deal, but it's not the one the president is making. And next up, more GOP extortion 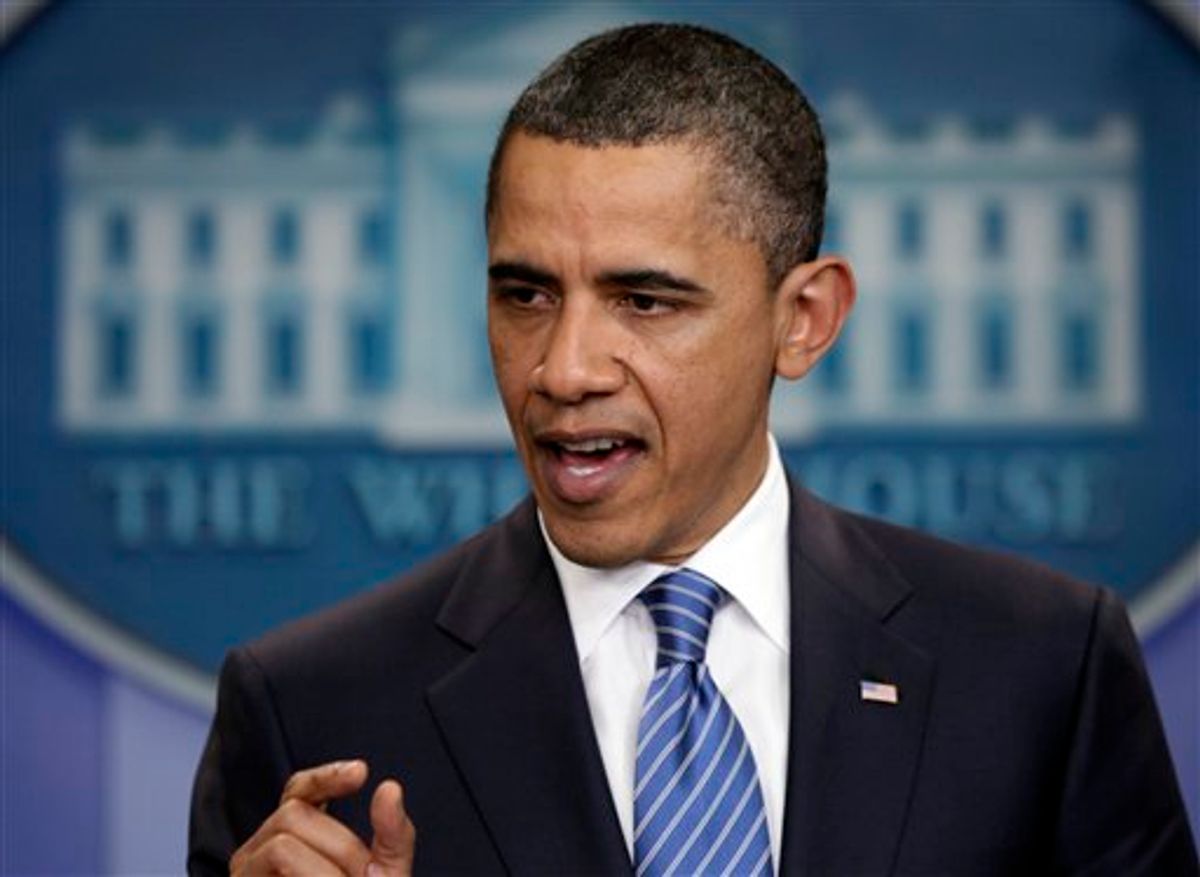 You can count me in with the group that finds it sickening to hear President Obama and Senate Majority Leader Harry Reid hail the budget deal reached this weekend as "historic" and "the largest annual spending cut in our history." A historic blunder, maybe, but certainly not a triumph. When unemployment is high and the economy is fragile, budget cuts are a mistake. The right prescription, in budgetary terms, for the current ailments of the United States, is a long-term plan for reining in health-care costs, on top of a short-term strategy of boosting demand via government spending. It might be a different story if the bond market were rebelling against government policy, forcing borrowing costs up, but that's not happening.

Does this mean, as a majority of the liberal punditocracy are declaring, that Obama "lost" the first round of the budget fight? From a purely economic standpoint, we don't know yet. The cuts will likely have some kind of dampening effect, but if the trendline of underlying economic growth is secure, it's possible that the U.S. will shake off these first tentative steps towards austerity. The specter of 1937, when Franklin Roosevelt short-circuited a nascent recovery from the Great Depression by turning too quickly to fiscal retrenchment, isn't a sure thing.

But it's a gamble, and we have to ask, what did Obama gain from taking this gamble? And judging that question requires a decision on how valuable we think the concessions that the Democrats did win are. Jonathan Bernstein, writing at A Plain Blog About Politics, declares that Democrats won a "significant victory" by pushing back against Republican policy riders -- "Republicans agreed to drop most of the provisions that Democrats objected to," he writes, "including defunding ACA, restricting the ability of EPA to regulate carbon emissions, and attacking Planned Parenthood."

We don't actually know yet exactly what's in the budget deal. But suppose just this much is true -- Democrats prevented Republicans from defunding healthcare reform and crippling the EPA's ability to crack down on greenhouse gas emissions. If you regard those things as important -- increasing healthcare coverage for Americans and combating the challenge of climate change -- then maybe it's OK to risk a short-term hit to the economy, or even the perception that you lost a game of government-shutdown chicken with the Republicans.

But if that's true, shouldn't the President be declaring that he saved healthcare reform from the Republicans rather than trying to take credit for budget cuts that he and his economic advisers know are a bad idea? Because even if you make the case that Democrats did salvage some kind of win by preventing Republicans from getting what they really, really want -- and make no mistake, I'm pretty sure the GOP would rather repeal healthcare reform than cut $40 billion from the budget -- this whole recently concluded drama is just the first skirmish in a long battle.

Next up is sure to be an even more bruising struggle over the debt ceiling. Two days ago, Speaker of the House John Boehner declared at a fundraiser that "I can tell you this: There will not be an increase in the debt limit without something really, really big attached to it." If the budget proposal released last week by House Budget Committee chairman Paul Ryan is any indication, that could mean anything from privatizing Medicare to decimating Medicaid to a (suicidal) balanced-budget constitutional amendment.

Today, in a gesture universally regarded as coming far-too-late-to-the-party, President Obama announced that he would release his own long-term deficit reduction plan on Wednesday. Senior White House Adviser David Plouffe made the Sunday morning talk show rounds and indicated that, according to the Wall Street Journal, "the White House is open to attaching deficit-reduction measures to a [debt ceiling] bill."

This is very dangerous territory -- and yet another example of the White House conceding a big plum before the deal-wrangling even officially begins. Emboldened by winning their "historic" cuts in the first round of the budget wars, without having to go to their nuclear option of a government shutdown, it seems guaranteed that Republicans will be seeking deeper cuts via debt ceiling extortion. Rolling back healthcare reform is still very much on the agenda -- indeed, it is only one plank in a platform that includes a substantial overhaul -- and massive reduction in -- the social safety net that already exists.

If Americans emerge from the next year and a half of budget wars with a growing economy and health care coverage that covers more Americans and is more financially secure than when Obama came to office, then almost nothing else counts -- especially not the question of whether the GOP's success in getting $38 billion instead of $31 billion in cuts constitutes a huge victory and is testament to John Boehner's transcendent political brilliance.

These are big stakes. The truly baffling part of Obama's presidency is that we don't hear him making the big picture case to the American public often enough. The Republican agenda is clear: rolling back the Great Society and the New Deal, keeping taxes low and asserting that we can't afford to take care of our poor, sick, and elderly. The Democratic agenda should be the opposite. So let's hear it! And when the dust settles in November 2012, then we can declare a winner.