Is Japan's nuclear crisis really as severe as Chernobyl?

Japan's government has assigned the emergency the highest possible severity rating. How bad could it get? 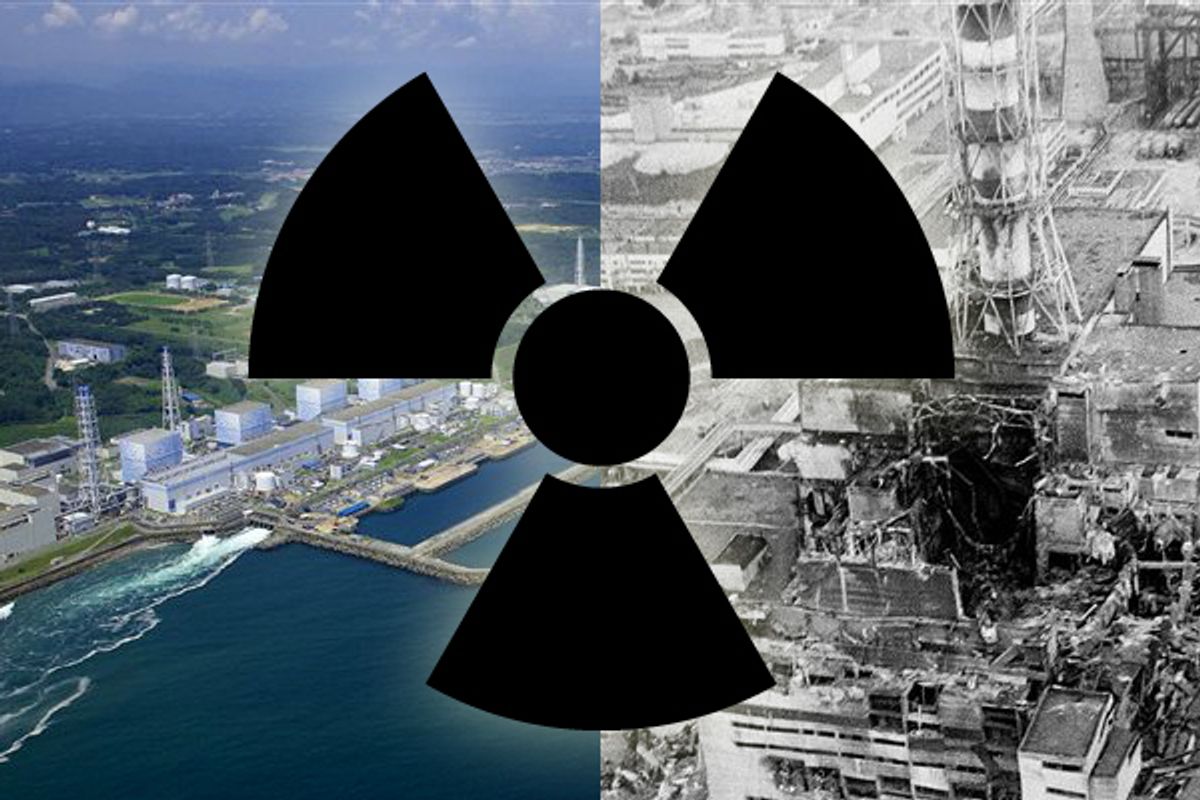 Japanese authorities increased the "severity rating"of the emergency at the Fukushima Daiichi power plant in Japan today, raising it from a level-five to a level-seven accident. Historically, the only other nuclear incident to garner that distinction has been the 1986 Chernobyl disaster.

This has prompted a barrage of questions about the possible consequences of the continuing crisis. We turned to  Joseph Cirincione, president of the Ploughshares Fund, a nonprofit organization focused on nuclear security issues, to understand the severity of the current situation, and potential end-game scenarios in Japan.

I think it alarmed a lot of people that now suddenly the Japanese government is saying the nuclear crisis is on par with Chernobyl. Is that characterization accurate?

I think the Japanese authorities finally were forced to publicly recognize the severity of this disaster. They were trying to keep the public calm, to preserve some credibility for the nuclear power industry, so they tried to use reassuring language in their statements, and were hesitant to compare what was going on at Fukushima to Chernobyl. And, of course, it's not Chernobyl. It's different.

Chernobyl was an explosion that launched about a third of the reactor core thousands of feet into the air, injecting a hot plume of radioactivity into the upper atmosphere and contaminating large parts of Europe. That is not what's going on at Fukushima. But as an official said at the Tuesday press conference, Fukushima could ultimately release as much or more radiation than Chernobyl. It was that realization, I think, that was behind the re-categorization.

Is the situation deteriorating at the plant?

The situation is deteriorating. I think that's the only fair way to describe it. You can forget words like "stable," or "under control." It's not. Every day brings a new risk of disaster, whether it's an aftershock that threatens to open up a crack in the containment vessels; or it's the water that's being streamed in, that could distort the fuel rods; or it's the leakage of this now-radioactive water into the ocean; or the fire that breaks out at the plant. Every day brings a new mini-crisis that could tip one or more of these reactors into meltdown. That's where we're at.

You have to understand that these reactors have been subjected to far more stress than they were ever designed to handle. And the stress continues. There have been hundreds of aftershocks. Just this week, there was a 6.6 quake. There are new predictions that the aftershocks could go on for some time, and be as powerful as a major earthquake. And, what [emergency workers] are doing is not in any safety manual. There isn't any Plan B that says, "Bring fire trucks to the beach and pump salt-water into the reactors," or "Rent giant concrete pumps and use them to spray water into the reactor."

Would you say, right now, there's as big a risk of meltdown as there has been during this entire ordeal?

Yes. They've been struggling to keep the fuel rods covered with water. And they partially succeeded. Still, it's likely that all three reactors have suffered at least partial meltdowns. But we don't know for sure what's going on. You can't open the door and look in. It doesn't work that way.

At this point, what do you think is the most likely scenario for how this situation will resolve itself?

I believe the most likely scenario is one or more meltdowns. I hope I'm wrong. But I think this is just beyond the capability of anyone to control.

What would the implications be of a major meltdown for Japan?

If one of the fuel rod assemblies melted, it would likely breach the concrete containment vessel and spew radioactivity to the ground, air and water at a much higher level than we've seen so far. You would be looking at hundreds or thousands of square kilometers contaminated for decades or centuries. You'd be looking at a dead zone similar to the zone that's around Chernobyl. It's hard to predict the radius, but it could be 10 or 20 kilometers. The dead zone around Chernobyl is about 3,000 square kilometers.

What's the best-case scenario? What will it take to get the plant stable and decommissioned, so it no longer poses a threat?

The best case scenario is you keep the rods covered with water for months, and that, sometime next year, you're able to do stabilization work. Then you could begin to bury the reactors. One way or the other, this ends with those reactors entombed under tons of sand and concrete, a permanent monument on the shoreline of Japan to this nuclear disaster.

And once it's buried, the concrete would contain the radiation?

Yeah, for decades. The problem is the concrete would wear out before the radiation stops. You kick the can a century down the road.