Authorities raise crisis level, though plant has only leaked 10 percent as much radiation thus far 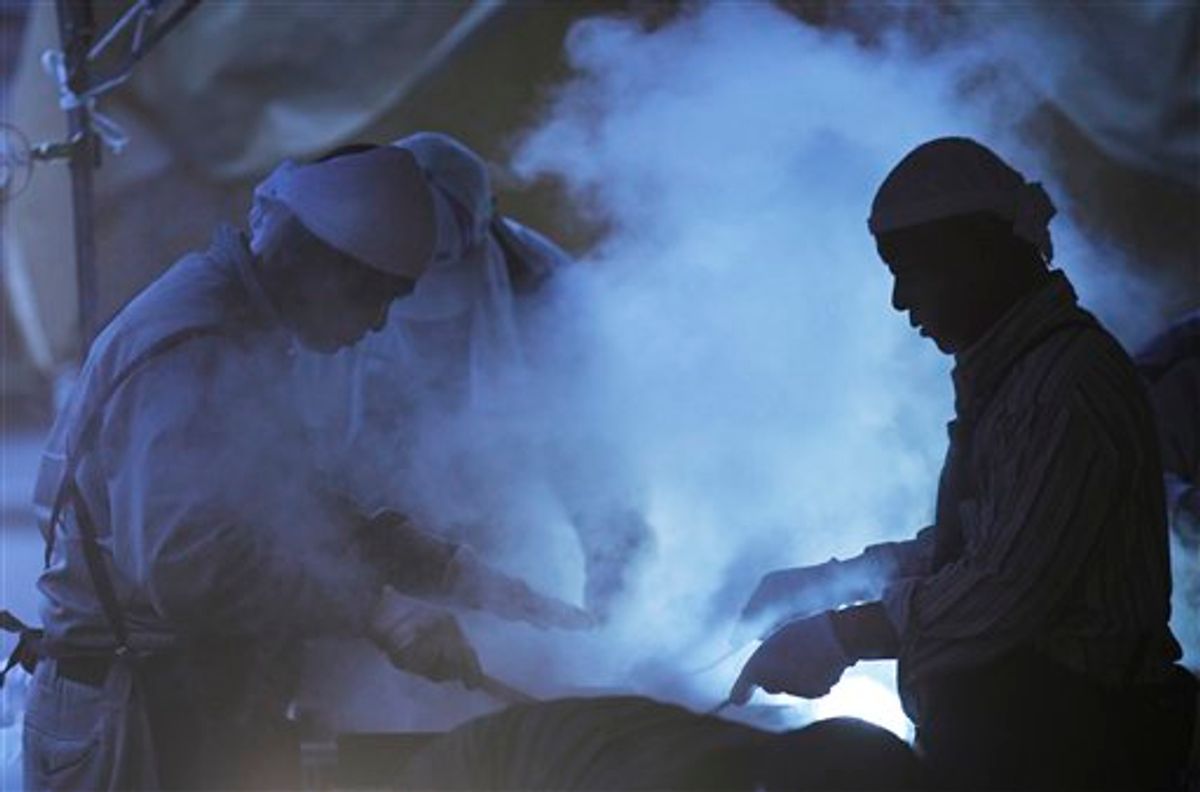 Volunteers cook noodles for evacuees at an evacuation center in Soma, Fukushima Prefecture, northeastern Japan, Monday, April 11, 2011, a month after an earthquake and tsunami struck the east coast. A group of 21 volunteers from Tokyo and Saitama brought Sunday 2,000 meals for about over 500 evacuees at the shelter. (AP Photo/Hiro Komae) (AP)
--

Japan raised the crisis level at its crippled nuclear plant Tuesday to a severity on par with the 1986 Chernobyl disaster, citing high overall radiation leaks that have contaminated the air, tap water, vegetables and seawater.

Japanese nuclear regulators said they raised the rating from 5 to 7 -- the highest level on an international scale of nuclear accidents overseen by the International Atomic Energy Agency -- after new assessments of radiation leaks from the Fukushima Dai-ichi plant since it was disabled by the March 11 tsunami.

The new ranking signifies a "major accident" that includes widespread effects on the environment and health, according to the Vienna-based IAEA. But Japanese officials played down any health effects and stressed that the harm caused by Chernobyl still far outweighs that caused by the Fukushima plant.

The revision came a day after the government added five communities to a list of places people should leave to avoid long-term radiation exposure. A 12-mile (20-kilometer) radius already had been cleared around the plant.

The news was received with chagrin by residents in Iitate, one of the five communities, where high levels of radiation have been detected in the soil. The village of 6,200 people is about 40 kilometers from the Fukushima plant.

"It's very shocking to me," said Miyuki Ichisawa, 52, who runs a coffee shop in Iitate. "Now the government is officially telling us this accident is at the same level of Chernobyl."

Japanese officials said the leaks from the Fukushima plant so far amount to a tenth of the radiation emitted in the Chernobyl disaster, but said they eventually could exceed Chernobyl's emissions if the crisis continues.

"This reconfirms that this is an extremely major disaster. We are very sorry to the public, people living near the nuclear complex and the international community for causing such a serious accident," said Chief Cabinet Secretary Yukio Edano.

But Edano told reporters there was no "direct health damage" so far from the crisis. "The accident itself is really serious, but we have set our priority so as not to cause health damage."

Hironobu Unesaki, a nuclear physicist at Kyoto University Research Reactor Institute, said the revision was not a cause for worry, that it had to do with the overall release of radiation and was not directly linked to health dangers. He said most of the radiation was released early in the crisis and that the reactors still have mostly intact containment vessels surrounding their nuclear cores.

The change was "not directly connected to the environmental and health effects," Unesaki said. "Judging from all the measurement data, it is quite under control. It doesn't mean that a significant amount of release is now continuing."

Prime Minister Naoto Kan, in a national television address, urged the public not to panic and to focus on recovering from the disaster.

"Right now, the situation of the nuclear reactors at the Fukushima plant has been stabilizing step by step. The amount of radiation leaks is on the decline," he said. "But we are not at the stage yet where we can let our guards down."

Continued aftershocks following the 9.0-magnitude megaquake on March 11 are impeding work on stabilizing the Fukushima plant -- the latest a 6.3-magnitude one Tuesday that prompted plant operator Tokyo Electric Power Co., or TEPCO, to temporarily pull back workers.

Officials from Japan's Nuclear and Industrial Safety Agency said that the cumulative amount of radioactive particles released into the atmosphere since the incident had reached levels that apply to a Level 7 incident. Other factors included damage to the plant's buildings and accumulated radiation levels for its workers.

"We have refrained from making announcements until we have reliable data," said NISA spokesman Hidehiko Nishiyama said. "The announcement is being made now because it became possible to look at and check the accumulated data assessed in two different ways," he said, referring to measurements from NISA and Japan's Nuclear Security Council.

NISA and the NSC have been measuring emissions of radioactive iodine-131 and cesium-137, a heavier element with a much longer half-life. Based on an average of their estimates and a formula that converts elements into a common radioactive measure, the equivalent of about 500,000 terabecquerels of radiation from iodine-131 has been released into the atmosphere since the crisis began.

That well exceeds the Level 7 threshold of the International Nuclear and Radiological Event Scale of "several tens of thousands of terabecquerels" of iodine-131. A terabecquerel equals a trillion becquerels, a measure for radiation emissions.

The government says the Chernobyl incident released 5.2 million terabecquerels into the air -- about 10 times that of the Fukushima plant.

If the leaks continue, the amount of radioactivity released in Fukushima could eventually exceed the amount emitted by Chernobyl, a possibility that Naoki Tsunoda, a TEPCO spokesman, said the company considers "extremely low."

In Chernobyl, in the Ukraine, a reactor exploded on April 26, 1986, spewing a cloud of radiation over much of the Northern Hemisphere. A zone about 19 miles (30 kilometers) around the plant was declared uninhabitable, although some plant workers still live there for short periods and a few hundred other people have returned despite government encouragement to stay away.

In 2005, the Chernobyl Forum -- a group comprising the International Atomic Energy Agency and several other U.N. groups -- said fewer than 50 deaths could be confirmed as being connected to Chernobyl. It also said the number of radiation-related deaths among the 600,000 people who helped deal with the aftermath of the accident would ultimately be around 4,000.

The U.N. health agency, however, has said about 9,300 people are likely to die of cancers caused by radiation. Some groups, including Greenpeace, have put the numbers 10 times higher.

The Fukushima plant was damaged in a massive tsunami that knocked out cooling systems and backup diesel generators, leading to explosions at three reactors and a fire at a fourth that was undergoing regular maintenance and was empty of fuel.

The magnitude-9.0 earthquake that caused the tsunami immediately stopped the three reactors, but overheated cores and a lack of cooling functions led to further damage.

Engineers have pumped water into the damaged reactors to cool them down, but leaks have resulted in the pooling of tons of contaminated, radioactive water that has prevented workers from conducting further repairs.

A month after the disaster, more than 145,000 people are still living in shelters. The quake and tsunami are believed to have killed more than 25,000 people, but many of those bodies were swept out to sea and more than half of those feared dead are still listed as missing.

Associated Press writers Shino Yuasa and Noriko Kitano in Tokyo and Eric Talmadge in Soma contributed to this report.