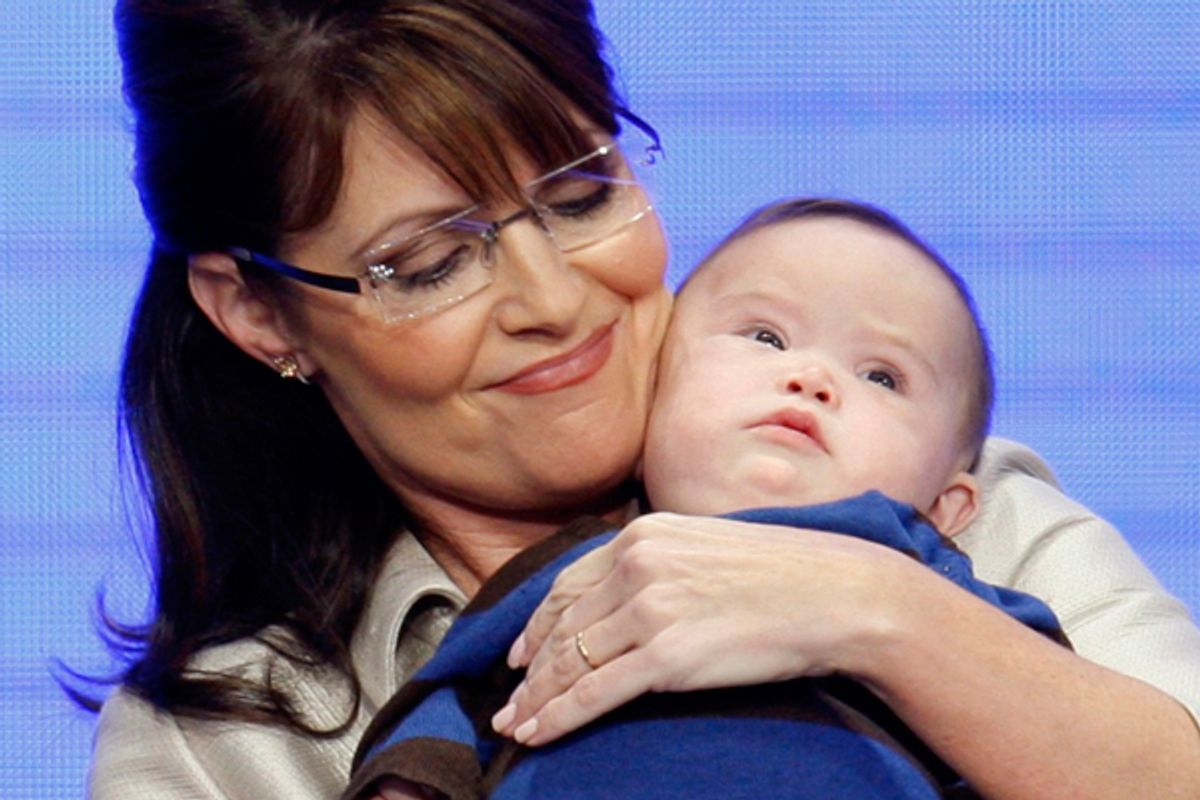 (UPDATED) A journalism professor at Northern Kentucky University is trying to revive the conspiracy theory that Sarah Palin is not the biological mother of Trig Palin.

Brad Scharlott of NKU (pictured below) has written a 29-page academic-style paper titled "Palin, the Press, and the Fake Pregnancy Rumor: Did a Spiral of Silence Shut Down the Story?" It begins like this:

"This article looks at what American journalists knew, and when they knew it, concerning the fake birth rumor -- and it finds there was insufficient evidence for the press to conclude that Palin was telling the truth about Trig."

This is the idea, known as Trig Trutherism or Trig Birtherism and long pursued by such proponents as Andrew Sullivan, that Sarah Palin faked her 2008 pregnancy because Trig is actually the son of Bristol Palin.

Scharlott's article strongly suggests that Palin's pregnancy was a hoax and even includes analysis of photos purporting to show Palin's "extremely flat stomach" when she was pregnant. The fact that a journalism professor produced this article is frankly embarrassing for Northern Kentucky University.

It is now being shopped around by Scharlott's P.R. representative, Jennifer Campana, who pitched it to me after reading a piece I wrote yesterday debunking one of the birther claims made by Donald Trump. Campana's pitch argues for a kind of Birther fairness doctrine:

In the research paper, Scharlott examines Palin’s pregnancy in great detail, laying out more than 20 pages of photos and other evidence – largely compiled from quotes by Palin herself. He concludes that Palin did indeed fake her pregnancy with Trig, not only to cover for her daughter Bristol, but also to gain pro-life street cred with the far right. He then goes on to examine the role that the press played in helping to cover up the hoax, intentionally or not, by never investigating it thoroughly enough. Had journalists dug deeper, the answers were easy enough to find.

After all, with all the press Donald Trump has received recently for the birther issue, it is time the OTHER birther issue was given equal space.

In any case, Scharlott has now gotten into a public spat with Palin's former spokesman, and, in response, author Joe McGinniss is promising that his forthcoming book on Palin will deal with the Trig issue. So don't expect this to go away any time soon.

Here is Scharlott's paper, which "has not yet been accepted" for presentation at an academic event:

UPDATE: Andrew Sullivan has responded to this post, contesting my characterization of his Trig Birtherism:

"All I have done is ask for evidence that Sarah Palin is the biological mother," he writes, not flatly asserted that Bristol is Trig's true mother.

Sullivan then argues (as have many commenters) that my dismissal of Scharlott's paper is yet more evidence of the "spiral of silence" that "shut down the story."

I won't spend much time in the rabbit hole of Trig Birtherism, but it is worth reading this Dave Weigel post noting the lack of affirmative evidence that Palin's pregnancy was a hoax. Atrios also makes a solid point on the whole matter here.