The family I hid from my wife

I fell in love with Lisa, and we had a child. There was only one problem: I was already married with three kids 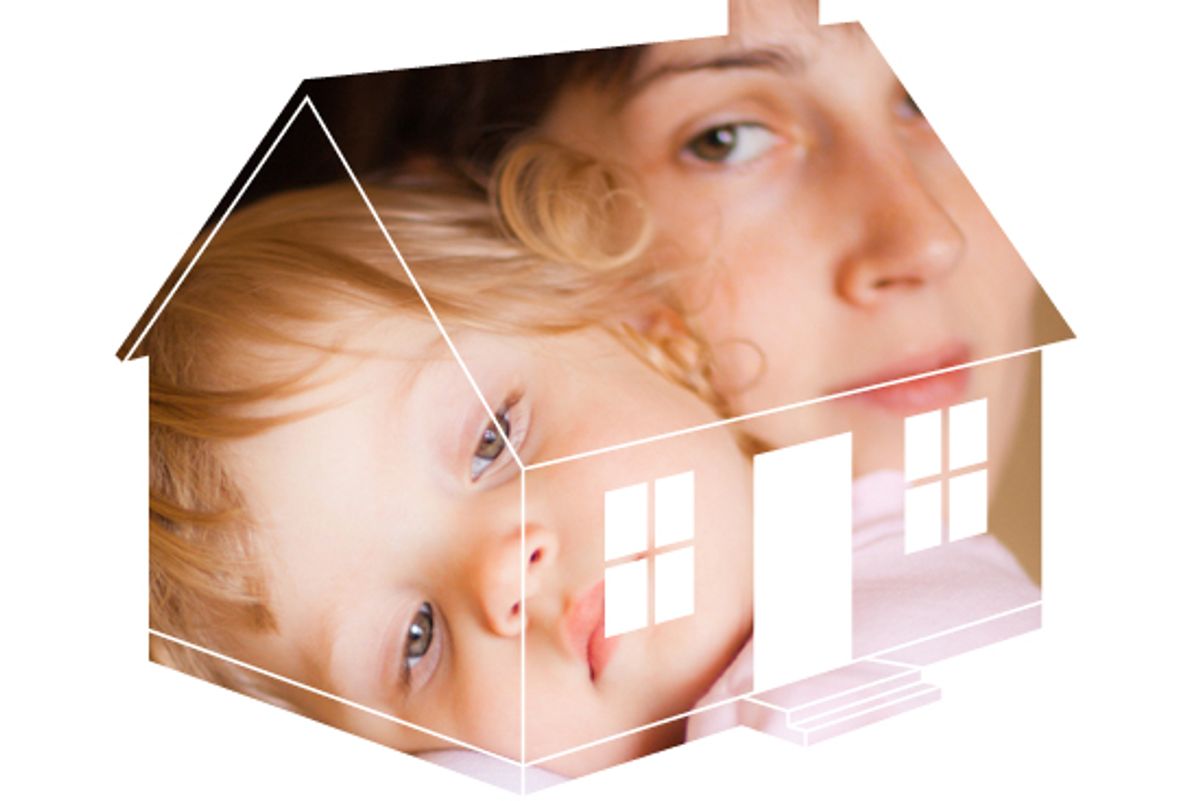 I got married because I was tired of being single and enduring a succession of short-term flings. Also, my sister had just died, and her 6-year-old son needed a place to escape once in a while from his grandparents, now in their 70s and raising him. My brother's plate was full with four kids, and he lived in Spain. So, I decided to marry the girl I was dating. She was no better or worse than the scores of other girlfriends, whose names I have long forgotten and whose faces I cannot remember. I guess marriage to me was like musical chairs -- when the music stopped, I married the one left standing. I did care for her, but there is a difference between being "in love" and loving someone. She was a good person.

My wife was solidly upper middle class, very creative, a perfect social hostess. We had some mutual interests. Both of us were good skiers, we shared a common enjoyment of travel and an appreciation of music, art and architecture. But three children and 20 years later, we had nothing in common and nothing to say to each other. We hadn't had sex in years, and we did not miss it. There is nothing unusual about what caused our alienation: The long hours I worked to give my family a good life, an accumulation of hurts and resentments, poor communication. There is something unusual, however, in what happened next. Four years ago, I met an American woman and fell madly in love. She became pregnant with my child, a secret I kept from my wife.

I had two families, two realities. In my first reality, I had three preteen to teenage children, a responsibility to give them the best springboard for life, whether that meant helping them with homework or giving them advice on problems. In my second reality, my love was going through a tough divorce, she had two young children and a third from me. Money was not an issue, at first, nor was finding time. I work for myself and travel often, allowing me to see my love frequently. But my conscience kept me awake at night. My wife and I had silently acknowledged that we would probably part when the kids left. We kept separate bank accounts, took separate vacations. In the meantime, I had a woman I could envision growing old with, a woman who would soon be available and was carrying my child. So, I discussed this with a priest. After he finished howling with laughter, he advised me not to tell my wife but find a time when the children were older to explain. They will be angry, he told me, and you better be ready to move out if your wife discovers the truth. But that was the least of my problems. I had lived over half a lifetime and never felt true love; now, I was truly happy -- and I was living a lie.

I grew up in the U.K., and though I moved to the States, I never much cared for American women. I found them too materialistic and emotionally needy, spiritually warped by commercial television. But Lisa (not her real name) was not like any other American woman I had met.

Lisa and I met while I was working on a project. She was in her mid-30s but looked not a day over 30. She was tall, intelligent, attractive, with a sense of mischief. We spent hours talking about anything and everything. I had never met a more sensual, intoxicating woman. To me, she was a goddess.

Instead of being put off by an affair with a married man, Lisa considered the idea dangerous, risky fun. We lived more than 200 miles apart, but each rendezvous was an adventure. She was comfortable with her sexuality, a considerate lover, and I could tell, from watching her with her children, a caring mother. Above all she was appreciative and offered emotional support and encouragement, something I had not experienced in years. For her, our escapades were a kind of therapy for the pain of her divorce. For me, it was everything I had ever wanted from a woman.

But there was a big problem. I was married, and, initially, so was she. We could tell no one of our attachment -- her, the home wrecker, and me, the philanderer. So, we created our own reality, our own set of rules and understandings. One rule was that she could date other people (as I was married there was no argument). But the most important rule for me was that I would never hurt my kids. Many times Lisa and I had rued how society insists if a partner is unfaithful, the next stop is the attorney. That's whom my wife would call if I told her. Why, we asked, could grown-ups not just agree the magic was gone and find others to fill that emotional need but still keep the family together? The truly selfish act wasn't infidelity; it was putting your own hurt and sense of betrayal before the children's interests. Kids need the reassurance of stability. I'd seen statistics that children from broken homes show higher rates of drug use, psychological and other emotional issues. Wasn't I taking the ethical road -- putting my desires and dreams second, even if others disapproved, even if it meant Lisa and I only got to see each other a few days during the month?

Eventually this strange world we had created began to feel like the one we could not live without; we were in love. She began to speak about her wish to have another child in addition to her two boys from her previous marriage, and her fear that by the time she married again she would be too old. I loved kids, so we made a pact that if she got pregnant we would have the baby. It became more than that, though; we both began to want to have a child together. It gave profound meaning to being in love. It came to represent our hopes for the future. When she announced her pregnancy, five months later, we were delighted. Her family took it well, considering. They knew I was married, but they also saw the positive impact our relationship had on her.

And so I came to that point of having two realities lived daily: one focused on work, getting my kids through their teenage years and out into the world; the other was all magic, romance and dreams. I hoped that sometime in the future, maybe in five to six years, Lisa and I would be together. Our idea was to transition gradually: In these early years, we would spend only a few days together each month, and she was free to see others. As my children grew older and more independent, I would spend more time with her and our child. If she met someone special in between now and then, I would step aside. Deep down that was my worst fear, but also a fatalistic hope, because as much as I adored her, I wanted her to have someone who could give her everything she deserved. It would be the happiest and saddest day of my life, I would tell her, the day she married someone else.

Surprisingly, this arrangement worked, for a while at least. At home I was more relaxed, more fun to be around. Lisa had stability and release from what was becoming a nasty drawn-out divorce. I paid her child support and helped with the mortgage. She told me that in the first three to four years after a child is born, men just add to stress. They want attention and sex, and after feeding a baby or chasing a toddler all day, you have no energy or time left for a significant other. She did not demand much of my time, and I did not demand much from her. It was an unconventional arrangement, but I had never been happier. As far as I could see, there were no hurt feelings.

Then this dreamland got hit by a dose of reality. A year after our son was born Lisa began demanding I spend more time with her. Two young boys and a baby took its toll physically and emotionally. But at the same time, the financial crisis hit me hard. Defaults by clients left me in debt and like millions of Americans, I was hustling to stay afloat. When a client was months late paying me, I was late paying my bills and Lisa was late being paid too. In my first home, I asked my wife to step up to the plate, use my contacts to find work, but she lacked the confidence and the drive to do so. In my second home, Lisa wanted me to compensate for my financial stresses by spending more time with her. But there was no extra time to give. I was working 16 hours a day trying to keep her lights on. She interpreted all this as a slight to her, like she was being treated as a cheap mistress. Suggestions that she date or find a boyfriend were treated as insults. I was hoping for emotional support and encouragement through difficult financial times, but there was little to be had. All the loving, magical dreams went out the window. Now reality was taking its revenge.

Her friends, weaned on the cheap morality of tabloid TV and glossy magazines, believed there was no greater crime than a man cheating on his wife. If he loved you, they told her, he would leave his family and marry you. I was a cheat, I couldn’t be trusted. The fact that the president of France, Prince Charles, countless rock stars and bankers, a host of society luminaries as well as former presidents of the United States maintain this kind of situation as their everyday reality -- and it is understood by their partners, who are mostly doing the same -- does not matter one jot. To her, it was an issue of fairness. If I wasn't going to pay her on time, I had to make it up with my own time. The bottom line became: I had to dump family one and take my role in family two. In other words, I had to violate the one simple rule that had meant the most to me. I had to hurt my kids.

The goddess had become all too human. In fact, she had morphed into the archetypal American female; her expectations and needs trumped all other concerns. These days, we have polite conversation. She has a new boyfriend, who never ceases to remind her what a fiend I am. I still see my son and support him. My eldest son from family one has even met his younger brother, and many of my friends and extended family know about him. I have two families, two partners and no emotional contact with either.

I do have memories, though. For two wonderful years life was a romantic dream, a place where we made the rules, and our rules were right. For Lisa, it is about broken dreams. "You bit off more than you could chew," she tells me. The freedom she was offered in the beginning turned to loneliness, a need to have someone share her life not years in the future but as a day to day reality. I do know that is how love dies: Reality kills it.

PJ McDowell is the pen name of an East Coast writer and blogger. He has four children and two estranged partners.