Let's wait for Obama's speech before we react to it

Bad and good news for Dems trickled out all day. We can still hope the president rejects the GOP's premises 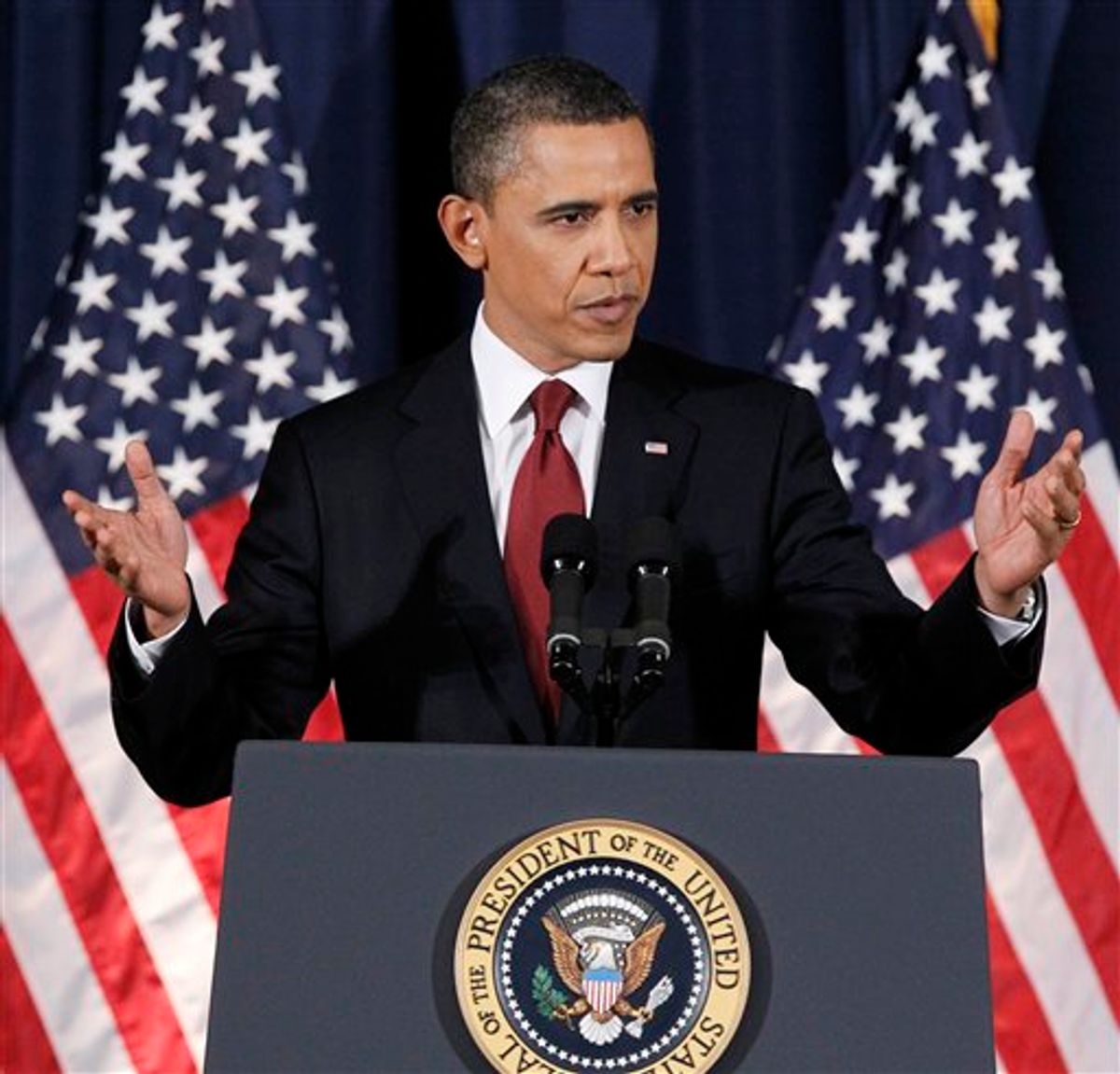 On the eve of President Obama's heralded speech laying out his own budget vision, it seems like a waste of time trying to predict exactly what he'll say. Tuesday brought various alarmist reports -- he'll endorse the Simpson-Bowles entitlement cut plan; he'll make a deal tying raising the debt ceiling to deficit reduction (as the GOP demands) -- then came evidence that those things were maybe possibly not true. I think it makes sense to wait and see what the president actually says tomorrow.

In the meantime, a debate rages on the left about a couple of budget-related moves by the president: His agreeing last Friday to cut hundreds of millions of dollars from programs like nutrition for women, infants and children, community health centers and occupational health programs, in order to prevent a government shutdown, and his depicting that deal as a victory. I wish Obama had held the line more, but unlike a lot of people, I don't begrudge his framing it as a victory. In the short term, the strategy appears to be working: Polls show Americans credit the Democrats with compromising and avoiding a shutdown.

In the long term, however, as I've argued before, Obama has failed to project and execute a vision of Democratic Party policy and values that's as bold as the challenges the nation faces, marked by Gilded Age levels of economic inequality, as well as economic suffering surpassed only by the Great Depression. Both those periods gave us "big bangs" of social change, in the words of Jacob Hacker; this era has not. So far it produced a healthcare reform plan that's laudable for putting a stake in the ground toward universal coverage, but whose compromises with the GOP and the insurance industry could ultimately unravel it. Now people are worried that Obama will compromise on two signature programs of great Democratic presidents: Social Security under Franklin Delano Roosevelt and Medicare under Lyndon Baines Johnson. I hope he doesn't do that Wednesday, and I also hope he lays out some broad vision of social justice that begins to reverse the trends of the last 30 years. (Leaking that he'll be calling for tax hikes on the rich is a little bit encouraging.) He could provide new reasons for people to support the Democratic Party: a progressive vision of fairness and equity that's up to the challenge of the times.

But at the end of the day, on domestic policy anyway, you can criticize some of the president's tactics and decisions, but it's pretty tough to argue he had a lot of political room to be bolder, hampered by Blue Dog Dems and now a GOP majority in the House, and conservatives like Ben Nelson, Mary Landrieu and Joe Lieberman in the Senate. I'd like him to talk bolder, and maybe he will on Wednesday. In the Nation, Melissa Harris-Perry articulates the country's hunger for a "story" that makes sense of our current crisis of politics, economics and values -- and didn't find it in the president borrowing the GOP "story" about how, just like a "family," we all have to tighten our budgets.

But the bigger issue is, there's no well-organized and vocal constituency demanding that Obama speak or act more boldly. This is why I think the left should take its focus off the president for a while, and build constituencies behind a new social justice agenda for the 21st century, working in outside organizations as well as politics at the state, local and congressional level. It's why I oppose the idea of a primary challenge from the left; but why I also don't want to see progressive energy solely focused on the president's reelection juggernaut, Obama 2012.

There are signs of life on the left: Thanks to Scott Walker's overreach, labor is newly energized; I don't know if that will mean gains in unionization, although I hope it does. But the AFL-CIO has emerged as the locus of new activism and new policy discussions about economic fairness, and that's encouraging. People are understanding what Kevin Drum lays out well today: Labor is being targeted because it is the last source of funding and person-power behind Democrats in their battle against corporate America, which otherwise controls the resources and thus the debate. Meanwhile, voters in Wisconsin, Ohio and other states that elected Republicans in 2010 are trying to figure out how to make sure those GOP gains get reversed in 2012. Speaking of Ohio, Sen. Sherrod Brown is taking the lead in lining up senators to urge Obama to hold the line on Medicare. House Democrats are pushing to make sure the president doesn't cut Social Security. A House Progressive Caucus budget lays out a way to cut the deficit without hurting the vulnerable or seniors, with tax hikes on the rich, closing corporate tax loopholes and cuts to the military. Progressives are also making the case that a jobs agenda could help the long-term deficit, if we got more people back to work, paying taxes, contributing public revenue resources instead of draining them. These are all good things for Democrats, whatever the president says Wednesday.

We must also always remember: Nothing was handed to us in this country. Every "big bang" of social reform followed creative and urgent, sometimes desperate, activism and agitation. The New Deal followed decades of strikes and massive protests; the Great Society emerged in response to decades of organizing by the growing civil rights movement and its rising readiness for civil disobedience.

I've been in the middle of a hot debate over the last week that stripped down to its essentials (we'll leave out the late-night Twitter spats) is about whether critics of the president are fair to him -- a really great question, one I've been giving a lot of thought to lately. I think we have to be fair -- and to push at the same time. Obama has been hamstrung by Congress on a lot of issues, so we must work to change Congress. But to sit back and just applaud the president's wisdom and vision, and insist that nothing about what he's doing can or should be different, bolder, more progressive, is an abdication of responsibility by any citizen, progressive or not. As I've said many times before, Obama is probably as liberal a president as could be elected right now. I'd like to change that, not by trashing Obama, but by changing the political equation as he sees it.

I'd also venture to say that pressure from the left is part of why the president led with his announcement that he plans to call for tax hikes. I'm hoping there is more in his budget speech that recommits him to a course of economic equality and justice that even many Democrats seem to have abandoned, as they chased corporate dollars, in the last generation. One of the most disturbing facts I gleaned from CNN's 2010 exit polls is that Americans who thought Wall Street caused our economic collapse voted Republican. That's farcical; how did we fail to tell a better story about that? We'll find out Wednesday if the president has a vision to do so.

I talked about all of this with Chris Matthews on MSNBC's "Hardball" today: