How my son's ashes finally found their place

For years, they sat in a vase on a shelf, a reminder of a loss too painful to accept. Now, I'm ready to let him go 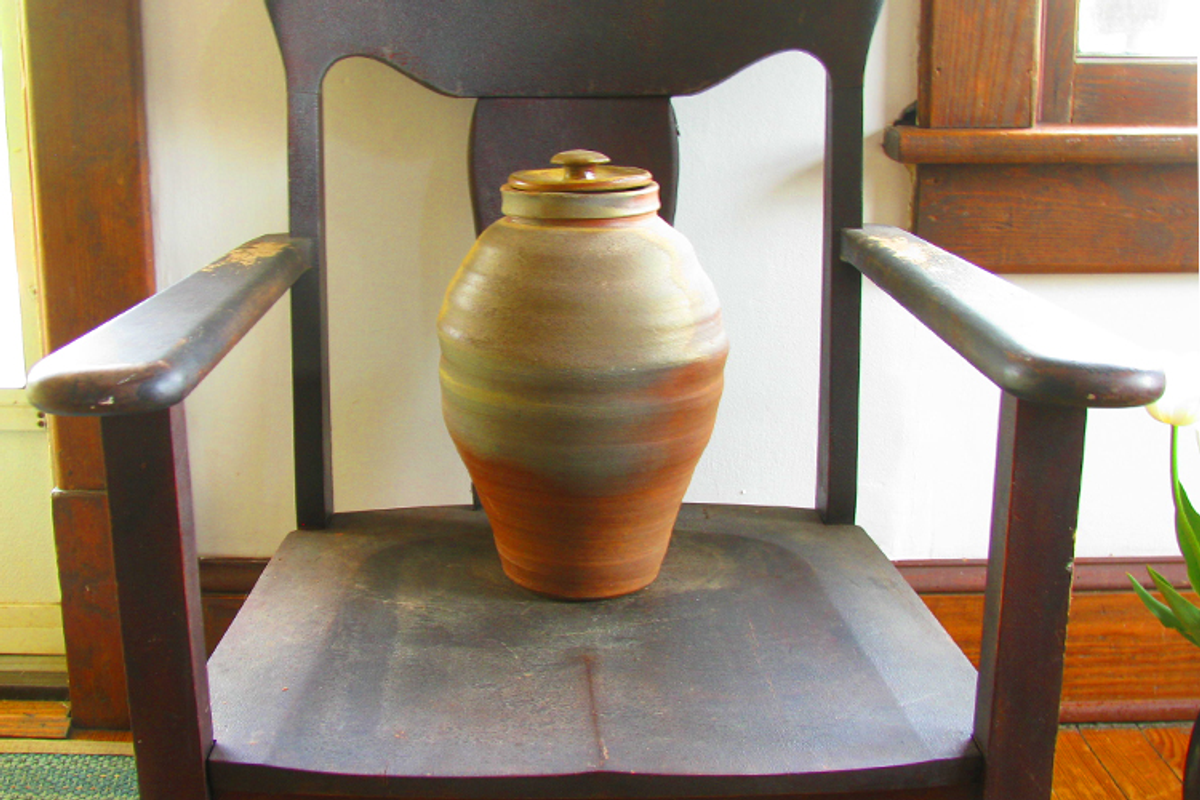 The vase that holds the ashes of the author's son
--

My son was young, 20, when he died, and it was unfair, as unfair as things in life go, which is to say no parents should ever see the sight of their dead child's body. And we talked as much as you can talk within a three- or four-day period after a death about whether to bury him or cremate him. In the end, we cremated him, though as parents, what would suit you? What would make it easier for you to sleep at night?

But we cremated him and we kept his ashes. They are now in one of my favorite vases that a friend gave me years before we ever thought we'd use a pottery vase for such a task. And where is the vase? It sits anyplace we like, even for a time in a friend's living room when we were moving. Anyway, it makes you think, maybe not daily, but certainly weekly or monthly, about the event of ashes in your living room and what exactly you're doing with them.

When you first have the ashes you think you have them in order to scatter them. And that makes a certain kind of sense. You have the ashes of the person you love and you want to go to one of the places he loved and sprinkle little bits of him on that spot. And you imagine that this will be a liberating activity. But ashes like these clump because they are the small bone parts and other remains of what was once a person, so they don't flow in the wind as you would like. So, you're upset to begin with and then you go to a mountaintop cabin and intend to sprinkle ashes that clump and it's horrifying and funny all in the same breath. So you bring the ashes back home and you hide them.

Then that seems stupid, so you just leave them out.

But the same head space you use to remember your son fondly and all that he said and all the places he went in the years he did have, you also use to consider these ashes. And sometimes you get tired of thinking. And so maybe whole years pass with the vase containing the ashes being moved from spot to spot in a kind of casual way because otherwise your house feels like a mausoleum with an altar to this small collection of bone. There are entire years when just looking at the vase was more than any one of you could handle. You didn't want to think about him being dead so you avoided the subject of him, his photos, his clothes, the stuff from his room, the vase.

So then, could it be? You get tired of seeing the vase! Jesus, that damn vase, is what you sometimes catch yourself thinking when you vacuum or need to reach behind them to get something. God almighty, could you just not be there one time? When you're beating yourself up for getting irritated with the only part of him you have left, you say to yourself, if he were alive and standing here, would you be pleased every moment? Would you never say, damn it, you borrowed the car, now fill it up? Or, would it kill you to dress a little nicer when you visit your grandmother? And, take a shower? Wash that hair? No, you would say these things, so you are irreverent, occasionally and justifiably, to the vessel containing his ashes. Ha, you say when you are forgiving yourself, he never expected perfection from you.

Maybe after six years you realize that once someone is dead he stays dead, so you have longer than you thought to collect ideas about what to do with the ashes. You can think he is telling you what to do with them -- you can think the presence of cardinals in your front yard, your sister's yard, everywhere you walk, is telling you what to do with his ashes, but probably not. That might be him checking in, but as to actual directions, I've never gotten any. The only imperative, really, is that you have to accept that little part of death -- the final part.

Options I've considered fall anywhere in between starting an Ashes to Ashes, Dust to Dust Club to putting the thing out with the recycling. I try to use the ashes as a way to talk about death and dying, to talk to our girls about their brother and to our nieces and nephews about his funny moments -- the highlight reel, I guess you could call it. I remind them that he was a good guy, not perfect, but good enough for all of us. And my hope is that knowing about those ashes might, in some small way, keep them safe from dying in a car accident. It's worked so far. No one else has gotten into a car after a party and died. They might have gotten into a car after a party. But no one's died. That's the kind of legacy thinking you do when your son is the only one of a large group of cousins who has died. You think: Let's not let anyone else die this way.

You eventually decide to get rid of his ashes a little bit at a time. Years pass and you think about how he didn't get to go anywhere except to the shore with his beach-loving grandparents, on those ridiculous spring break trips with your sister and her children during which you called people from the road and bullied them into letting you stay at their houses with your five children, the trip to Maine the summer before he started college with all five of you in the Grand Cherokee that burned oil, sleeping in rest stops, camping because you only had $700 in cash to spend for a whole week's vacation and clothes for him so he could look at least like a preppy redneck at college.

So, we started giving away little boxes of his ashes. He has since been to Africa. Costa Rica.

Our daughters took some with them to the White Cliffs of Dover and so he is there. Imagine the view. His cousin took ashes to the Highlands in Scotland and as he was coming down a mountain, the mist broke into sun and a rainbow covered it all. We like the picture he took of that; we like the feeling that although you can't get decisions from a dead person, you do sometimes get something like a rainbow to confirm your efforts.

I'm not sure about where to go from here. It's only been eight years and that's not long in the history of the world. A 92-year-old friend of mine died a couple of months ago. She lost two of her six children. One died in a car accident and one was murdered. A daughter of hers told me that before she died she said, I wouldn't change a thing about my life. But I'm not 92, I'm 55 and I can't say that yet.

I can say you might pick up the phone as I did last summer to call and ask him if he'd just heard the song I was listening to on the radio. I can say that after eight years, you might still be as likely to do this as not.