The roots of modern GOP resistance to healthcare reform date back to 1964, when Johnson clobbered Goldwater 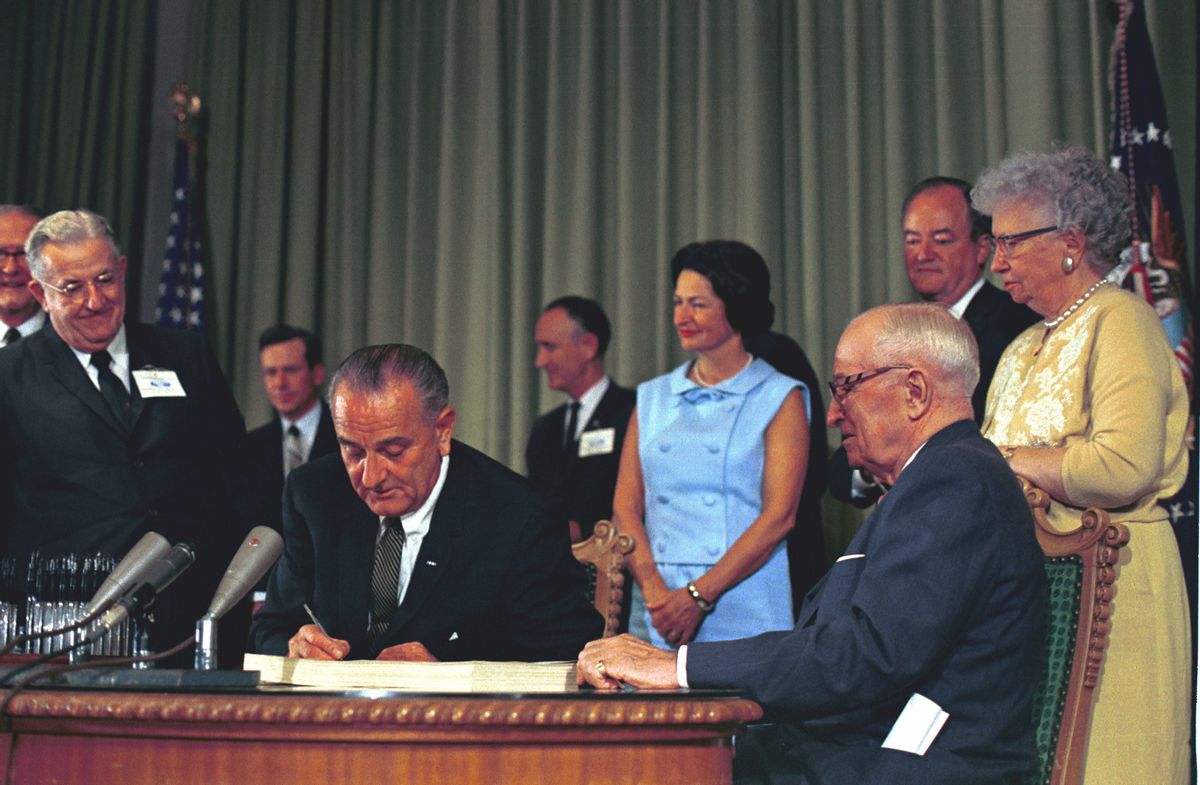 History remembers Lyndon Johnson as the creator of Medicare and Medicaid, but Barry Goldwater, the arch-conservative Johnson annihilated in the 1964 presidential election, deserves his fair share of the credit. A month before Election Day, Goldwater interrupted his campaign in Arizona to fly back to Washington for the sole purpose of voting no on a key precursor to what became Medicare. The Johnson campaign capitalized immediately with a television ad pointing out that Goldwater had voted "against a program of hospital insurance for older Americans."

Democrats already controlled the House and Senate before the 1964 election, but a coalition of Republicans and conservative Southern Democrats had hitherto managed to stymie every attempt to make that crucial first step toward what the American Medical Association's spokesperson Ronald Reagan decried as "socialized medicine." But on Election Day, Johnson's landslide victory ushered in majorities so huge that reaching a goal Democrats had been seeking since Harry Truman's first term finally became inevitable. Johnson's mandate was undeniable, and even the powerful Arkansas Democrat Wilbur Mills, chairman of the all-important House Ways and Means Committee, who had long stalled a House vote on Medicare, was forced to acknowledge it. As Johnson told Vice President Humphrey in March 1965, with the kind of Southern slang laxative analogy that only he could pull off, in the new political atmosphere, "Medical care will go through like a dose of salt through a widow woman." And he was right.

So who knows? If Goldwater hadn't been such a bad candidate, Medicare might have been delayed further, or even forestalled indefinitely.

There were other factors, of course. In the mid-1960s, the United States was in the middle of one of its greatest all-time sustained economic booms, providing room for Americans to dream big and act magnanimously. Lyndon Johnson boasted an unparalleled knowledge of the ins and outs of the legislative process and was probably better at twisting arms to get his way than any other post-WWII president. A perfect storm was required for the creation of Medicare and Medicaid -- a fact awesomely attested to by the difficulty Democratic presidents have faced ever since in attempting to further improve the healthcare safety net. The fact that Obama, who not only lacks the legislative skills of Johnson but faces a united front of Republican politicians distinguished primarily by their utter absence of twistable arms, managed to get anything passed at all in the middle of a horrible economy is all the more amazing when you look back at all the advantages Johnson enjoyed.

But from the vantage point of 2011, the question of whether 1964's perfect storm permanently altered the healthcare landscape of the United States now seems open to question. Medicare is still hugely popular, but a combination of rising costs (driven by demographic changes and accelerating medical expense inflation) and decades of Republican success at reducing the relative proportion of taxes paid by Americans, has resulted in a Catch-22. We like our expensive social welfare system, but we aren't willing to pay for it. Even worse, as it gets more expensive, we are willing to pay less and less! Furthermore, the Republican Party has never accepted its defeat in 1964 -- in fact, you can easily argue that the rise of the modern conservative movement got its start from the twin motivations of Goldwater's debacle and Johnson's Great Society successes.

The budget proposal released last week by House Budget Committee Chairman Paul Ryan includes the most substantial assault on Medicare and Medicaid as we know them in decades. And even if Ryan's agenda breaks on the rock of popular outcry and Senate Democratic resistance, that still doesn't solve the problem of how to pay for the programs. Obama, far from being remembered as the president who expanded healthcare coverage for all Americans, might end up as the leader who presided over the first significant retrenchment of these pillars of the Great Society.

Which makes it all the more amazing to go back and look at the legislative sausage making involved in the creation of Medicare and Medicaid. Because if there's anything that jumps out from accounts of the struggle Republicans waged against any involvement by the government in medical care, it was how similar their proposals were to important aspects of the Affordable Care Act today. Republicans attempted to fend off the specter of socialism by proposing plans in which the government would provide subsidies to private insurers that supposedly create incentives encouraging them to cover the elderly. Sound familiar?

That some kind of fix to the system was necessary became increasingly obvious to both sides, as Peter Corning wrote in "The Evolution of Medicare: From Idea to Law."

The need for some program was almost self-evident; the sharp decrease in personal income and greatly increased medical needs of those who had reached retirement age conspired with the rapidly rising cost of medical care to create an imperative. Alternative solutions had been tried or examined and had been found wanting. Consequently, political support for Medicare had gradually increased, while the opposition diminished. Some observers detected a significant fall-off of antagonism toward Medicare within the business community during 1964-65. One sign was the fact that some local Chambers of Commerce reportedly broke with the position of the parent body in Washington, which had always stoutly resisted the proposal. In addition, public support for Medicare rebounded after the brief slump in 1962; polls during 1964 indicated that about two-thirds of the electorate again favored the idea.

The final brilliant stroke that co-opted nearly all opposition was Wilbur Mills' decision to incorporate a key Republican proposal as an addition to the legislation being pushed by Johnson. Originally, healthcare for the elderly was envisioned as targeted solely at hospitalization costs -- remember the TV advertisement reference to "hospital care"? Treatment by physicians outside of hospitals was not included -- in part because the costs of such care simply weren't very large compared to hospitalization, and in part because of the staunch opposition from the AMA. But hospital care ended up being Medicare Part A. A "voluntary" program in which participants would pay a premium to the government in return for coverage of physician care -- the Republican proposal -- became Medicare Part B. Doctors were bought off by the support, and away we went.

And how far we've come! Today, once again, just about everybody recognizes that we face a serious problem. The ranks of the uninsured are growing, medical cost inflation is out of control, and something needs to be done. But once again, Republicans still call attempts to involve the government in a solution "socialized medicine." Only this time, what they call socialism is darn close to what they used to support as an alternative to the heavy hand of government.