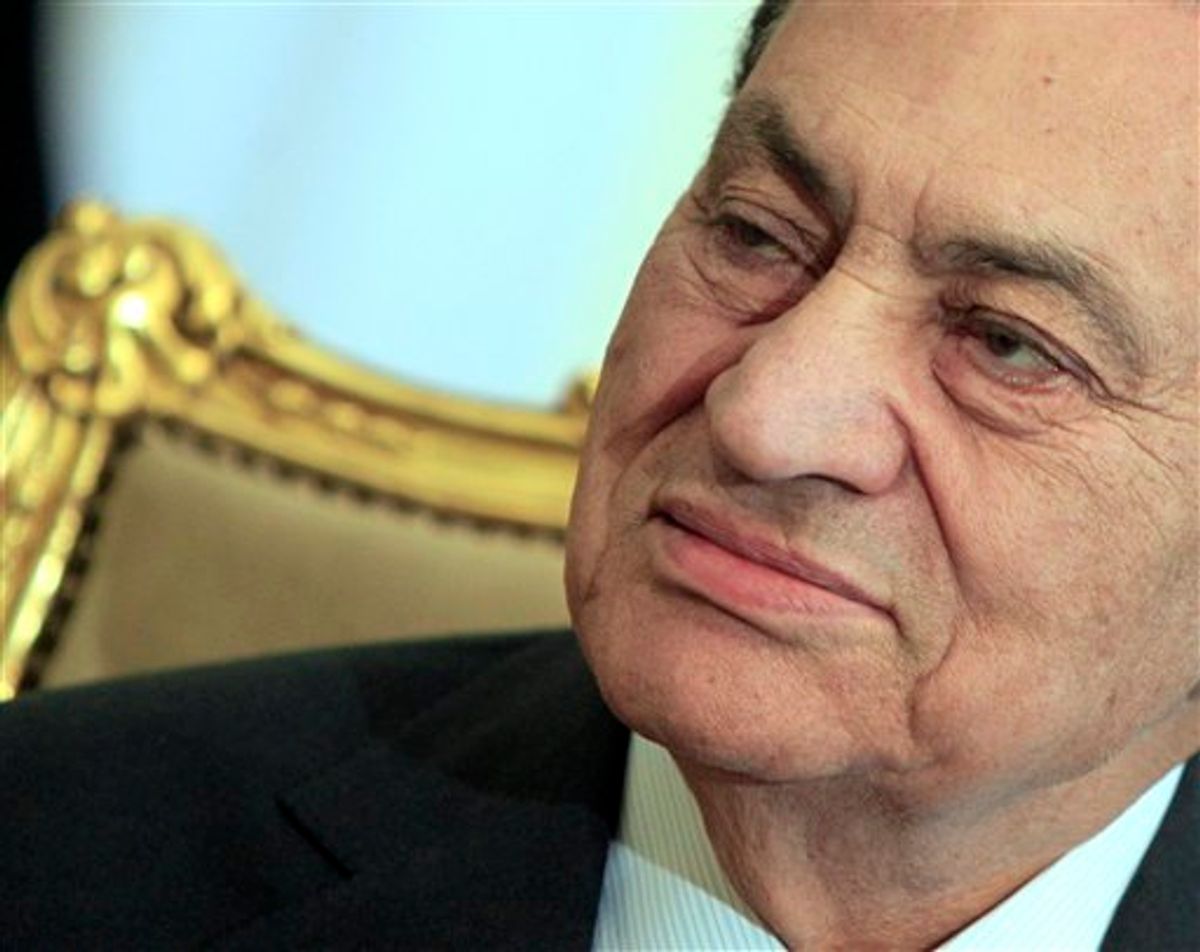 FILE - In this Feb. 8, 2011 file photo, Egyptian President Hosni Mubarak sits during his meeting with Emirates foreign minister, unseen, at the Presidential palace in Cairo, Egypt. An Egyptian security and health official said on Tuesday, April 12, 2011 that Mubarak has been hospitalized in the Red Sea resort of Sharm el-Sheikh. (AP Photo/Amr Nabil, File) (AP)
--

Egypt's ousted President Hosni Mubarak was put under detention in his hospital room Wednesday for investigation on accusations of corruption, abuse of power and killings of protesters in a dramatic step Wednesday that brought celebrations from the movement that drove him from office.

Mubarak's two sons, Gamal and Alaa, were also detained for questioning and taken to Cairo's Torah prison where a string of former top regime figures -- including the former prime minister, head of the ruling party and Mubarak's chief of staff -- are already languishing, facing similar investigations on corruption.

The move reflected the enormous pressure from the public on the ruling military, which was handed power when Mubarak stepped down on Feb. 11. On Friday tens of thousands protested in Cairo's central Tahrir Square demanding Mubarak and his family be put on trial, and many in the crowds accused the military of protecting the former president.

The detention came hours after the 82-year-old Mubarak was hospitalized Tuesday evening with heart problems in Sharm el-Sheikh, the Red Sea resort where he and his family have been living since his fall from power.

Early Wednesday, the public prosecutor announced Mubarak was ordered put under detention for 15 days for investigation. He was to be flown later in the day to a military hospital outside Cairo, where he would remain in detention, a security official in Sharm el-Sheikh said, speaking on condition of anonymity because he was not authorized to talk to the press.

Protesters had pushed hard for Mubarak's prosecution, demanding what they called a clear signal that the corruption that pervaded his nearly 30-year rule would be definitively broken. Public outrage was widespread over allegations that large fortunes were skimmed off by top regime officials through shady deals over the years.

Beyond the anger has been the fear that Mubarak cronies are maneuvering to regain power as the country tries to work out democratic rule -- and that the ruling military was not taking action to prevent them, or was even abetting them.

"I was so happy in the morning when I heard the news," said Ahmed Maher, co-founder of the April 6 group, one of the movements that led the unprecedented 18-day protest movement against Mubarak.

"All people are very happy because this step reassured them after a period of doubts and stagnation," referring to doubts over the military's intentions, he told The Associated Press. Worries over the military were intensified by a fierce pre-dawn raid on protesters in Tahrir on Saturday that killed at least one person.

Still, he said, Egypt faces a long road to ensure the transition period leads to real democracy. "Trying Mubarak and his regime is very important but what is super important is the political future of Egypt and what kind of political system we want to have," he said.

But the coalition underlined that there are still demands left unfulfilled -- including the dissolving of the former ruling party and the sacking of Mubarak-appointed governors as well as university deans and local city councils, both seen as levers of his regime.

Activist Amr Bassiouny said in a Tweet that the detention was not the protesters' primary goal but "free speech, free assembly, free press -- no torture, real democracy, end of lies."

Since Mubarak's fall, activists have complained that the Armed Forces Supreme Council, the body of top generals that now rules Egypt, has been dictating the post-Mubarak transition without consultation. Relations have rapidly soured over past week, amid reports of abuses by the military that reminded some of Mubarak's rule -- including torture of detained protesters and the imprisoning of an activist for criticizing the army

Protesters have criticized the army for being too close to the old regime and not swiftly bringing Mubarak to trial while hundreds of protesters remain in military detention, some convicted in swift trials before military courts.

In its announcement, posted on the social networking site Facebook, the public prosecutor said Mubarak was under investigation into allegations of assaults, killings and injury of protesters, corruption, squandering of public funds, and the abuse of authority for personal gain.

Hundreds are estimated to have been killed during the protests as police opened fire and cracked down on the crowds. Officials put the number of protesters killed during the uprising at 365, but human rights activists and others have said the figure is much higher. According to a count by the Front to Defend Egypt Protesters, a group that provides medical and legal assistance to the demonstrators, 685 people died as of March 7.

On Sunday, Mubarak defended himself in a prerecorded message saying he had not abused his authority, and investigators were welcome to check over his assets.

It was his first address to the people in the two months since his ouster. He has kept a low profile since he was ousted, living on his compound in Sharm el-Sheikh. He and his family were banned from traveling and their assets frozen.

Shortly after, the prosecutor general issued a summons for Mubarak to appear for questioning.

Soon after the hospitalization Tuesday night and in a sign that his ailment might not be very serious, Justice Minister Mohammed el-Guindi said Mubarak was then questioned in his suite for his role in the violence against protesters. The ministry statement on Facebook said Mubarak's lawyers and a medical team were present during the interrogation. Mubarak has a history of minor ailments and underwent gallbladder surgery in Germany in March last year.

While the ex-president was taken to the hospital in Sharm el-Sheikh, where he has been living since being removed from power, his sons were taken for questioning to the nearby courthouse.

An angry crowd of 2,000 people had gathered outside the hospital late Tuesday, demanding the sons' arrest. Then, in the early hours Wednesday, head of provincial security in the South Sinai told the crowd that Gamal and Alaa would be detained.

"Brothers, whatever you wanted, you have got ... 15 days," said Maj. Gen. Mohammed el-Khatib, as the crowd erupted in cheers.

As a police van with drawn curtains took away the brothers, the crowd pelted it with water bottles, stones and their flip-flops, as a sign of contempt.

Over the past decade, Gamal had risen to the top ranks of the ruling party and was widely seen as Mubarak's designated succession. Anger over that prospect helped galvanize Egypt's protest movement. Gamal brought into government and the ruling party a number of top businessmen who led an economic liberalization program that brought in billions in foreign investment but has also widened the gap between rich and poor. Several of those businessman-politicians now face trial or investigation for allegedly using their positions to amassing fortunes. His brother Alaa is a prominent businessman.

Egyptian stock market's posted moderate gains Wednesday with investors buoyed by news that Mubarak and his sons have been detained. The market had been relatively stable in the days after its reopening late last month, following a nearly two-month closure linked to the anti-Mubarak uprising.