Obama climbs back into the ring 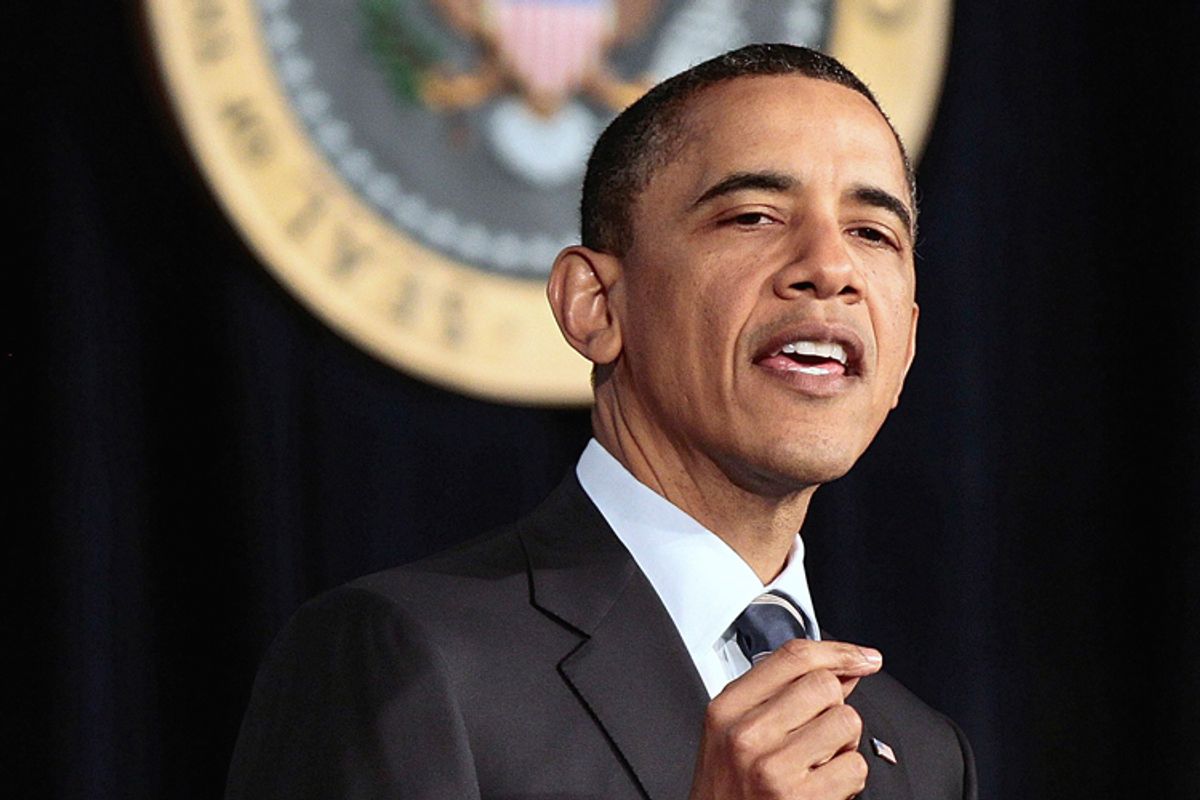 Every now and then, Barack Obama gives a speech that reminds you how he got elected and makes you wonder why the heck he doesn't hit home runs like this more often. Tuesday's deficit reduction speech provided one of those wake-up calls.

The president came out swinging hard against House Budget Committee Chairman Paul Ryan's recently released budget, accusing House Republicans of wanting to pay for tax breaks for the richest Americans by forcing seniors to pay more for their healthcare. He made a direct pledge that he would not allow Bush's tax cuts for the wealthy to be extended -- "I refuse to renew them again." He doubled down on healthcare reform, declaring that the savings his plan would seek from Medicare and Medicaid would be a result of consolidating and advancing the cost control initiatives included in the Affordable Care Act -- the goal, he said, is to lower the cost of healthcare, instead of reducing the level of government commitments to the elderly and the poor.

He gave an incisive summary of the history that has led us to this point, including the fiscal mismanagement of the George W. Bush presidency, the imperative of dealing with the economic crisis, and the looming retirement of the baby boom generation. And while hammering at the House Republican budget plan, he made as clear a statement about the profound injustice of growing inequality in America as I've ever heard from him:

Worst of all, this is a vision that says even though America can't afford to invest in education or clean energy; even though we can't afford to care for seniors and poor children, we can somehow afford more than $1 trillion in new tax breaks for the wealthy. Think about it. In the last decade, the average income of the bottom 90 percent of all working Americans actually declined. The top 1 percent saw their income rise by an average of more than a quarter of a million dollars each. And that's who needs to pay less taxes? They want to give people like me a two hundred thousand dollar tax cut that's paid for by asking thirty three seniors to each pay six thousand dollars more in health costs? That's not right, and it's not going to happen as long as I'm President.

The fact is, their vision is less about reducing the deficit than it is about changing the basic social compact in America. As Ronald Reagan's own budget director said, there's nothing "serious" or "courageous" about this plan. There's nothing serious about a plan that claims to reduce the deficit by spending a trillion dollars on tax cuts for millionaires and billionaires. There's nothing courageous about asking for sacrifice from those who can least afford it and don't have any clout on Capitol Hill. And this is not a vision of the America I know.

If there were low expectations for this speech, Obama undoubtedly exceeded them. One had to marvel: Was this the same president who gave such a lackluster State of the Union speech, and whose fiscal 2012 budget so carefully avoided tackling any of the big problems? Why hasn't Obama been making this case all along? Was he saving his fire until he succeeded in luring overreaching Republicans out on a limb?

Whether the math adds up on Obama's deficit reduction proposals will be furiously chewed over by a legion of budget geeks in the hours and days to come. A fact sheet providing a more granular level of detail than was present in the speech was released by the White House shortly before the address, and a quick review suggests that there is some substance to the proposals. But Obama's claim that his plan will reduce the deficit by $4 trillion over the next 12 years  includes tax hikes, cuts in defense, and a successful implementation of healthcare reform that delivers on cost-savings that are as yet speculative. That won't be easy to achieve.

There is also the very real question of how what Obama proposed gets translated into bargaining over the debt ceiling. In his speech, Obama outlined a "debt failsafe" that would force Congress into mandatory spending cuts if it didn't reach the levels of debt reduction included in his plan. This is the kind of thing that almost never works in practice, but it could be the kind of bargaining chip the White House might offer in return for a vote to raise the debt ceiling. And yet it's hard to imagine the House Republicans accepting it without a major fight.

If Obama's speech means that he intends to fight, the next few months could be a lot more interesting than dispirited Democrats were expecting. And for all those Republican presidential candidates milling around trying to distinguish themselves from the pack -- they just got a good, hard look at the candidate they'll be attempting to overthrow.