What to watch for in Obama's deficit speech

If the president can convince swing voters he's more reasonable than the GOP, he wins 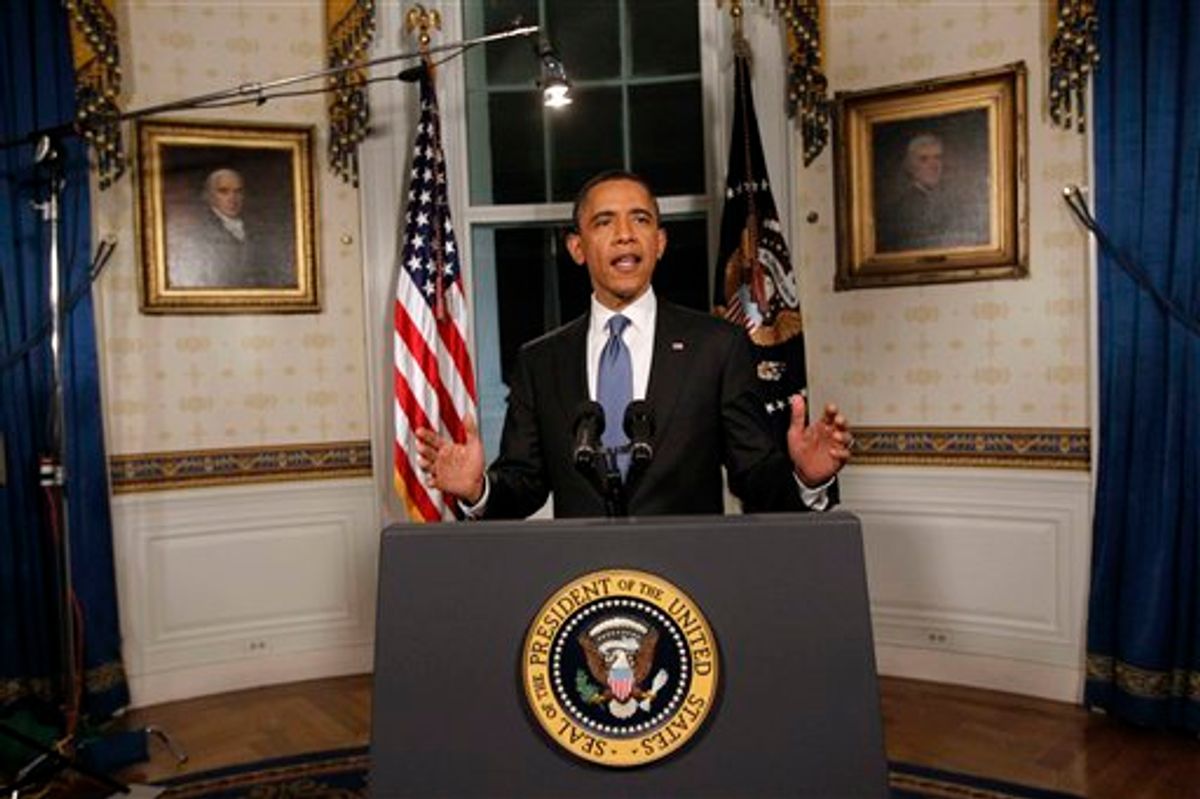 FILE - In this April 8, 2011 photo, President Obama poses for photographers in the Blue Room at the White House in Washington after he spoke regarding the budget and averted government shutdown after a deal was made between Republican and Democrat lawmakers. The Treasury Department reports on the federal budget deficit for March. In February, the government ran the largest-ever budget gap for a single month. The shortfall kept this year's annual deficit on pace to end as the biggest in U.S. history, $1.5 trillion. And that's not likely to change much, even after President Barack Obama and congressional Republicans struck a deal last week to cut $38.5 billion from this year's budget. (AP Photo/Charles Dharapak) (AP)
--

To say that expectations are low for President Obama's speech Tuesday afternoon outlining his plans to reduce the long-term budget deficit would be a definite understatement. Republicans are already dismissing whatever he will say as insufficient, and preemptively warning that any call to raise taxes on the rich is a "non-starter." Democrats are nervous that Obama has already conceded too much ground to the GOP, and will propose cuts in key entitlement programs that they regard as among their party's greatest achievements. Even worse, Obama has done a poor job as president when he attempts to deliver policy-focused speeches. He tends to be skimpy on details and broad on generalities, laboring to be all things to all people and ending up satisfying no one.

But Obama probably isn't aiming this speech at either Democrats or Republicans. Self-styled "independent" voters are the likely target -- the swing voters who often decide elections. Judging by the majorities of Americans who approved Obama's tax-cut deal with Republicans and who appear to be relieved that Washington managed to avoid a government shutdown, those independents, broadly speaking, are satisfied with Obama's recent performance, even if the Democratic base feels betrayed and the Republican base thinks he's the second coming of Vladimir Lenin.

So what does Obama have to do to keep independents happy in his speech? The answer to that is pretty simple: He just has to present himself as more reasonable than the Republicans. There's a conventional wisdom running around Washington that by letting Republicans go first in laying out a long-term deficit plan, Obama has demonstrated himself unengaged with the "process" and has allowed the GOP to define the terms of the debate. But that ignores the fact that the Ryan plan is a pretty radical proposal that has no chance of passing the Senate and, the more people become familiar with it, is unlikely to generate broad popular support. Medicare is a hugely popular government program -- does anyone remember how many Tea Party protesters warned Obama to keep his hands off it? Transforming it into a voucher program is going to be a hard sell.

So now Obama has the chance to present his own strategy, which by definition will be less radical than Ryan's, while at the same time likely proposing entitlement trims that Democrats won't like. But that's probably exactly where he wants to be.

The question is whether he can deliver enough details to convince listeners that he is serious. How specific is Obama willing to get? What's the plan on Medicare? How much effort will he devote to pushing for an end to the Bush tax cuts for the wealthy? Will he take a real whack at defense spending?

It shouldn't be hard to distinguish his own plan from the GOP agenda -- after all, majorities of Americans theoretically support higher taxes on the rich and are awfully fond of Medicare and Social Security. But that's predicated on there being an actual plan, instead of simply yet another platitudinous restatement of focus-group-tested generalities.